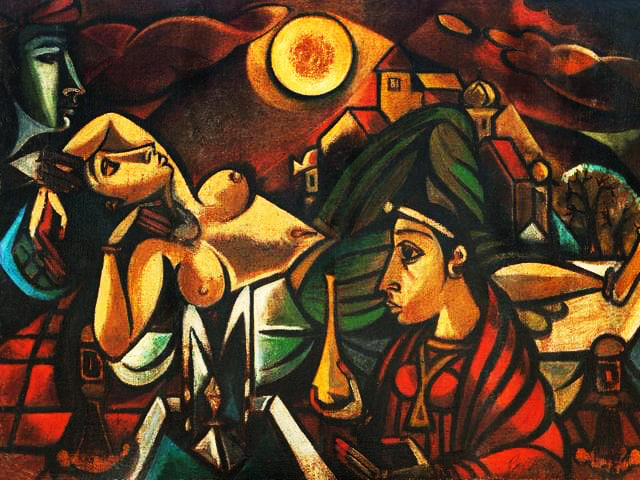 Ending the previous discussion by commenting on the White supremacist beauty standards of the European and its former inspiration, the Greco-roman heroic nude imparted morals, not so far away are the renaissance artists of Indian culture from that hypocritical society. The Indian society, which is based on a mythological culture of gods and goddesses, has become oblivious to the fact that it is not the same notion of the heroic nude that would pave the way for future society's open-mindedness, but one of their own. Indian renaissance artists, however small a window they got (the window is closing now with the mob lynching and slut-shaming propagated by religious terrorism that desires for a secular Hindu nation), used the opportunity to push boundaries of the social reality. Questioned then and even now are the artists who have included traits of a superior culture that put beauty of the human body through artistic representation. The chances a lady would be raped were more in the past than it is today. So were the chances for one to find brothels. In a society with so many options for sexual satisfaction, why would artists indulge in hours of dedication to nude art?

Alambusa, Misrakesi, Vidyutparna, Raksita, Manorama, Kesini, Subahu, Suraja, Surata, Supriya, Tilottama, and Rambha, the creation of celestial beauties amidst goddess are not with the same purpose of the heroic nudes of Aphrodite, or Venus. It brings us to a conclusion that the Indian classical theories concerning the aesthetic superiority and acceptance for naked energies do not concentrate on the existence of an academic nude, the Kamasutra, but part of a broader-minded society mentioned in Vedic literature. The nude Shalabanjika hanging by the tree branch is no less than Venus, representing forces of fertility in a parallel society. Life outside the embellishments and clothing often pointed towards the union of the creator and the creation. 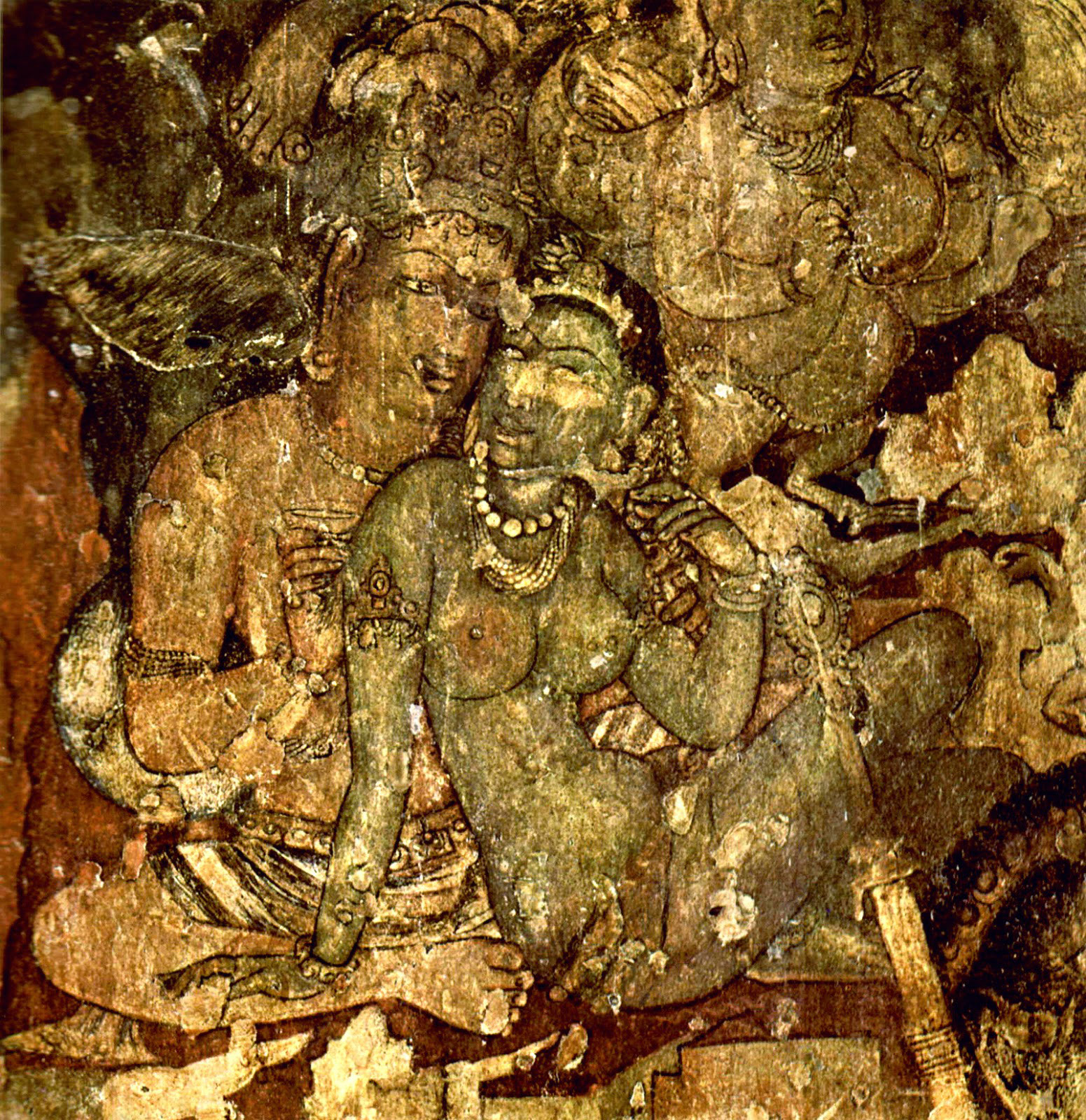 Apart from creating realistic nudes like the Greco-Roman, the cluster of Khajurao erected between 900 and 1050 C.E. and Konark, Puri temples, and the impeccable murals of the Ajanta was an artistic depiction of an idea and not. It would have been the challenge posed by their naked bodies that the artists found interesting when the skills required to make their work look godly, otherwise look like a wannabe piece of art. To have hidden the beauty of the creation and the creator would have been a crime. It may be the same reason why we find the exteriors of some temples embellished with such artistry. And this was incorporated only in a handful of temples between the 10th and 13th centuries for their didactic purposes. 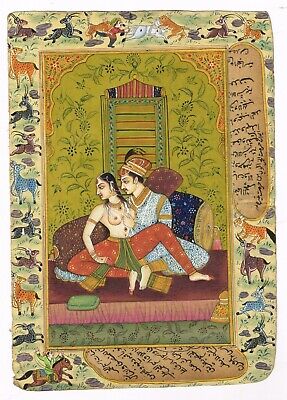 The Hoysala, Chalukya, Gupta, Pallava, and Mauryan periods saw art flourish, while marvels like the Halebeedu-Belur conglomerates were left out. By this time, miniature paintings had already been a part of the grandeur the culture cherished. A strong Hindu motivated society, which is often condemned for its caste-based differentials, did understand nudity on temple walls to be different from porn. The Muslim invasion also contributed to a permuted art society. Along with the great Vijayanagara empire that has been recognized as an amalgamation of the better in Victorian and Renaissance ideologies, again did not frown upon their ancestry but continued flourishing reality as art seemed fit. All this proves to be true of Brecht commenting, ‘Art is not a mirror held up to reality but a hammer with which to shape it.’ Followed in this ideology was another explosion of art in the Mughal period.

Not only did these art forms contain nudity, but they also discussed trans-genderism and same-sex affiliations. These themes being described and represented equally in temple art strengthens the idea that nudity was not important to the painters. A great shift in this morality was brought by the prudish British hypocrisy fuelled by Victorian influence. 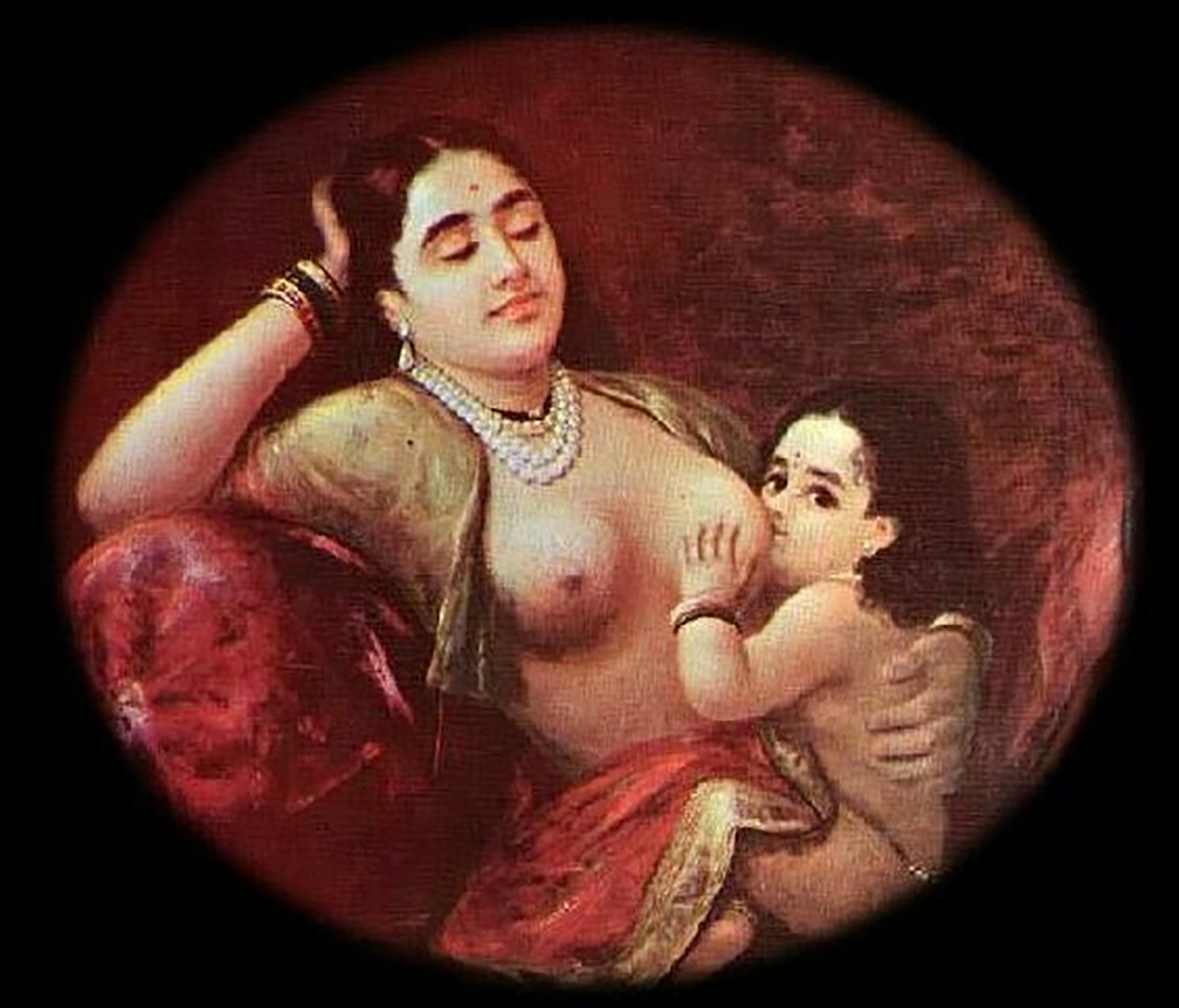 Motherland suppressed, women already thrown away into the darkness, our people enlisted under the Criminal Tribes Act, raiding every last corner of the country for indigenous treasures, and still, foreigners consider our society to be pagan. Composed in European, and conjoined with a pan-Indian aesthetic, Ravi Varma took the first step into the renaissance of Indian nude art. Draupadi, in her Sairandhri form, is shown to be shaken by the presence of the foreigners to whom her husbands have already forgotten their identity and have become servants. His paintings explain not the rules that governed portraiture but how clean it has been against many such conventions. Taking the spirits to form the European styles, putting them into the Indian matrilineal society, a one which only he knew better, Ravi Varma’s portrait, the Bharani Thirunal Mahaprabha Amma Thampuran (1880) is a reflection as equally strong With similar poses from the Olympia by Manet, one can see his inspirations in the Reclining Nair lady (1897) but devoid of its prurience. His nudes, just like his portraits, were not for the ordinary man.

Followed by The Indian Society of Oriental Art founded by E. B. Havell and Abanindranath Tagore from the Calcutta School of Art in 1907, the Indian Art scene was revived with elements that it used to be known and what will be known as treasures of Indian Known as the ‘Bengal Renaissance’ or the Bengal School, the mid-19th century was a time of cultural flamboyancy. If it was the centuries between the 14th and 17th centuries that played as the renaissance in Europe, then here in India it was the 19th century. The artistic marvels of Aurendra Ganguly, Nandalal Bose, K. Venkatappa, Hakim Khan, Asit Kumar Haldar, and Samrendranath Gupta, etc., became the faces of Indian renaissance art. Blending Hindu, Persian, and Japanese ideologies of painting, Abanindranath Tagore opened a door that put India on the world art map. 'The Passing of Shah Jahan,' 'The queen of Ashoka,' 'Aurangzeb,' 'Radha Krishna' and 'Buddha the Mendicant,' are all examples of this symbiotic creativity. On the other hand, 'Shiva mourning over Parvati,' 'Sati,' 'Uma's grief,' 'Garuda,' and 'Kaikeyi,' by Nandalal bose became exquisite expressions. His recreation of the Ajanta has become a marvel far foreseen by any who came before him. Mukul Chandra Dey, Rabindranath Tagore, and Amrita Sher Gil became voices that reflected a much more vibrant renaissance in India compared to that in any other region in the world.

In recent years, artists like M. F. Hussain, Mali, V. D. Chinchalkar, Abani Sen, Kamala Das Gupta K.H Ara, and F.N Souza have adopted from Europe-post-impressionism and western influence, creating an evolving scenario that is collectively significant and singularly distinctive. The Bombay Progressive Arts Society in 1947 became home to ideas of these sorts. MF Husain’s grisaille painting of 1965 that depicts an abstract Cubist landscape of two men in sexual harmony as well as his K.H. Ara’s oversized zaftig women, employs visual equilibrium between what is chaste and what is licentious Like the Naked Saraswati of M.F. Hussain that created tremors in Indian morals, Hindu idealism, and sexual potency that once again puts forth the age-old ideals of nudity to be a purity of the soul, are often the pro whereas, F.N. Souza’s uniqueness came from various schools of renaissance and European styles together. The Art brut movement, expressionism, cubism blended with traditional Indian folk art can be seen between the hues created by the artist who has often covered nude Christian characters. To an artist today, a short period of the artistic explosion has become a stable platform for the nuances to emerge that would shape tomorrow's society. Rather than falling into a society that condemns the nakedness of the human self, it is challenging as much as before to represent the complexities of society by drawing their nudity.­­ The renaissance in Indian art may be followed by an Indian version of the Victorian repulse to romanticism. But that is what art has to offer. It is the driving force that makes humans do wonders and not the other way around.