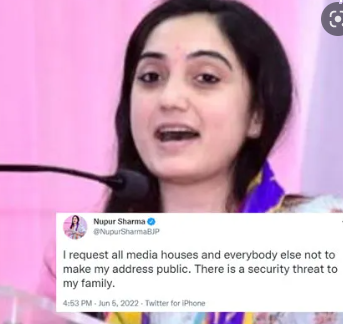 Nupur Sharma's controversy ignited an ever-burning fire with increasing vigor. Nupur Sharma was the national spokesperson of the BhartiyaJanta Party till the turn of events that led to her temporary suspension in June 2022. Often termed brash and candid in her views, she has frequently represented BJP on Indian Television Debate as an official spokesperson. As a student, pursuing a degree in economics at Delhi University, Nupur began her political journey as the President of ABVP and started appearing on news channels on behalf of RSS. Her statements caused a boycott of Indian products in other countries. There were protests at many places in India, some turned into violent accidents of stone-pelting, such as the ones in Jharkhand, West Bengal, and UP, where policemen were injured. Added to this many countries started demanding apology from India for its biased behavior.

The controversy began with the issue of the Gyanwapi Mosque rather than Nupur Sharma’s alleged comment. On April 2022, Varanasi Court ordered a videographic survey in the Kashi Vishwanath Temple and the Gyanwapi Mosque complexes, based on a petition. After the survey, an object was discovered in this mosque, which people claimed to be the ‘Shivling’. On the other hand, some people claimed it to be a fountain. There was no investigation into it to find out what it was, but it was extensively discussed on social media. Many people were mocked on social media saying, anything can be called a Shivling, from Bhaba Atomic Research Centre to a discarded traffic barrier. These jokes hurt the sentiments of  people claiming their God Shiva was being ridiculed, that too in form of ‘Shivlingam’.

During the same time, a DU Professor Rattan Lal made an objectionable social media post, followed by an FIR and arrest. He was charged with section 153A for promoting enmity between different groups on the ground of religion, and Section 295A for a deliberate act to outrage the feeling of any class by insulting their religion. Dr. Rattan Lal defended his post by saying that no matter what you say in India, you will hurt someone’s sentiments, and there is nothing new. Several people backed him up claiming it was his right to freedom under Article 19 of the Indian Constitution. On the other hand, some criticized his action by saying that there are reasonable restrictions on a person’s freedom of speech, which doesn't give the liberty to hurt one's sentiments. He is put on trial with the decision pending in the hands of the guarantee of rights.

Nupur Sharma came on the news 24 program and passed some controversial remarks on Islam and Prophet Mohammad in response to a heated platter with Taslim Rahamani, who continued claiming the Shivling as a fountain. News 24 Anchor Manak Gupta tried to prevent her from saying any further hate comments, and she left the program in the middle. On the same day, she appeared on Republic Bharat and passed the same comments on Islam and Prophet Mohammad again. The anchor warned her against any personal remarks and against hurting any religious sentiments, but she did not stop. At 9.00 PM she went on TimesNow and repeated the same thing. Slip of tongue? It seemed as if she vented her anger in response to insensitivity to Hindu sentiments. According to her own words, she could not tolerate that some people were insulting Mahadev. It is up to the Court to decide whether she violated Section 295 A, and whether her comment offended reasonable strong-minded, firm, and courageous people.

There comes the culprit, Washington Post columnist  Rana Ayyub who termed it as a publicity stunt and lashed out at BJP for hurting muslim sentiments,thereby, creating a whole international fuss. Backed by influencial and powerful people, she was successful in provoking foreign countries, who began lashing at india for a party’s spokesperson’s comment.

Had the same protocols been followed as in the case of RatanLal, the matter would have ended right there. If found guilty, she would have been convicted and punished or else, acquitted. But, no such action was taken against her. The action and inaction of the police for the same things are to be noted. Alt news facts checker Mohammed Zubair, pointed out a person Ilyas Sharafuddin, a regular debtor who had openly mocked the Hindus for idol worshipping, and Shivling worshipping on the Zee News.  Zubair and others demanded action against Ilyas because he had hurt religious sentiments. This debate had lasted for 20-30 minutes, and the anchor did not stop him. Was it a way to increase TRP? Do these TV channels place a Moulana on one side to insult Hindus and then place a Hindu on the other side to insult the Muslims? So the inflammatory speeches continue from both sides and keep creating controversies around them, grabbing attention.

AIMIM chief Asaduddin Owaisi tops the list of hate speeches followed by insult to Hindu Gods to the extent of terming them result of plastic surgeries. Along with Nupur, her colleague Navin Kumar Jindal also made several tweets against Islam and there was no action against him as well. During this period, Nupur Sharma’s clip and Navin Jindal's tweet went viral on the internet, even in Arab countries. The facts spoken by Nupur are backed by Sahih al-Bukhari, one of the most trusted and six major collections of hadith . In book 67, hidayat 70 it is stated clearly that prophet Mohammad married Ayesha when she was 6 and consummated the marriage once she reached 9 years of age. She said facts but her comments were edited, cut and misinterpreted by people who couldn’t digest peaceful speeches without hate or any commotion. Sixteen countries issued statements against India. Some Arab countries even started boycotting Indian products, demanding an apology from the Indian Government.

Gulf countries are significant to India for oil and trade needs. Analyzing the damage, Modi Government went into damage control mode. Indian Embassy spokesperson said that, the tweets don’t reflect the views of the Indian Government and the tweets were by fringe elements. This got Nupur Sharma suspended and Navin Jindal expelled. Navin later deleted his tweet with a simple apology, and Nupur Sharma issued an unconditional apology. Still, she received multiple rape and death threats, encircling her family too from Islamist fundamentalists.  BJP issued a press release saying that BJP respects all religions and is strictly against insulting any religion.

Finally, Delhi Police registered two FIRs, one against Nupur Sharma and the other against 31 people including Owaisi for allegedly hurting religious sentiments and spreading hate. Many people stood by Nupur Sharma saying it was her freedom of speech, and no FIR should be lodged. Similarly, many people also stood in favor of Dr.RattanLal.

All opinioned people can be split into three categories; First is the Honest Conservative people, who will not tolerate any criticism against any religion; Second is honest liberal people, that support freedom of expression blindly. The third category is Hypocrite, who cannot stand any criticism against themselves but are ready to put forth endless criticism over the other religions.

Communal riots are common everywhere. Where there exist diversities, differences in opinions are bound to happen. But that doesn’t points towards eliminating one idea, both can coexist. Starting from Israel-Palestine conflict to Russia-Ukraine issue. Killing of Uyghur community, a Muslims minority in China never attracted attention. Displacement and bereavement of Rohingyas never got support from foreign nations. Coincidently, India was the only country to offer support. USA treats Muslim passengers in different way than other ethnicities. They are made to strip naked for checking purposes in foreign airports. But no country ever raised any question. But when it comes to India, everybody is ready to throw hands. World owes India an apology for its biased behavior.

The entire matter is simple: everyone who uses violence or incites hatred should face legal actions for igniting animosity in the country. We need to understand the difference, and carefully draw the line between hate speech and freedom of speech.