Climate change is at the forefront of likely being the biggest issue the globe is going to face in the coming decades. Countries all over the world are taking steps and measures to reduce their carbon emissions by moving towards electrified, net-zero-emitting vehicles. Environmentalists and urban planners are demanding governments take action, including standardizing the usage of electrified forms of vehicles like trains, inter-regional rail, light-rail, electrified busses, local trams, and of course, cars.

Unfortunately, electrified cars are the go-to vehicle that most people talk about when mentioning the need for “electrified vehicles.” People don’t understand that electrified ‘vehicles’ includes trains, buses, regional rail, etc. Many environmentalists go further as they argue that city planning and urban design need to shift away from the car to diverse modes of transportation.

Many of them will look towards the examples of European cities like London, Amsterdam, and Berlin as cities with exceptional “people-friendly” designs. Part of achieving such a design is to embrace public transportation as a common means to travel within your city.

For example, go to Google Maps, plop yourself into any central downtown street in Amsterdam or London, and compare that to any major North American city. Do this a couple of times, and you’ll see the astounding difference in the quality and quantity of transportation methods in European cities compared to North American ones.

For environmentalists, a shift away from mass usage of cars (be it electric or gas) to public transportation, walking, and bicycles is part of a broader effort to reduce greenhouse gas emissions. According to a new study, if the world biked like the Dutch, we would reduce carbon dioxide emissions by nearly 700 million tonnes a year. That amounts to about a year’s worth of carbon dioxide emissions produced by the entirety of Germany in a year.

One thing worth noting is that Canada has only recently started to take climate policy as a national policy. Prior to Trudeau’s rise to power in 2015, previous Conservative and Liberal governments had no real national vision on climate policy. So Canada has had a late start in taking action against climate change seriously.

Some notable policies the federal government has gotten done include;

the ban of certain single-use plastic by 2023, a national carbon pricing, a national retrofitting program to allow homeowners to greenify their appliances, ensuring all vehicles sold in Canada are net zero-emission by 2035, protecting 15% of Canada’s oceans and increasing investments to protect 25% of our lands and waters by 2025, establishing a national infrastructure fund to support municipal green projects.

One significant policy that transit industry leaders and municipalities are especially esthetic about is the recently announced Transit Fund. This policy that the Canadian government announced last year is a plan to provide a permanent Transit Fund that would spend nearly $6 billion on transit projects across the country starting in 2020 and another $3 billion permanently every year starting in 2026.

For transit enthusiasts, reliable and consistent annual funding for transit could mean more consistency in the planning, procurement, and regularity of projects across the country.

Currently, Canada’s transit funding and project allocation are done on a province-by-province and project-by-project basis with little national financing or direction. As of this announcement, transit in Canada is about to change in a big way.

The focus of this section will entirely be on Ontario, where the provincial government is working on several shovel-ready transit projects.

This section will be divided into discussing the Ontario Line which is an entirely new subway line, and several extensions to current subway lines in the network. In total, these projects will cost Canada $28.5 billion, of which the province of Ontario has committed $11.2 billion and the federal government is committing $10.7 billion.

The Ontario Line is single-handedly the most extensive subway line being built in Toronto. It is a 15.6 km line that stretches from Southern Toronto to its Northeast. The project’s purpose is to relieve some congestive pressure on both Line 1 and 2 in Toronto, which are among the busiest subway lines in North America.

The Ontario Line’s primary purpose is to serve as a brand-new line reducing congestion while, at the same time, increasing transit connectivity across Toronto. This project also serves as a “quality of life” improvement for commuters who will see their travel times decrease by up to 40 minutes.

The project is currently under construction and is slated for completion by 2027. 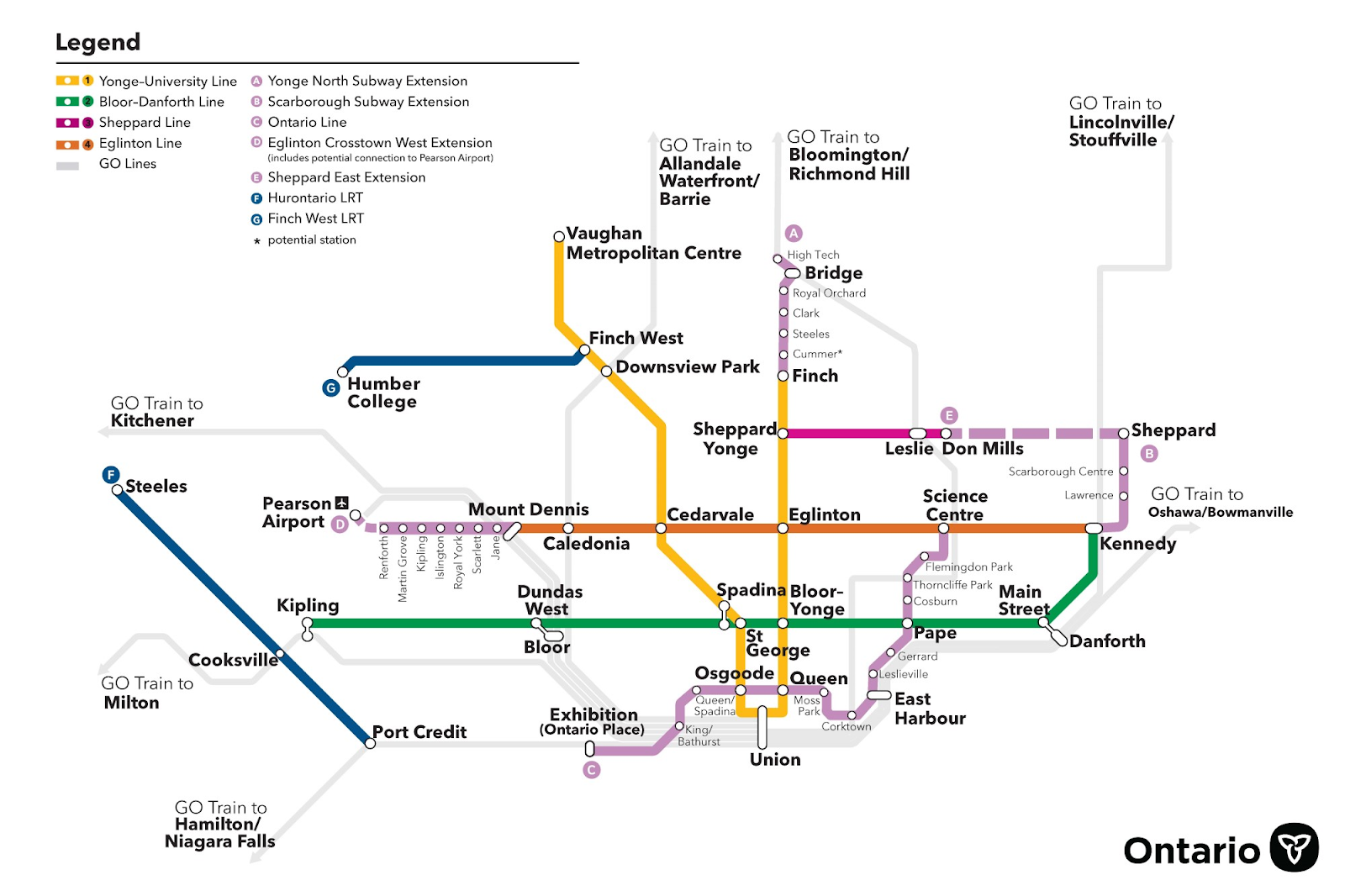 The first extension includes a northern extension on the busiest subway line in Toronto, Line 1, allowing intercity travel from Vaughan to downtown Toronto to Richmond Hill. The Line 1 Extension will also connect to the GO

The second extension on Line 2 East side connects downtown Toronto to the rapidly-growing Scarborough region with three additional subway stations in the city. Although not confirmed, early planning indicates the Line extension may include a connection to Canada’s largest international airport, Toronto Pearson Airport. This would allow for a direct subway connection between Toronto to its international airport.

So, what’s the difference between an LRT and a subway? LRTs usually are much slower than subway trains but are more deployable over a smaller area covering more routes within that area, thus offering more route flexibility. LRTs are also cheaper to manufacture and construct infrastructure for than subways. LRTs also transport fewer people, around 50 to 200, depending on the number of vehicles attached to the LRT.

Now that you know the difference between an LRT and a subway let’s get into the various LRT projects Ontario is currently constructing.

Among the Light Rail Transit (LRT) projects currently in the works. The Hurontario LRT is the most largest and significant project. It serves as an 18km line extending from the rapidly growing cities of Brampton and Mississauga, the two cities that are the heart of the Peel Region in the Greater Toronto Area. In combination, the two cities are home to over 1.5 million people, with the cities projected to populate over 2 million people by the end of the decade.

The Hurontario LRT will serve as the first major transit rail line connecting the two cities. It will help local residents connect between their cities and Toronto through GO regional rail lines or bus routes. The project is expected to be completed in the Fall of 2024.

On May 7, 2018, the contract was awarded to the Mosaic Transit Group to design, build, finance, and maintain the Finch West LRT. Major construction will begin in 2019, and the project will be completed in 2023.

The Finch West LRT is looking to connect Line 1 and Northwestern Toronto to Humber College, which is a major college in the Toronto area. It boasts 11km of rail with 18 stations. The project is set for completion in 2023.

The Hamilton LRT is a stand-alone project that will serve the rapidly growing city of Hamilton. The project boasts 17 stations across a 14km line that connects Hamilton’s world-class McMaster University, its City Hall, a massive football field, and its largest mall, Eastgate Square.

The governments of Ontario and Canada have committed to funding the project for $3.4 billion. The project is in its procurement stage, so no completion date is provided.

The city of Toronto is home to the largest modern tram network in North America. With exactly 200 trams spread across the entire network, the system is known for its modern quality and frequency on its routes. The city is looking to expand its tram network for a population demanding more transit options.

As of current planning, Toronto has ordered 60 more tram vehicles to increase frequency on its existing routes and further expand its network to include routes in the Waterfront area of Toronto within 10 years.

The increased frequency will reduce congestion on the network’s current setup while at the same time offering new routes in the rapidly growing Toronto’s Waterfront area.

Here’s a video by Reece Martin discussing the Waterfront expansion in more detail. Reece is a very knowledgeable public transit enthusiast from whom I’ve learned a lot. His videos will completely change your perspective on the role of public transit in cities. He’s worth the watch.

Ontario’s GO Expansion Project is the largest regional rail project in North America. The goal of the project is to replace all of the current diesel locomotive trains with faster zero-emissions electric trains powered by Ontario’s 70% renewable electricity grid. The rail lines highlighted in yellow represent which lines will be electrified.

Metrolinx - the public company that owns GO rail - will provide all-day, two-way service on all GO lines. Metrolinx is also going to standardize train service every 15 minutes with peak periods allowing for service every 7-10 minutes.

This project aims to provide adequate regional rail service to allow peripheral cities in the GTA (Brampton, Barrie, Hamilton) to have quicker and better access to Toronto without the need for a car. It is essentially bringing together the region through quick and more efficient transportation.

The rail lines highlighted in yellow represent which lines will be electrified completely. This includes the Kitchener line, Lakeshore East and West Lines, the Stouffville Line, and the Barrie Line. Moreover, two rail lines that are not being electrified but will receive substantial service improvements nonetheless include the Richmond Hill Line and the Milton Line. 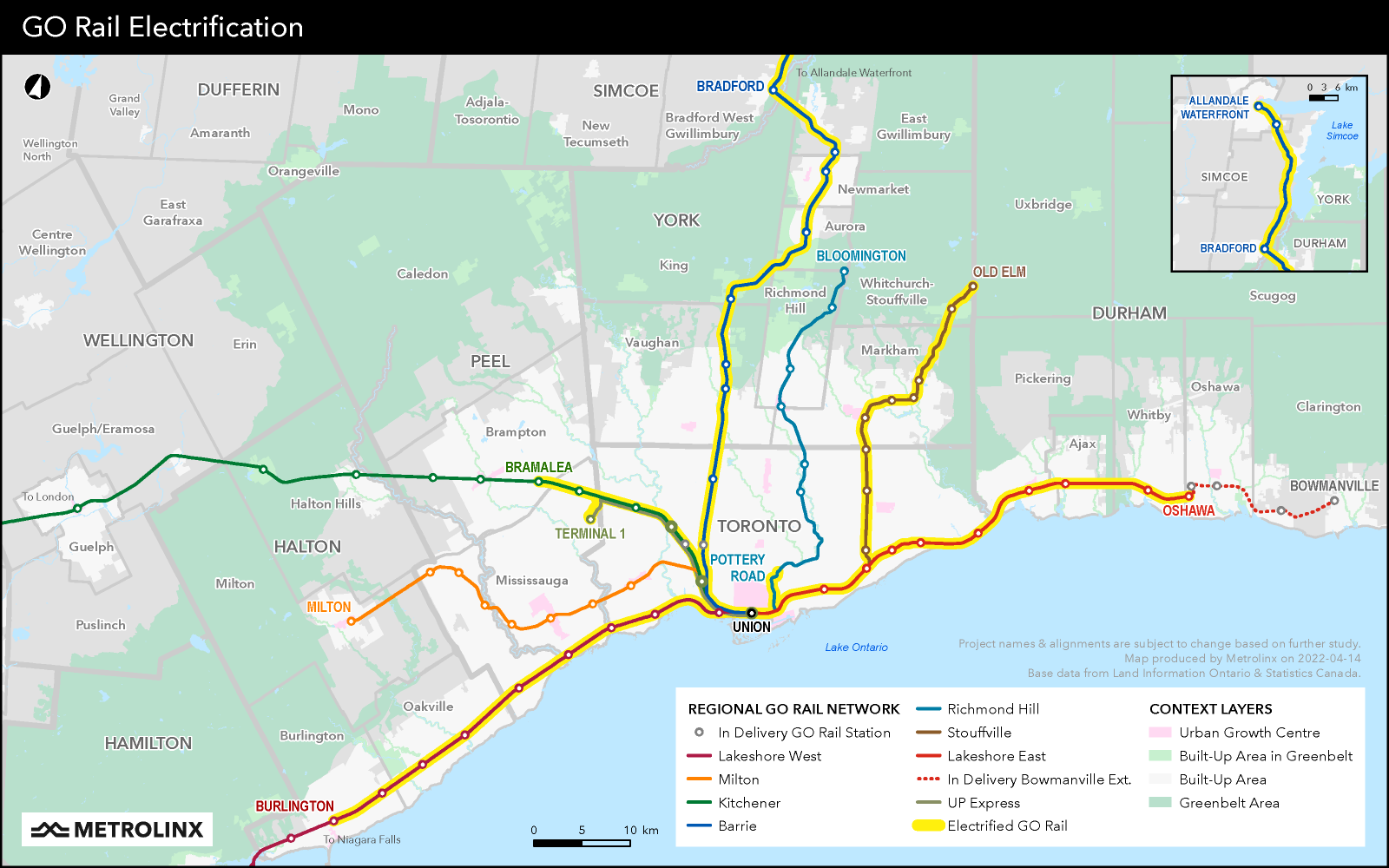 Next Steps for Public Transit in Ontario

A public transit transformation is currently undergoing in Ontario. And the rest of the country is watching in anticipation of the completion of Ontario’s new transit projects and the subsequent public response. However, there’s still much more to be done. There’s room to be more ambitious and go even further to serve Ontarians with better, more accessible public transit.