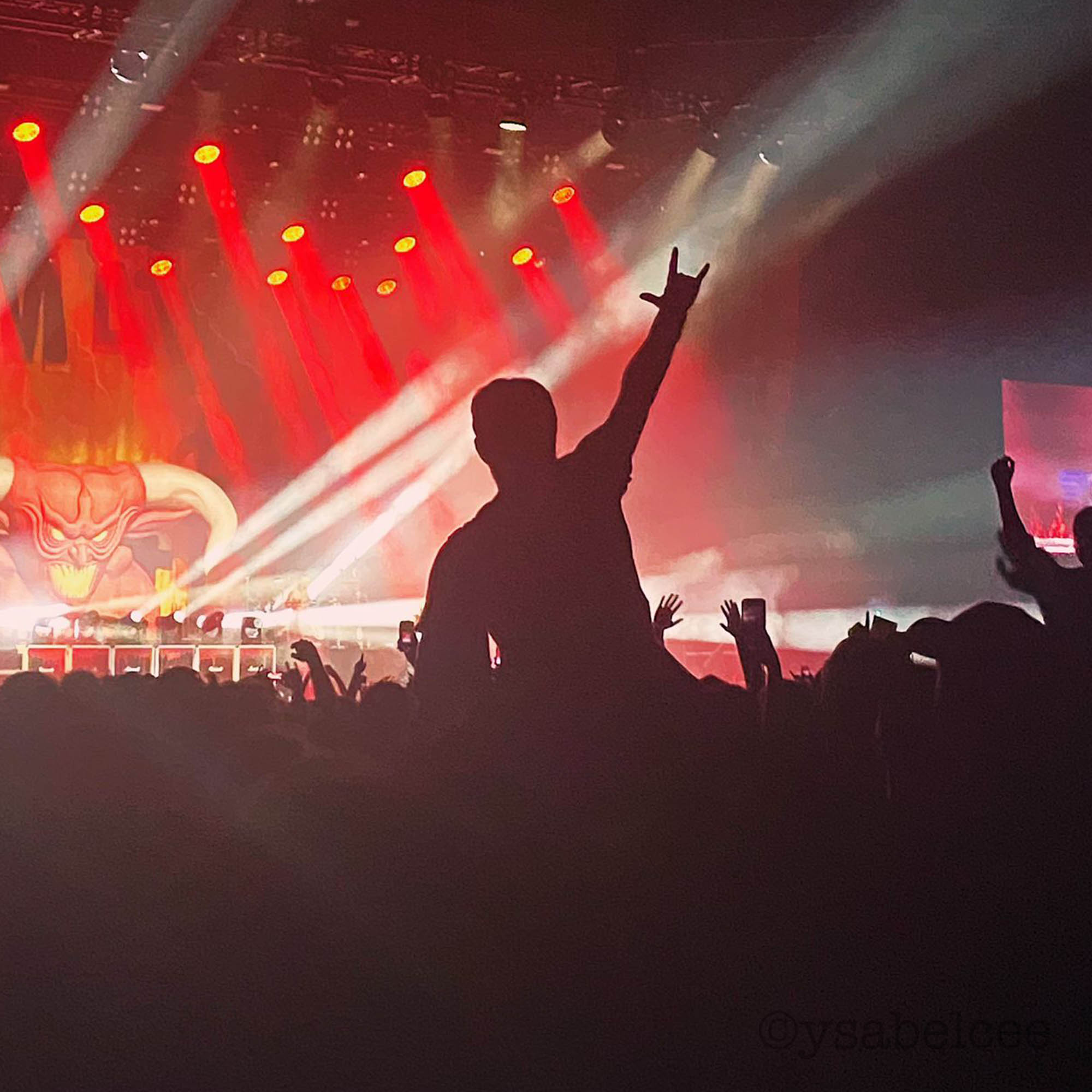 A week ago, I found myself singing and jumping along with tens of thousands of people as our favorite Canadian punk bands, Simple Plan and Sum 41, performed their hit songs onstage in Madrid. My face was hurting from smiling so much. About 36 hours ago, I was home in Barcelona, casually scrolling through Instagram, when I came across Simple Plan’s post, thanking their fans in Bilbao before adding, “then it’s on to Madrid.” The city would be their last stop in Spain before they continued their tour around the rest of Europe with Sum 41 for the Does This Look All Killer No Filler tour.

When I was around 12 or 13 years old, Simple Plan was my ultimate favorite band. My best friend, Isabel, and I would save our allowances and buy Tiger Beat magazines that featured them so we could learn more about them and ultimately feel more connected to them. We dutifully watched their new music videos on MTV and Myx and memorized all their lyrics so we could sing along. And yes, we wore all black to look as punk as we could at 12.

I hesitated to buy a ticket to their upcoming show at the last minute, mainly because I was going to go alone (and Isabel now lives in the Philippines.) But she and my other two cousins urged me to go anyway. “You only live once,” they all said. So, with that in mind, I booked a concert ticket and then a train ticket to Madrid for the next day. A friend in Madrid let me sleep on her sofa bed that night.

It had been around 15 years since I last heard the lyrics, “‘Cause I’m in too deep/ and I’m trying to keep/ up above in my head/ instead of going under.” Yet I still sang them (albeit off-key) with as much enthusiasm as I did when I was 13. Despite feeling self-conscious about going alone and looking stupid, I didn’t feel lonely. Everyone wore their old punk t-shirts, sang along, and had their hands in the air. The crowd had grown up listening to the performing bands and were now all grown up, most of them presumably had work the next day, yet they still partied as if it was a Friday night after school (instead of a Tuesday work night). Maybe at one point in our adolescence, we collectively felt lonely, longed for acceptance, and felt misunderstood, and these songs either helped us feel seen or understood.

Setting the stage for punk rock and pop punk

Punk rock is a subgenre of rock ‘n roll, aptly described as “the rejection of the trappings of mainstream pop music.” The music contained raw energy, fast tempos, lyrics that were shouted, not sung, simple melodies, and “a do-it-yourself work ethic that allowed them to thrive in the music industry,” according to masterclass.com. Punk rock burst into the scene in 1976, supposedly in New York. Some examples of singers and bands in that era are the Sex Pistols, Patti Smith, The Clash, The Ramones, and The New York Dolls.

This subgenre also emerged in the 1970s and combined punk rock with pop music. It gained more traction in the ’90s and ’00s for its themes on adolescence, anti-suburban life, and relationships. Bands such as Green Day, Blink-182, New Found Glory, Paramore, and Fall Out Boy, and Avril Lavigne, the pop-punk princess, dominated the radio.

The punk scene as a whole fizzled out around the 2010s onwards. Perhaps it was because the music was inherently juvenile while its target audience began growing up, graduating college, and moving on. But punk (whether rock or pop) never indeed went away.

The resurgence of punk

“Pop punk has become a defining sound of 2021,” declared the Guardian last year. The punk genre began experiencing a mainstream resurgence amidst the pandemic. There was a new wave of pop punk: Machine Gun Kelly, Olivia Rodrigo, and Yungblud. There also seem to be more women dominating the scene, like Rodrigo, Meet Me @ The Altar, and Willow.

Billboard credits Travis Barker, the drummer for Blink-182, as the reason for the revival. In 2019, Barker founded his DTA Records record label in partnership with Elektra Music Group. (DTA stands for “Don’t Trust Anyone,” which originally started out as a clothing label owned by Barker.)

Barker's mission was to help develop up-and-coming artists to help bridge the last generation of punks to Gen Z. “As an artist, it's important to me that an artist's vision is protected at all costs,” Barker said a statement. “It's crucial that I'm able to look an artist in the eye and believe it when I say we can take them from a basement to an arena. Elektra's track record and belief are proof of that, and I'm stoked to continue to build that legacy together through DTA Records.”

Barker collaborated with other young artists like Machine Gun Kelly, Yungblud, and Jxdn. The former’s album Tickets to My Downfall hit #1 on the Billboard Top 200 List in October 2020. According to Billboard, it was the first rock album to top the charts in over a year. Meanwhile, Rodrigo’s Good 4 U made the Top 100 in May 2021, marking the first rock-influenced track to top the chart.

Perhaps the combination of what Billboard calls “the energetic live shows, the emotional lyrics, and fresh guitar sounds” has made the new punk music successful chart-topping hits, not just viral trends.

Of course, to capitalize on the punk resurgence, nostalgia, and good music, Live Nation created the When We Were Young Festival for October 2022. This year’s headliner will be My Chemical Romance and Paramore and features other punk bands and musicians such as Avril Lavigne, Jimmy Eat World, the All-American Rejects, Dashboard Confessional, and Boys Like Girls.

Earlier this year, the festival announced a new lineup for October 2023 featuring Green Day and Blink-182 as headliners, which is now sold out. Other bands, such as Good Charlotte, Sum 41, Simple Plan, and New Found Glory, are also performing.

The show in Madrid was a teaser of the punk resurgence coming back in full force. As I dragged myself out of the mosh pit, I found that the songs I loved long ago still resonated deeply for me despite the 15-year gap. It was interesting how I experienced life, friendships, heartbreaks, and disappointments between then and now, so the lyrics had a newer and more profound meaning for me than I did at 13. Yet, at the same time, I still felt like the same 13-year-old girl blasting punk music to distract or cope with a lot of adolescent change and pressures of school.

Adolescence and puberty came with a whirlwind of emotions, and the music somehow found a way to expel negative energy. One of the defining songs was “I’m Just a Kid ” by Simple Plan, released in 2002. The lyrics describe the typical teenager's struggles and how lonely it feels to be a kid. The band sang, “Nobody cares cause I’m alone, and the world is-/ Nobody wants to be alone in the world,” which connected with many people, letting us shout out the lyrics. Bands like Simple Plan, Green Day, and Sum 41 had a way of vocalizing feelings when I couldn’t.

Fast forward to 20 years later, thousands of people sang along to the same lyrics as I did back then. We may have felt like loners back then, but we were, jamming together at one of Madrid’s biggest stadiums. Punk was never “just a phase.”