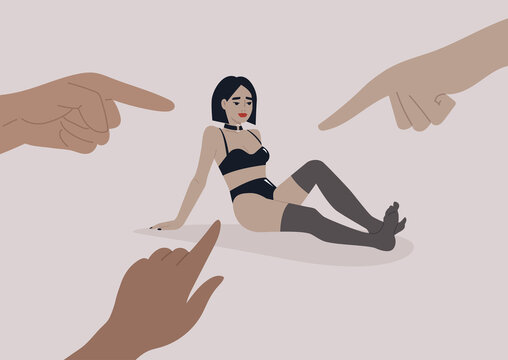 From the Scarlet Letter to the Monica Lewinsky scandal, slut-shaming has been historically utilized to condemn and ostracize women. According to Merriam Webster, the definition of the word slut is “ a promiscuous person: someone who has many sexual partners —usually used of a woman”. Yet, when we think of the word slut, many descriptors outside of this definition come to mind. Namely, a woman who wears less covering clothing. Due to this connotation, women who wear these types of clothes are judged for their character. Marked as women of moral corruption, women of lower class, and women of lesser intellect, simply for their fashion choices. Why is this?

A woman’s choice of clothing does not equate to sexual intent. When looking at clothing magazines or online branding, it is apparent that wearing less is on trend. Even children’s fashion has become more revealing, but we don’t assign the same judgment to them for showing skin. Less clothing could be for comfort, stylistic choices, or simply because it is what someone wants to wear. So why must the assumption of promiscuity, immorality, and other judgments come into play?

To further explore the connection between clothing and assumed sexual intent, I decided to ask individuals about various women’s fashion trends and why they characterize these trends the way they do. I highlighted more revealing clothing articles such as crop tops, leggings, and cleavage-bearing shirts. Many of the younger individuals responded positively to these clothing trends, stating that they were fashionable attire and used words such as “cool” to describe these trends; however, older individuals responded differently. Many older male-identifying individuals described these articles as “inappropriate” and “distracting”. Moreover, the women responded negatively as well, making statements such as, “I wouldn’t want my daughter wearing that” or “low class”. After further enquiring these individuals about what they would think of a woman wearing these clothing articles, they described the hypothetical woman as “wanting attention” or “eager”. Unsurprisingly, these explanations only reaffirm there is a stigma that less clothing signals a desire for a sexual partner.

It is imperative we stop assigning sexual interest to clothing because supporting this train of thought has been used to “justify” harm towards women. In 1989, a woman was sexually assaulted under the “justification” that she was “advertising for sex”. The assaulter claimed this was because, “the way she was dressed with that skirt you could see everything she had.” These assaults have continued, and while #MeToo has made a positive stand against assault, assault still occurs and goes unpunished under the same “justifications” of clothing implying consent. In 2018, a woman’s clothing choices, namely wearing a thong, were used against her when prosecuting her assaulter. Associating a women’s personal stylistic choices with sexual consent has evidently made harmful, potent impacts on women, and we must work to stop assuming sexual interest from pieces of cloth.

It is clear that even with #MeToo’s success, women still face sexual judgment, correlating their consent with irrelevant matters such as style choices. The next time you think, type, or speak a statement that slut-shames a woman for her fashion, recognize the atmosphere you are contributing to. This behavior has created and sustained an environment where assaulters are “justified” in harming women. Do your part and stop slut-ifying fashion.