"Sunrise Over Ayodhya" - Casting a shadow on Tolerance? 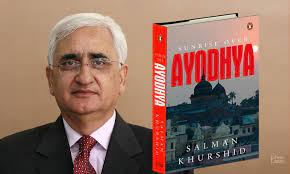 "Sunrise Over Ayodhya" - Nationhood in our times was published in October this year and has cooked up a storm for author Salman Khurshid. The book is about the 2019 verdict about Ayodhya land and explores the history of the case. Khurshid says that "the thrust of the book is to promote religious harmony between Hindus and Muslims and highlights the Ayodhya judgment as an opportunity to find closure on the unpleasant past and look forward to a shared future." With such noble intentions, one might wonder what the fuss is all about. The controversy is over a part of Chapter 6 of the book on page no. 113. The excerpt reads that -

"Classical Hinduism known to sages and saints were being pushed aside by a robust version of by all standards a political version similar to the jihadist Islam of groups like ISIS and Boko Haram of recent years."

Since ISIS and Boko Haram are terrorist organizations, this assertion is naturally questionable. Why has Khurshid drawn such a comparison? Any Hindu body, religious or political, bears no resemblance to such institutions. Maybe he thinks the legislative and the courts are mingling and isn't happy about it. With MLAs like Pragya Thakur, who was involved in the demolition of the Babri Masjid, and Kangana Ranaut receiving the Padma Shri despite saying that India only got independence in 2014, the thought is not outlandish. Even though Khurshid states his goal is Hindu-Muslim reconciliation, his approach appears to be befuddling since he lacks a clear justification for his assertions.

Disagreements and Other Issues

The Hindu Sena's president, Vishnu Gupta, has filed a lawsuit against Salman Khurshid, seeking an order to stop the publishing, sale, circulation, and distribution of Sunrise Over Ayodhya. They claim that parts from the book demonize Hinduism and intend to incite Hindu resentment. MLA Narottam Mishra has urged for a public boycott of the book in Madhya Pradesh, describing it as blasphemous and Khurshid as a "sleeper cell." This is not the author's first brush with controversy; his work "Satanic Verses" was banned in India by the Rajiv Gandhi administration. People are comparing this controversy to Bloomsbury's decision to remove the book "Delhi Riots 2020" because it has an anti-Muslim storyline. There is no religious prejudice in this boycott phenomenon, contrary to popular belief. With the assembly elections in Uttar Pradesh looming on the horizon, there is also a political angle to consider. "Sunrise Over Ayodhya" was sued because the disputed lines are a poor publicity act designed to polarise and garner votes from minorities. Even if this were true, the vandalism at Khurshid's Nainital home is a shocking indication of our waning tolerance. At his residence, authorities discovered seven empty rounds and a live cartridge. The legal way of the suit filed by Hindu Sena will be debating the exceptions of Article 19 and determining whether the excerpt falls into it. According to article 19, the constitution of India provides every citizen with the freedom of speech and expression. However, reasonable restrictions can be imposed on this right. Thus, the freedom of speech and expression is not absolute and can be restricted by a competent authority in the interests of the society.

The childish tendency to boycott and ban

There has been a shift from the earlier comfortable bond between people of different religions to a strange tight-lipped conversation now. This is accompanied by an odd demand to boycott or prohibit literary and artistic expression. The most heinous example was the Jashn-e-Riwaz issue, in which Fabindia was accused of defaming Diwali by using the Urdu language to allude to it. What would these folks think about Bhagat Singh's famous slogan, "Inquilab Zindabad," which he promoted for our independence struggle? Padmavat received outrage a few years ago, and actress Deepika Padukone was threatened. The reason cited was that Bhansali had portrayed Rajput culture in a bad light even before the movie was released. In a logical society, when everyone is capable of forming opinions and knowledge is just a click away, oversensitive censorship is unnecessary. It is past time for us to abandon this conduct and embrace a more open and tolerant society. "I may not agree with what you say, but I will protect your right to express it until death," Voltaire declared. Before we can remove objections, we must first identify and demarcate the obfuscated boundary between free expression and hate speech. Although Khurshid's understanding of Hinduism was skewed and prejudiced, banning the entire book sounds archaic.

What you seek is within you!

Following this controversy, most people know about the disputed lines of Khurshid's book, but less than a tenth of those would have read the book. Banning something is almost a sure-shot way of making it the talk of the town. Shutting off opinions in the form of pages may instigate people to channelize their radical ideas in another undesirable manner. With platforms like the darknet existing, it is practically impossible to close all doors of expression then why target books in particular. Even if successfully banning challenging perspectives blocks out a whole range of ideas and when people will be exposed to it in practice, it would be a shock. There is no compulsion to read a book as it is always the reader's choice. When we take away the options available for reading, we treat our citizens no less than mindless puppets. Consider “Mein Kampf”, for instance-it supports racism, misogyny, and what not but continues to be a bestseller. People read it to learn about Hitler's errors and the attraction of his ideas so that they don't fall into the same trap again. For the same reason, we must enable Sunrise Over Ayodhya to be sold, so that readers can examine the hollowness of some of its claims.

Total removal of censorship is not the way to go too. Aristotle's middle way might be applicable here. Restricting sexual and violent content is acceptable as it may incite unnatural acts. But political and religious censorship is not required in a democracy like India. No religion is so weak to detonate with one person's criticism, and if a political party cannot stand disparaging, it is doomed anyway. Challenging parts can be underlined, and a question or answer to that- can be quoted below. This can be done by the publishers or the writer himself. A logical discussion is always possible. The views expressed by Khurshid about Hindutva are debatable, but that does not undermine the fact that "Sunrise Over Ayodhya" is a considerable commentary over the SC judgment. The decision of whether to read a book or not is individual and should be left to the readers, not to the judiciary.