The Overturn of Roe V. Wade: The Effects 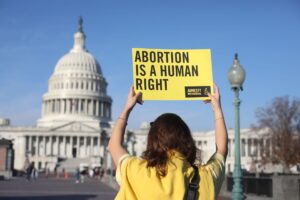 The overturn of Roe v. Wade happened more than a week ago, ending the right to an abortion upheld for nearly 50 years, and citizens of the United States went into flames. The U.S. Supreme Court officially reversed Roe v. Wade on June 24, 2022, leaving the world, including myself, in shock by this decision.

You would think in 2022 that this would never happen. Maybe 60 or 70 years ago, but not today, not through laws, amendments, technology, and social media. It’s crazy that this is happening. When announced, the news trended on the internet. Celebrities used their platform to speak about the issue and expressed their support for women, and there have been marches held to fight against the supreme court decision.

Each year, millions of women have unwanted pregnancies. The impact on these pregnancies will depend on a woman’s economic resources, availability of medical care, family relationships, and health. These and other factors will influence a woman's decision to keep or terminate the pregnancy. And that should only be made by the woman.

The ruling does not make abortion illegal nationwide but does mean that states can make their own rules on abortion, including banning the procedure or enacting restrictions. States like South Dakota, Missouri, Arkansas, and Idaho have eliminated abortion. Women will have to travel to different states to access a safe procedure instead of their hometown. For decades women have had the choice of deciding what to do with their bodies, and now women no longer have that option.

According to Nature, Catilin Meyers, an economist at Middlebury College in Vermont who has studied the financial impacts of abortion restriction, has solid scientific evidence that the decision will negatively affect women.

Myers has estimated that within a few months of the overturn of Roe, 54% of U.S. women seeking abortions will have to travel farther than they would have previously to reach their nearest abortion provider. For these women, travel distance will increase from about 58 kilometers (36 miles) to about 441 kilometers (274 miles) on average.

“Based on what we know about how women respond to travel distance, about three-quarters of them are still going to manage to get out and reach a provider, and about a quarter of them won’t,” Myers says. This quarter represents the poorest and most vulnerable people, she adds.

There is a chance most women won’t travel because they don’t want to, or they can't afford it. I hope women have some assistance when traveling to another state, whether from providers in their state or family and friends.

That’s another fear of mine as well, will women from other states have resources due to the huge outflow. Will women have to wait weeks or months to schedule an appointment? Will there be enough doctors? Who knows, but providers in every state must figure it out and prepare for the unknown.

When abortion was legalized women sought to end their abortions without clinical supervision. Since abortion is illegal in some states, there’s a high chance more women would self-manage it by taking abortion medication. Even though medication pills are safe and effective (proven to be), it would be difficult now to obtain pills due to states having trigger laws going into effect (or in effect) that will ban it and dealing with the legal risks.

More than half of all U.S. abortions in 2020 were medication abortions — up from 39% in 2017, according to the Guttmacher Institute, abortion-rights research, and advocacy organization.

The Food and Drug Administration approved the two-drug abortion medication regimen in 2000. The first pill, mifepristone, blocks progesterone, a hormone that supports pregnancy. The second drug, misoprostol, is taken as four pills 24 to 48 hours later to induce contractions. (It is also used to prevent stomach ulcers.)

Those seeking abortions despite bans in their states might travel to another state to get the pills where they are legal. Might use an address in another state and have the package forwarded; look for providers in other states willing to ship by mail under the table, relying on providers in other countries that mail pills to the U.S. or obtain the medications abroad.

Alina Salganicoff, director of women’s health policy at the Kaiser Family Foundation, said in an NBC news article, “We will have quite a range in terms of the quality of the mifepristone that’s going to be available outside of traditional clinical channels. People are really going to be, in many cases, left on their own to judge and potentially vulnerable to bad actors who may not be providing the medication that people seek."

Even before Friday's decision, many states had restrictions on medication abortions. In 19 states, when a woman takes the pills, laws require a clinician to be physically present. In 32 states, physicians must administer the pills, not nurse practitioners or physician assistants. Having a physician in the room or administering was way better and safer. Now it’s all up to the women. Some women might be willing to do anything to end their pregnancy, and some may not think clearly and carefully about where they are purchasing abortion pills, especially online. We won’t know until it all plays out in front of us.

The overturn of Roe Vs. Wade has reshaped American society and culture. The Supreme Court voted to overturn the landmark 1973 ruling in a 5-4 decision. The court’s conservative wing voted to overturn, and the liberal side voted to uphold. Supposedly, the conservative supermajority didn’t listen or agree with other court members. If the conservatives ban together, there’s no telling what they will do next. And that’s scary to think about.

Larry Lazor: Stance on Abortion as a Republican OBGYN