The End of “Finlandization” and the Flounder of Liberalism 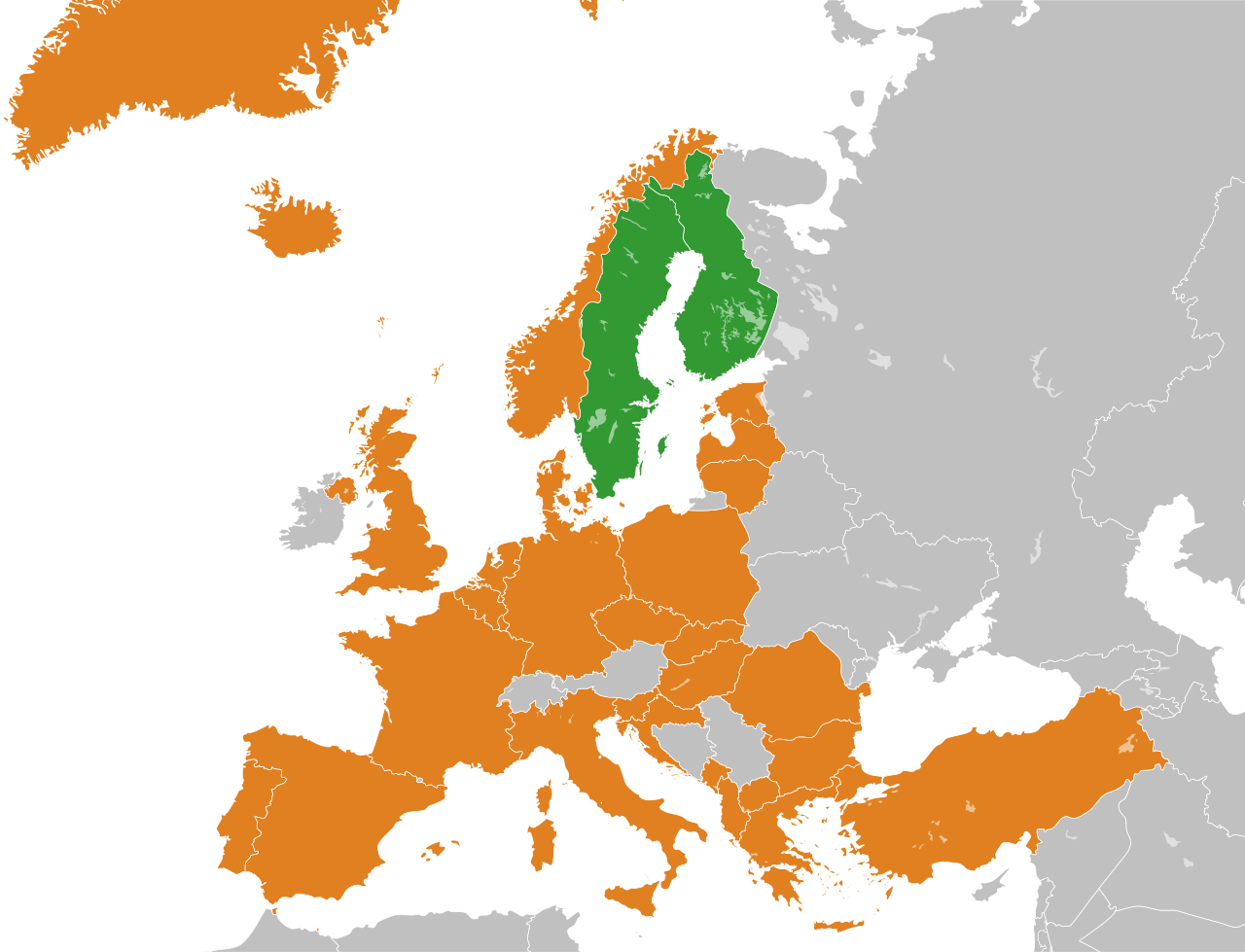 Sweden and Finland have made the histrocial decisions to apply for NATO membership. What pushes them to make such a decision? What could it mean for the future diplomats and International Relations scholars?

While the warfare in Ukraine is still ongoing, Finland and Sweden, two long-neutral Scandinavian countries, have launched the process of joining NATO in parallel, which offers more variants for the security order in Europe.

On the contrary, in January, when the entire Europe was concerning Russian troops’ consecutive “drills” at its border with Ukraine, the Finnish and Swedish authorities were wary of expressing any official desire about joining NATO, despite the voices of joining NATO having arisen among their people. In other words, for the Finnish and Swedish leadership, joining NATO was an assumption but not an actual decision that was driven by the public opinions in their territories.

Nonetheless, the situation changes quickly. For example, in Finland, a poll commenced on February 23 by Yleisradio Oy (Finnish Broadcasting Company), one day before Russia’s “Special Military Operation,” shows that out of 1,382 adults, 53% said Finland should join the defense alliance, 28% said no, and 19% were indecisive. The supporting rates for NATO membership rose slightly to 57% in a poll conducted by Aftonbladet in April, the largest circulation Swedish newspaper. In May, this number soared to 76 % in another poll conducted by Yleisradio Oy.

With the public opinions in their territories have shifted, the two governments pick up the pace of joining NATO. On May 15, 2022, local time, the Finnish president Sauli Niinistö and Prime Minister Sanna Marin announced that Finland will officially apply for NATO membership in a joint press conference. Almost on the same day, Sweden decided to end its over-200-years of military neutrality and join NATO.

The plan of accessing NATO had previously received overwhelming support from MPs in both countries' parliamentary debates. Both the ruling party and the main opposition party in the Swedish parliament supported the plan, with only the Left Party (Vänsterpartiet) and the Green Party, both of which were born out of the former Swedish Communist Party, opposing NATO membership by a total of 44 out of 349 MPs.

Despite the two governments’ historical decisions and the relatively smooth decision-making process in the two countries’ parliaments, the way to join NATO is still winding down. For all the warm welcome by Secretary John Stoltenberg, a consensus needs a long time to form inside NATO. For example, important NATO member Turkey has confirmed its opposition to Finland and Sweden joining NATO. The Turkish president Erdogan alleged that the two countries are supporting Kurdistan Workers' Party (PKK) in the Turkish territory, a “terrorist group” defined by the Turkish government, and Gülen Movement, a major political clout opposing Erdogan. “Neither of these countries have a clear, open attitude towards terrorist organizations. How can we trust them?” said Erdogan in a press conference.

In addition to the dissidents from NATO members, some Finnish and Swedish are disappointed with their governments’ decisions. About half of those interviewed in a street interview by Helsinki Sanomat (Helsinki Daily) in Eskilstuna, a satellite city near Stockholm, believed the decision-making process was too rapid and that a referendum should be held first before making such a historical decision.

No matter what, Pandora’s Box has been opened, and “Finlandization” has come to an end. Europe and the world urgently need a new order that can be accepted by Russia, the West, and others. However, it doesn’t mean that studying “Finlandization” is no longer necessary because new things are always born out of the old.

While the former Soviet Union and the Russian Federal perceive "Finlandization" as an exemplar for dealing with neighboring minor nations, "Finlandization" is a slightly disparaging term in the Western context, referring to a method of trading one country's partial sovereignty for peace and stability.

“(Finlandization) meant, very briefly, appeasement by Finland of its powerful neighbor to the extent that the country could no longer be defined as neutral and independent in the traditional sense. There was no Soviet censorship in Finland, but there was Finnish self-censorship, driven by fear and anxiety, and a great readiness to acquiesce in Soviet wishes was very much in evidence.”

He further criticized Urho Kekkonen, the Finish president who utilized the Soviet’s support to stabilize the Finnish society during a crisis that “it was not the policy of wisdom, maturity, and responsibility that Kekkonen and his supporters claimed, and furthermore it set a bad example for the rest of Europe.”

It is true that “Finlandization” is originally based on Finland’s fear of the formidable Soviet Union. Although the Soviet Union paid a high price to win the Finland-Soviet War in 1940, the Finnish sacrificed even more. Hundreds of thousands died, and a piece of land was ceased to Joseph Stalin.

When Adolf Hitler was beating the Soviet Union in today’s Belarus and Ukraine, Finland chose to collaborate with him to take back the ceased land. However, when the Red Army was fighting back Nazi Germany crushingly in 1944, Finland realized its neighbor was much more powerful than before. Hence, the Finnish government quietly broke up with Nazi Germany and signed a bilateral peace agreement with the Soviet Union.

As “the Iron Curtain” came down slowly in 1947, Finnish elites were so terrified to see how Poland, Czechoslovakia, and other East European countries were absorbed by Moscow so easily. When Joseph Stalin wrote a letter to the Finnish president to suggest an economic collaboration between the two countries in 1948, it was considered a prelude to the Soviet’s military conquers.

It was a great fortune for the Finnish that Stalin seemed to have no intention to do that. In 1948, the Soviet-Finland Agreement was signed, indicating the beginning of “Finlandization.” Since then, Finland had not been inflicted with any military threat from either the West or the East Bloc. Nevertheless, the price is the West Bloc continuously criticized Finland for being too weak and the East Bloc intervened in Finland’s affairs brassily.

There is no doubt that Finland’s sovereignty has been partially sacrificed by the “Finlandization” policy.  However, this is still the best choice for Finland in that specific period. For all the critiques from the West Bloc, nobody has ever called Finland a vassal state of the Soviet Union as they do to those East European countries. In other words, Finland is still Finland, though being profoundly influenced by the Soviet Union.

The fundamental reason for “Finlandization” being controversial is that a country’s sovereignty is usually unquantifiable. Hence, it is almost impossible for a country to calculate “how much sovereignty” have been earned or lost. Also, no country can be immune from external political clouts, even the United States and the Soviet Union. When these two superpowers make some recessions in foreign policy under the pressure from the other or other countries can that be counted as a form of losing sovereignty?

With that  said, the embodiments of sovereignty have different priorities. At any time, citizens’ well-being, the wholeness of territory, and its absolute control are always the top priorities. The Soviet Union boldly intervened in Finland's foreign policy, but not in return for Finland's territory or the well-being of the Finnish people. No foreign military has ever tried to station in Finland, and no Finnish dies from any armed conflicts. Finland is able to communicate with both the West and East. In this sense, the “Finlandization” policy is actually a “sacrifice-small-to-ensure-large” way to practice sovereignty.

Nonetheless, this article has no intention to justify the Soviet Union or the “Finlandization” policy. As aforementioned, “Finlandization” is essentially an abnormal foreign policy based on people’s fear of hegemony. Therefore, whereas the discussion about “Finlandizing” Ukraine exists even before the war outbreak, this should be proposed, and should always be the last choice.

The Flounder of Liberalism

Although the history of Finland has been well discussed in the previous text, “Finlandization” does not only happen in Finland but also in countries like Sweden and the Mongolia Republic. But specifically for Sweden and Finland, the logic of “Finlandization” is that since the major war in Europe will be between the Soviet Union/Russian Federal and NATO, not joining any military group can keep small countries out of war.

The Russia-Ukraine War breaks this assumption. Since the beginning of the war, NATO has clarified that it will offer strong support to Ukraine, but not any single NATO combatant will be on the Ukraine battlefield. NATO has steadfastly fulfilled the two commitments, which quagmires Ukraine into a war of attrition. No matter how international media tout Ukrainians’ valiance and Russians’ impotence, an uncomfortable fact remains that the battlefield has never left Ukraine. It is Ukrainians’ infrastructure that is being destroyed but not Russians’.

This is definitely not the situation that Sweden and Finland want if a war between them and Russia happens one day. If there is no middle way between “NATO membership” and “no substantial support from NATO when a war happens,” Ukraine had acquired the promises from the world’s great powers when it divorced from the former Soviet Union. But the reality proves that diplomats’ promises are less useful than the promise of collective security.

In a deeper sense, the founder of diplomats’ promises means the failure of liberalism. United Nations Charter, the Budapest Memorandum, and many other international institutes are not able to unite and regulate countries but military bloc can; Promises, deeds, and values cannot bring countries together or control them, but muscle and fist can