The Problem of Drainage During Monsoons in West Delhi 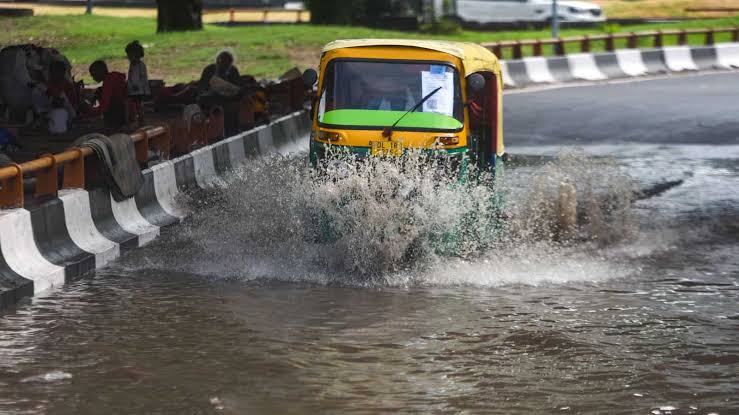 For the people of Delhi, summer brings with its scorching heat and constant despair along it. It is this killing heat that makes them pray for rain, as has been a practice in India for centuries. However, when these prayers are answered, it’s not always pleasant. Though there’s respite in the showers of June, by the time the rain increases, Delhi’s streets and major roads are blocked, bringing life to a standstill.

Delhi receives rainfall from the Arabian Sea branch of the Southwest monsoons and there are three major drainage basins in the city: Trans Yamuna, Barapullah, and Najafgarh.  West Delhi is drained by the Najafgarh basin. All of these basins have a wrong slope and hence, the water from the rainfall does not flow into the main sewage drains on its own. Instead, it has to be pumped back.

According to the “PWD Food Control Order, 2019”, the status of many pumps in areas prone to major waterlogging has been declared to be defective and out of order. This is the major reason that it takes less than 60 minutes of rainfall for the western part of the city to be submerged in water and unmoving traffic.

The last Drainage Master Plan for Delhi was made in 1976 and since then a multitude of changes have been brought about that have made the plan irrelevant and the drainage system, archaic. There are new roads that have spruced up which weren’t taken into consideration at the time this plan was made. The Transport Planning Department, School of Planning and Architecture has said that the increase in concrete pavement and roads reduces the absorption capacity to 2%. Hence, 98% of the water that falls on the paved area has to go through drains.

If these drains are not managed properly, runoff cannot happen smoothly, leading the rainfall coming to a natural slope to get collected which forms a condition called the “ponding situation”. Efforts have been made to bring uniformity in discharge rate and arrival rate but the concrete roads that have been made cannot be demolished and any sustainable effort to avoid this situation has not borne fruits.

Unplanned urbanization in the city, specifically the densely populated West Delhi, has led to an aggravation of this problem. According to the Census of 2011, west Delhi is the most populated area in the city, with the encroachment of drains by the building of houses, parking, and pavements being extremely common.

In 2012, the Department of Irrigation and Flood Control gave the task of creating a new master plan to IIT Delhi. The final plan was ready and presented by 2018, however, no substantial steps have been taken thus far. In addition to this, there has been negligence towards the inadequacy of sewage drains in the city. Sewage flows into water drains, clogging them and leading to siltation of the drains.

In the Najafgarh Drainage basin, which drains West Delhi, the PWD Report claims that 111.46% of silt has been removed but the reality depicts something else. In a conversation with one of the students living in Karolbagh, it came to notice that she had to take a rickshaw to reach her coaching center in the monsoons. The distance between her PG and the coaching was less than 300 meters but due to waterlogging, she was unable to walk. Even on the rickshaw, she was saved from falling multiple times due to potholes and uncertainty as the roads were not visible due to excess water.

These personal testimonies bring out the everyday difficulties that are faced by people. The roads become extremely slippery sometimes, leading to accidents and even fatalities. It takes a few days for the logged water to be removed or evaporated and in the meantime it breeds diseases. Diseases like malaria and dengue are rampant in Delhi and the collected water becomes a breeding ground for mosquitoes causing them.

For the past two years, the blame for mismanagement has been put on COVID-19, giving the reason that the government is utilizing all its resources to combat the pandemic. The point that arises is that when there was no pandemic, what were the subsequent governments doing? However, it isn’t the government who is at fault alone, it is the people living in the city who have encroached on urban landscapes for their houses, shops, and other things of their choice. When people make such choices, without considering the aftermath and things that could lead to grave problems, it is they who have to bear these consequences and this needs to be reminded to them.

More often, it doesn’t affect people who are a part of this unplanned urbanization but those who do not have concrete homes over their heads. It is the people living on footpaths or plastic sheds who bear the greatest consequences. Their belongings might just flow away in the drain or the little food that they might have becomes molded and inconsumable. In a graver situation, it might lead to the loss of life due to contaminated water, causing diarrheic diseases.

In Block 9 of South Patelnagar, there are a couple of families that live in tattered slums right next to a garbage dump. Due to inadequacy in the removal of garbage on time, every time it rains, the garbage flows with water on the road and into their settlement. It isn’t a pleasant sight, to witness garbage floating on streets and a rather painful reality comes before us when we see the families struggle.

On 13th July 2021, Delhi’s PWD Minister, Satyendra Jain directed officials to ensure that no waterlogging takes place on streets during the rainy season. He mentioned that PWD has made elaborate arrangements to deal with this recurring problem. He said, “Water should be removed from roads within 10-15 minutes. We have installed 1500 pumps at vulnerable locations to ooze out water.” Claims have been made yet again, but it remains to be seen what the rains bring this year to the streets of West Delhi.