The Save Soil Campaign 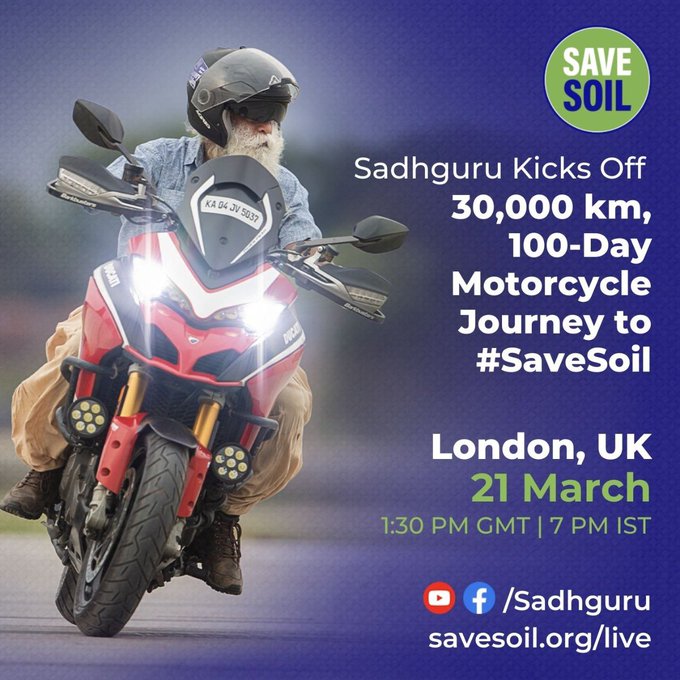 ‘Be a part of the conscious planet team and save soil. Let us make it happen’.

As humanity struggles against climate change, conflict and unprecedented societal changes, the world’s leading climate, and environmental scientists collaborated with Sadhguru to highlight an ever more significant threat, which can be transformed into a tremendous opportunity, if we can act within the next few years.

Based on interviews with award-winning scientists, we can see how soil around the world is going extinct. This is leading to global food and water supply shortages, which will impact not just the poorest but even the richest nations. Save Soil, a global movement envisioned by Sadhguru seeks to bring about a concentrated, conscious response to impending soil extinction.

The mission of Save Soil is a global movement to invoke a conscious approach to soil and the planet in all. One of the main objectives of the movement is to show governments across the world that their citizens want policies that revitalize ecology and soil. Isha Outreach will partner with the Save Soil movement to facilitate its execution in India. Already thousands of eminent figures and even heads of state are coming together with this common goal to restore soil health and rekindle our bond with mother earth.

To demonstrate the support of over 3.5 billion people, Sadhguru started the journey of over 30,000km across 27 nations on a lone motorcycle. The journey started in London and will end in the Cauvery basin in southern India where the Cauvery calling project, initiated by Sadhguru, has so far enabled 125 thousand farmers to plant 62 million trees to revive and help replenish the depleting waters of the river Cauvery.

This approach will make citizens participate in large numbers, it will lead to ecological issues becoming election issues, which will in turn ensure that governments adopt policies and set budgets for sustained implementation of ecological solutions.

UNCCD (United Nations Convention to Combat Decertification) is the sole legally binding international agreement linking environment and development to sustainable land management. UNCCD is the key partner of the Save Soil movement, collaborating in multiple aspects, including scientific knowledge, communication, and outreach

Yogi, mystic, and visionary, Sadhguru is a man whose passion spills into everything he encounters. Sadhguru’s work has touched the lives of millions worldwide through his transformational programs, naming him one of India’s 50 most influential people.

He has initiated large-scale global initiatives, including the UNCCD accredited Isha Foundation, with 11 million volunteers in 300 centers worldwide.

In 2017, Sadhguru also launched Rally for Rivers, a campaign to raise awareness about the dire state of India’s rivers, which was supported by 162 million people, making it the largest ever ecological initiative of its kind. Rally for Rivers was featured at the 2019 UN Climate Action Summit in New York.

Eminent figures like His holiness Dalai Lama and institutions such as the United Nations, World Economic Forum, and World Food Program of United Nations have come in support of Sadhguru’s vision.

How soil degradation impacts our lives

A study of nutrients in food concluded that you would have to eat 8 oranges to have the same amount of vitamin A as our grandparents did with one orange. Soil depletion has caused massive drops in nutrition levels in food, causing 2 billion to suffer from nutritional deficiencies (WHO). The average mineral content of calcium, magnesium and iron in cabbage, lettuce, tomatoes, and spinach has dropped 80 – 90% from 1914 till today. The global economy will lose 23 trillion dollars by 2050 through land degradation (UNCCD).

Save Soil movement aims to increase organic matter in the soil to a minimum of 3%. To affect this change, we need to advocate policies across all nations toward soil restoration and raise awareness of this imminent crisis among all people to garner support for these policies.

You as an earth buddy should spare 10 minutes a day to create awareness in your circle about the condition of the soil. You can do this simply by talking to people around you about soil, sharing a video or a message or posting on social media, and amplifying the various facts and content published by Isha Foundation.

Soil conservation is the prevention of loss of the topmost layer of the soil from erosion or prevention of reduced fertility caused by over usage, acidification, sanitation, or other chemical soil contamination. We can improve soil erosion by crop rotation, cover crops, conservation of tillage, and planted windbreaks.

Soil is dying; 52% of agricultural soils are already degraded, 2 billion people are suffering from nutritional deficiencies and farmers are committing suicide. By 2045 we will have 40% less food for 9.2 billion people which may lead to mass migration, violence, and civil wars. Unless we act now to save soil, we won’t be able to save the earth from catastrophic disasters that could arise.