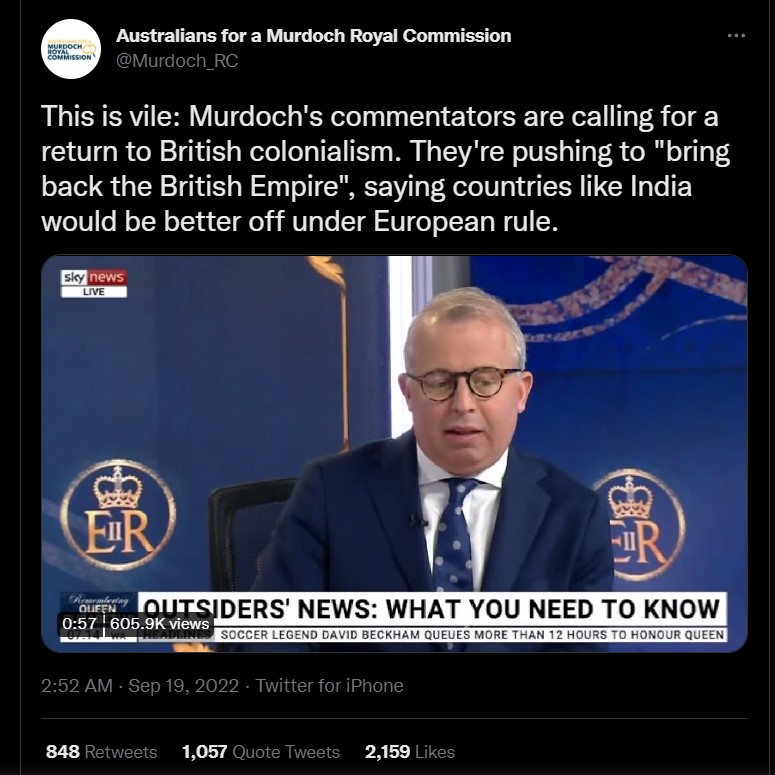 With the death of Queen Elizabeth II, it looks like the colonial apologists are back and in full force. The news has been full of mourning for the late monarch, and there’s nothing wrong with that. Despite whatever else may have happened under her reign, like the brutal suppression of Kenya’s Mau Mau rebellion, the Malayan Emergency, the war in Yemen, or even Bloody Sunday, she did try her level best to stay out of any big scandals in the public limelight. At the very least, she was quite dignified, and her behaviour did not reflect the atrocious racism perpetuated by the British Empire.

But we still must talk about the fact that her passing seems to have allowed colonial apologists to come out in public, in full force, defending the “glory” of not just the British Empire but in general. Anchors Tucker Carlson waxing poetic over the “greatest” monument in India, which is the now renamed Chhatrapati Shivaji Terminus (earlier called the Victoria Terminus) which was a railway station built by the British so they could transfer their loot across the country. We’ve got anchors on the reputed channel Sky News claiming decolonization was worse and how they gave “civilisation” to the “masses,” pointing out the situation of countries in Africa and the Indian Subcontinent and claiming that decolonisation was bad for them. The anchors in question are James Morrow, a political editor for the Daily Telegraph, and Rowan Dean, who is a columnist with the Financial Review.

I think one point should be obvious and bears mentioning, free speech is an individual, inalienable right of every person. Here’s the rub, though, freedom is a two-way street. You’re free to speak or act as you want, and someone else is free to mete out the consequent reaction to your freedom. There are no two ways about it. Unless someone is being particularly vile or hate-filled, every point of view is worth looking at, and no one should be forced to accept something; they should be convinced. It is widely accepted that colonialism, and the subsequent slavery that followed, was a horrible blot on the history of the world that forever changed the world’s course. And so, I don’t believe de-platforming these people is the solution. That would only make the supporters of these regressive ideas cling to their points of view more firmly. Instead, I think it would be better to engage these people publicly and have people from one of the many countries which have suffered counter these people on their platforms. Only ideas can counter other ideas, and if the champions of liberalism start engaging in tactics the other side has employed, we would be no different.

I want to point out something that’s common knowledge. Economic inequality brought by generations of exploitation does not vanish overnight. Especially not when it was backed by systemic racism as well. If that were the case, then the Indigenous peoples of Australia would be better represented in political circles, Canada’s first nation peoples would not be amongst the poorest, and the US’s Native Americans and African Americans would not be at the bottom of the food chain. When economic inequity is so visible in individual countries, isn’t the same true of the world at large? The post-colonial world has been mostly- dare I say it- west-centric since World War 2. Concurrently, people in developed nations are undergoing racial crises of their own, caught between extremes on both the left and right, in between post-colonial thought and colonial hangovers.

So, when popular social media handles of people of colour came out to speak about the atrocities of the Empire, they were silenced and called disrespectful and irreverent, and that this was not the right time to bring it up. Well, who are they to decide that? What right does anyone have to tell the people of Africa that they’re not allowed to talk about what colonialism did to them? I don’t include India here because, despite the ups and downs, India has climbed out of that hole to become the world’s fifth-largest economy. But what about Libya? Uganda? Sudan? So many more. The African continent has been ravaged, and the vestiges of the colonial legacy extend to their descendants, especially in North America. Intergenerational trauma exists visibly across the board.

The very fact that power and wealth are concentrated in the hands of a few, and those few happen to be legacies that benefited from colonialism and belong to countries that participated in the process of colonialism is not a coincidence. Look at the power structure in the world. The topmost powerful countries hold the UN seats, all of which – excluding China- must contend for the past atrocities and, in Russia's case, atrocities right now. There needs to be greater social awareness, and schools in developed countries must stop whitewashing their historical mistakes.

The recently unelected PM of the UK, Liz Truss, has gone on record both last year and recently, saying that Britain needs to “stop guilt over its colonial past. I strongly disagree. We expect criminals to harbour guilt for their crimes so that they may learn from it. Why not do so with countries that were instrumental in holding up a system of discrimination that ended up having a far-reaching impact on the present and may continue to do so in the future? If race must stop becoming an issue, then we need to take steps to change the way we address it. I think it’s telling that once Liz Truss stepped down and Rishi Sunak took over, the overwhelming vitriol against his cultural roots doubled.

Let’s start with changing the language we use to discuss this. The language we use to discuss these issues must change. The way we talk about these topics must change. We must let those impacted by these issues speak freely and understand their anger and hurt. Journals routinely refer to African countries as ex-colonies or former colonies, as if they have no identity of their own beyond that of conquered and discarded nations. How can we talk about equity and equal standing when there is a clear and distinct difference in how “global” journals discuss issues about their home base and issues outside? The concept of tokenism must also end; we need intellectual diversity, not just visible diversity that parrots the same pre-approved talking points. There is no one right way or right thought for everyone to adopt which can be exclusively championed, which happens quite frequently. Without the acceptance that everyone is an individual with differing opinions, we will never achieve reconciliation.

There needs to be more education and awareness. That is the only way to counter this kind of thought. Schools across the world must teach a version of history approved by the colonised, not the colonisers, to which the majority of contributions have been made by native scholars, not just scholars of the west. Having a British or American, or even French historian write exclusively about history means there’s an analysis of the past only through the lens of colonialism and prejudice. Even history is not free of its biases; as the famous saying goes, “History is written by the victors,” though I am more partial to, “Unless the lion learns to write, every story will glorify the hunter.” When countries that were victims of colonisation come forward, the first thing that happens is either they are denied their reality or told they’re exaggerating. The statement, “It wasn’t THAT bad,” is frequently thrown around. It was precisely that terrible. Just because the past is horrific to look at does not make it untrue. These things need to be taught so that people realise the impact of the past and so that they learn from it. Internalised racism exists to this date, even among those who think they are progressive. It manifests in everything from insisting someone change their personality or communication style to implying that integrating into society requires them to shed all their cultural roots to be assimilated.

We must also accept that when there is talk of reparations, it has less to do with money and more to do with acceptance. You cannot have two extremes; one glorifying the atrocities of the past and claiming those acts were somehow meant to civilise an uncivilised world, where the implication is that non-white peoples were uncivilised before the white man civilised them. The other extreme where white people crucifying themselves and others, forcing themselves into absurd positions of submissiveness as compensation. Neither of those works, as is evident now. We need to find a middle ground, which is precisely what reconciliation is about. Reconciliation is the middle ground where the past and the present meet so we can all move forward together toward a better future.