The US Hegemony in the 21st century- What is it with America's love of meddling in other people's affairs? 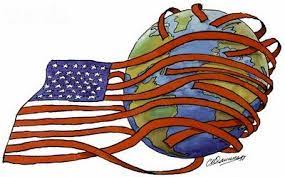 US Ambassador, at large for international religious freedom, Rashad Hussain recently tweeted about the Hijab row in India. His parents are immigrants from Bihar and are the first Muslim to hold the post in the US. According to the White House statement, he “spearheaded efforts to counter antisemitism and protecting religious minorities in Muslim majority countries.” Confirming the American habit of interfering where their opinion is neither required nor relevant, he took up the Hijab controversy. “Religious freedom includes the ability to choose one’s religious attire. The Indian state of Karnataka should not determine permissibility for religious clothing. Hijab bans in schools violate religious freedom and stigmatise and marginalise women and girls.”, he tweeted.

India reacted forcefully to the remarks on the escalating issue by foreign countries saying that their comments did not consider India’s “constitutional framework and mechanisms, as well as our democratic ethos and polity, (which) are the context in which issues are considered and resolved.” Criticism of the development in Karnataka also came from Muslim Civil Rights and advocacy group council on American Islamic relations (CAIR) which said that the Hijab ban is “just one more example of the mistreatment of Indian Muslims and the Islamophobic actions that nation’s government wither carries out, ignores or excuses.” The world is well aware of the prevailing Islamophobia and discrimination against Muslims in the US, so if these statements aren’t ‘pot calling the kettle black’, then I don’t know what the idiom means.

Can the US (legally) do Anything?

The UN Charter guarantees non-interference in internal matters of the state as it falls under domestic jurisdiction. But as times changed, the possibility of a direct war between countries was negated and the UN felt the need to regulate other things, disrupting peace. In 1999, the general secretary Kofi Annan declared that the global community could not stand idly by, watching gross and systematic violations of human rights and that state sovereignty was being redefined to encompass the idea of individual sovereignty. While many countries seemed reluctant, the UN agreed on a responsibility to protect populations from mass crimes. This agreement is the basis of American justification of its invasive actions around the world. The definition of Sovereign Rights is also vague as its interpretation is done on the western line of thought. The ramifications of the so-called humanitarian interventions are more often than not disastrous.

America was the first to introduce a code like the Monroe doctrine which said that ‘America is for the Americans.’ It was a landmark step in resisting European colonialism in the Western hemisphere, but the US does not believe in a similar right for other countries. After the collapse of the Soviet Union, Uncle Sam emerged as the sole superpower and after that, the trend has only increased. US mainly meddle in MENA (Middle Eastern and North African) countries, but has occasionally targeted other countries too, like Afghanistan and Vietnam. The main economic reason is crude oil and also the strategic location of countries like Afghanistan and Vietnam against the Kremlin. It does this under the flimsy disguise of promoting democracy in the world.

The US government generally promotes democracy by funding international organisations that strengthen democratic transition, but they are not opposed to putting diplomatic and military pressure. History has documented the disgraceful record of the US in interfering with the internal issues of countries. Jimmy Carter once referred to the US as “the most warlike nation in the history of the world” because of its forceful way of compelling countries to adopt American principles. The country is the main culprit threatening global political security, as it has frequently meddled in and subverted other countries regimes. The US also openly accepts these measures as tools of foreign policy, disregarding the great misery and suffering of residents of the other countries, be it Syria, Afghanistan, Libya or Iraq.

Now when there is no country in audible distress, the US is barking over Russia for the Ukraine issue and, if one thing wasn’t enough, talking about the Hijab issue, which is strictly domestic in nature. Any move that undermines global stability may bite back the US too and, in that case, bullying and manipulation won’t save the melting pot’s glory from melting away.