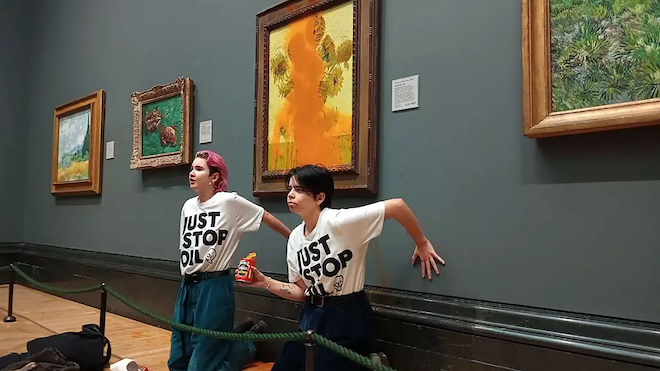 An act of protest

Last Friday, two climate activists threw two cans of tomato soup at Vincent van Gogh’s ‘Sunflowers’ at the National Gallery in London. The incident was captured on video and went viral. The pair were part of Just Stop Oil, a group that aims to end the British government’s new fossil fuel production in the United Kingdom. As museum guests watched, the activists glued their hands to the wall beneath the painting, now dripping in soup. One of the activists asked, “Are you more concerned about the protection of a painting or the protection of our planet and people?”

Naturally, their stunt struck a chord with viewers online. Social media users worldwide voiced concern about the painting. According to AP News, the soup did not harm the oil painting as a protective glass covered it. However, the frame was damaged.

The incident is part of a long string of climate activists defacing paintings as a publicity stunt to get more attention regarding the climate crisis. Back in July, two climate activists from Just Stop Oil also glued themselves to the wall underneath John Constable’s ‘The Hay Win’ at the National Gallery. Meanwhile, other members were glued to Leonardo da Vinci’s ‘Last Supper’ at the Royal Academy.

Even one of the most famous paintings in the world, the Mona Lisa, was a target. In May, a man disguised as an elderly woman in a wheelchair threw cake at the painting in the Louvre. The Mona Lisa was covered by protective glass. The man told onlookers, “There are people destroying the Earth. Think about it. Artists tell you: think of the Earth. That’s why I did this.” He was later detained in a psychiatric unit in Paris.

The Man behind “the Sunflowers”

I graduated from an art school, and so I wondered why the activists specifically targeted van Gogh last Friday. After all, van Gogh loved nature and often used it as his inspiration or subject when painting. “If I felt no love for nature and my work, then I would be unhappy,” he wrote to his brother, Theo, in 1882. His unbridled passion for his environment is evident through the colours he used and the vibrancy of his textures.

In fact, “Sunflowers” has nothing to do with climate change. (A few people online wondered if the painting was targeted because it was an “oil” painting.) According to Mel Carrington, a spokesperson for the Just Stop Oil cause, it is simply a famous painting with an iconic painter and would therefore grab headlines. “The purpose was to generate publicity and create a debate around the climate crisis and the actions needed to stop it,” said the Times. Carrington added that the can of soup was the more symbolic message. “The government should be helping ordinary people deal with ‘the cost of living crisis,’ rather than fuel extraction,” she said.

Act of publicity or cause?

While I empathise with and advocate for the urgency of climate solutions, throwing tomato soup at the painting, it makes the activism look bad for being both under-researched and a meagre publicity stunt. This goes beyond the idea that ‘Sunflowers’ is a cultural object that needs to be saved instead of the environment.

According to Dana Fisher, a professor of sociology at the University of Maryland, research shows that publicity stunt tactics don’t work. Instead of feeling sympathetic, the viewer might be turned off from the cause “for some time, if not permanently,” she said. If anything, sunflowers got more attention online than fossil fuels.

If research had been thoroughly done, it would have been evident that van Gogh was the wrong artist to target. Yes, he is a famous painter, but when he was alive, he made no money from his paintings. He was an impoverished man who was also socially exiled by his community because of his mental illness. He ended up in a mental hospital in Saint-Rémy-de Provence in the south of France. Unable to cope with his depression and uncertainty about his future, he shot himself in the middle of a wheatfield in July 1890.

Nature was not only an inspiration to van Gogh but a comfort to him. He preferred to work outdoors as he saw nature and art “inseparably linked,” as the van Gogh Museum in Amsterdam aptly described. Van Gogh believed that to paint nature, one needed to work in the middle of nature to get to know and understand it truly. “In all of nature, in trees, for instance, I see expression and a soul, as it were,” he once said.

While he was institutionalised in Saint-Rémy, he found solace in painting, creating about 150 artworks during that period, most of which were paintings of nature and his environment. It was evident nature gave him peace during his turmoil. “It seems to me that nature sees to it that illness is a means of getting us back on our feet, of healing us, rather than an absolute evil,” he wrote.

Given how passionate van Gogh was about the earth, I wouldn’t be surprised if he became an environmentalist and climate change activist in the 21st century.

His story of overcoming his pain through painting resonates with many people– and made for a heart-breaking Doctor Who episode. (In fact, I was relieved to see I wasn’t alone in feeling my heart break as I watched the tomato soup drip down the Sunflowers. A tweet reposted the incident with the threat, “I want to put [the activists] in a room and make them watch the van Gogh Doctor Who episode until their eyes fall off from crying.”

To answer the activist’s earlier question, “Are the viewers more concerned about the protection of a painting or the protection of our planet and people?” it’s okay to be concerned about both. But there’s a better, more impactful way of showing it rather than throwing a can of soup. Maybe the answer also lies in the Vincent and the Doctor episode.

In the episode, the Doctor and Amy take van Gogh to the Musée d’Orsay in Paris to show him how much his work is adored and loved. The museum creator moves Vincent to tears when he describes why the painter is the finest of them all:

“He transformed the pain of his tormented life into ecstatic beauty,” he explained. “Pain is easy to portray but to use your passion and pain to portray the ecstasy and joy and magnificence of our world; no one had ever done before. Perhaps no one ever will again.”

Perhaps when facing the turmoil of climate change, we can look to van Gogh for inspiration. Nature can be used as solace. Instead of using your pain to make others feel pain, use it to inspire (not aggravate) them about the beauty and possibility of the world.

What do you think of the soup act? Tell us in the comments below.