What makes AAP and BJP stand out? 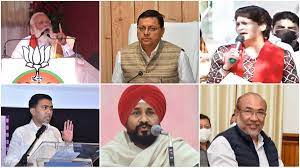 With the BJP retaining five out of four states which went to the polls, it must be heaving a sigh of relief, given that they were not doing well in the assembly elections since 2019.

The party managed to form a government in Haryana as well Bihar with an alliance. In Maharashtra, they could not form a government. They also lost in Jharkhand, couldn’t make it indoors in Tamil Nadu and Kerala, and couldn’t meet expectations in West Bengal. In that backdrop, retaining these four states is a big relief for the BJP, considering there are concerns about the economy and the ongoing Covid-19 pandemic.

One of the biggest takeaways comes from the state of UP. The BJP has managed to create a social coalition of upper caste and non-dominant lower caste. This is now a formidable coalition, which was created between 2014 and 2019. And it is very difficult for any party to defeat the BJP.

Wherever the BJP won, they managed to get a larger portion of women’s votes. This is new as earlier BJP did not fare well among them. All of this is happening because the BJP has managed to penetrate into Indian society and make cultural connections with people. Of course , it has charismatic leaders like PM Narendra Modi and UP CM Yogi Adityanath, has more resources and better organisation compared to other parties, but it can now also mobilise on the plan of welfarism, which is delivering certain benefits to people, especially targeted at poor and lower caste women. All of this is changing the BJP’s social base.

The exit poll suggested that there are things that the BJP should be worried about. The party has won, but it does not mean that everything is right. There are concerns around the economy and unemployment, that young people (students) are less likely to vote for the BJP.

To think of a reason and to say that Hindutva solely catapulted the BJP to victory would be a wrong assumption to make. Hindutva or mobilisation on religious lines is part of the BJP’s ideological platform. They mobilise on this issue in every election, whether they win or lose. But that alone did not bring victory to the party in four states, leave alone UP. It is a combination of many factors, including welfare benefits, leadership factors and organisational resources. All of this is very well tied together to present gf much more comprehensive message that the BJP can put towards the voters.

The AAP won a convincing mandate in Punjab and entered a new state where a game was going on among three-four parties to occupy the second spot. With the party now moving in a state where Congress was the ruling party, what we might see going forward is that the AAP will try moving to other states like Gujarat and Himachal Pradesh.

The AAP was present as a viable alternative since 2014 in the state. Once normal political competition was restored in Punjab after a decade-long insurgency in 1997, both the Congress and the Akali Dal got ten years of rule. The structure of competition is also important, which shaped this kind of victory for the AAP.

The Shiromani Akali Dal (SAD) in its ten years of rule had an image problem-a party associated with corruption, drug racket, collusion at all levels. The farm laws also stirred the pot, which led to the breaking of two very close allies-the SAD and the BJP. Capt. Amarinder Singh, the face of the Congress party for four and a half years, was removed from the party because they saw an anti-incumbency against him. Captain moved away from the Congress party and formed a coalition with the BJP.

So, the AAP was present as a viable alternative, and that’s what led to the idea of ‘people needed change’. In the 2017 assembly elections, the AAP was gaining traction and the above-mentioned factors created a more ripe environment for them to succeed. There is some resonance with their perceived model of governance in many parts of the country, and it will shake up the existing patterns of competition, but can the party become a success story in other states- as it has been in Punjab-that we need to watch out for.

The Congress has not been able to withstand electoral challenges for the last eight years. The party has been in a perpetual state of decline.

One could point out the crises that got precipitated in Punjab, where Congress leader of Uttarakhand, Harish Rawat, was busy dousing the fire in Punjab, so he didn’t get enough time to campaign. One could point out more such problems, but Congress is going through a much deeper structural crisis for the last decade or so. It does not have a clear platform or vision, with organisational weakness. These challenges cannot be solved in a moment.

Since 2019, they have not won anything. Now, they lost all elections, when they had a good chance in four states.