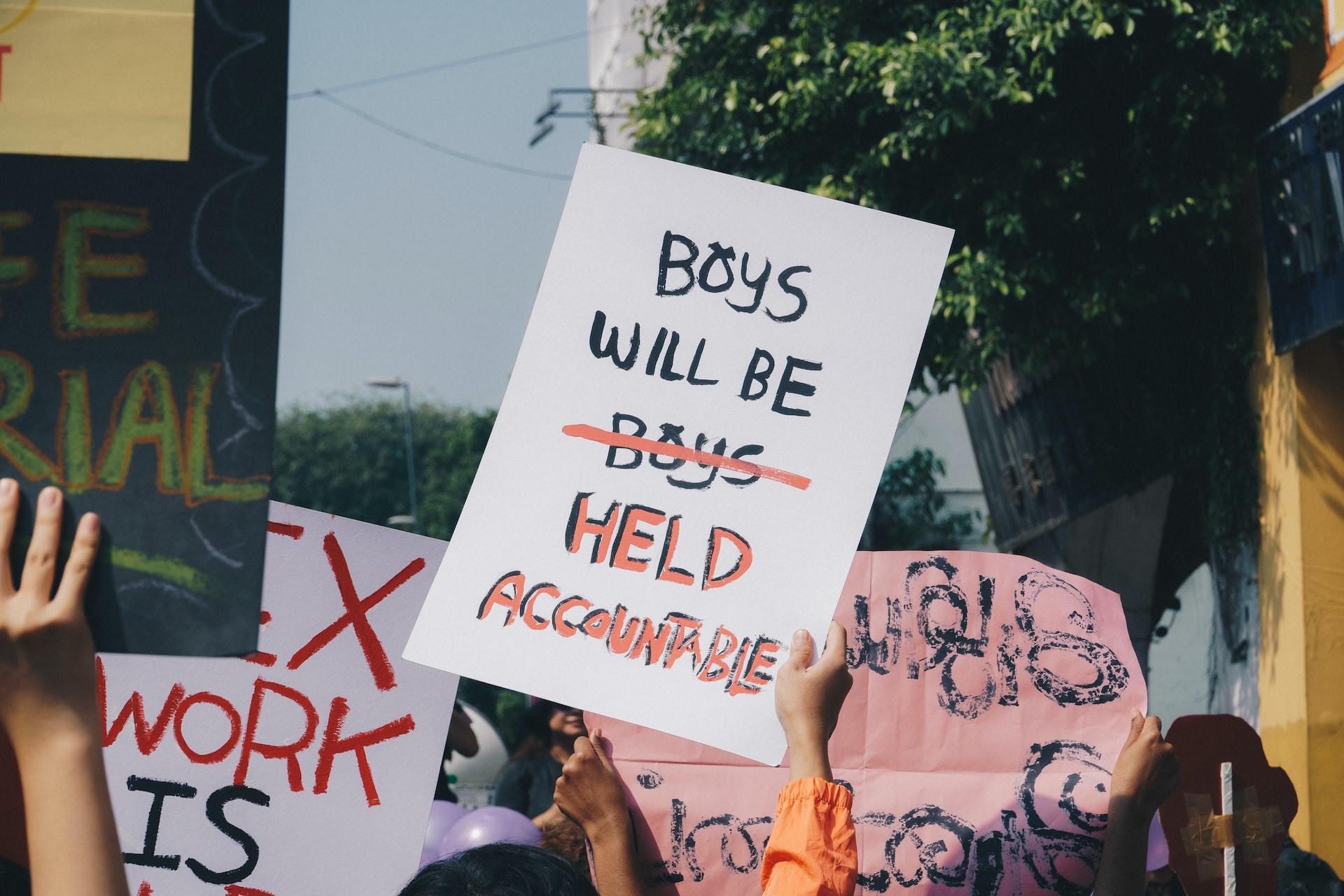 Sometimes I get into these rants where I feel super RadFem and want to burn bras. At other times I'm able to rationally put my feelings down into words like a writer and a grown human being. Since I don't smell (or see) any burnt things, I can safely assume that I haven't blacked out and burnt any bras - which are super expensive, so why would anyone want to burn them? Instead, this article will sum up, what I feel most women go through daily. You may not know this but locked away in the deepest corner of each of our hearts are so many fears and so much anger. While some of us can vocalize this by trash-talking on social media, others keep it stuffed way down next to the memories of when you tripped and fell into dog poop as a 10-year-old.

You see, women everywhere are struggling. No matter where or when or how we were born, we struggle and, in many cases, suffer. Nature blessed us (or cursed, it's still undecided) with an X chromosome instead of a Y, and that’s the fountain from which our problems seem to flow. Despite this, women always try to look on the bright side. But no matter where we were born, we all feel the stigma of being a woman, whether it's because of that pervert neighbor who tries to spy on you when you change or that belligerent cabbie who threatens to slap you because you told him to stop talking on the phone while driving. Occurrences like this make me wish  Amazonians existed because they are renowned in mythology for being completely independent and excluding men from their community. They were also great warriors, and I feel that, in the present day, would totally give deserving men a taste of their own violent medicine.

Sexism isn't something that developed overnight. It exists exclusively because of outdated mindsets and traditions. It started when the first caveman realised, he was physically stronger than the other sex who occupied the earth and decided that physical strength was a measure of everything. Men have used this through the ages to keep women “in their place.” And if you ever bring this up around many men, they get super defensive and say, ”Hey, we're not sexist. Stop male bashing and generalising. Stop being such a bra-burner”. But the truth is women are forced to generalize; we have no choice. It’s difficult to talk about a system that so clearly favours men while constantly stopping to say,” it might not be you, specifically, male friend, but it is others of your sex and the fact that the world is geared to serve and benefit men in general.” Not just that, but we are still paid less for doing the same work; we’re told that our place is in the house serving men; that women should be seen, not heard. These and other tonnes of examples throughout society show how women are right down at the bottom of the social chain, and it’s 2022!

While we agree generalizing isn't the solution, and we agree that there are many men out there who are amazing, there's no other way we can respond after having been molested by some jerk on the subway or the bus or at a club. When something happens repeatedly, perpetrated almost uniformly by men, there’s really nothing else to do. Women end up generalising because they don’t know to which random man they might become a victim next. Fear is what causes us to generalise. Because we’re not oracles who can tell what someone has in their mind, and so we are forced to treat an entire group with fear and mistrust. Generalisation is a consequence of too many injustices.

After an incident like that, our first instinct is terror, followed by humiliation, anger, misery, relief, and guilt. We feel terror and relief because he only pinched your ass; it could have been way worse. Humiliated because some random horrible man grabbed your ass in public, angry  because you feel violated; how dare he touch you in that way without your permission. We feel Anger because we couldn't beat him or defend ourselves at  that moment and most of our friends probably told us to let it go when we  really shouldn't have let it go or didn't want to. Moreover, if you tried to go to the cops, they also tell you to let it go. Then you feel miserable because you have boatloads of male friends, and you always felt safe before, but now because of this one incident, you will always be less trusting and view every guy with a suspicious eye which is sad and horrible, and now you will always,  feel unsafe anywhere you go all the time. Guilt, because somehow you think it was the way you dressed or behaved that bought it on.

The last one is especially horrible. Why should we have to blame ourselves for many men being out-of-control pigs whose inherent cheapness and sexism are the problems? Why has society conditioned us to believe women are responsible for sexual assault, that it’s somehow the clothes we wear, the time we go out, that we drink? And this is where even a saint will end up generalising. After something like that, it becomes tough to look at any guy and not see that same quality. It’s psychological. If you’re bitten once by a dog, you will be afraid of all other dogs. Let’s say it happens again, and then a second and third time. Unless you have a terrible survival instinct, you will have a healthy fear of dogs after that. Sexual assault is infinitely more traumatic than a dog bite. People say that you shouldn’t judge other people based on the actions of one individual, but that’s downplaying the trauma they have suffered. To tell them that they should deal with trauma in a certain way because you feel it’s the wrong way is  terrible. You cannot possibly know the impact something like this has on a person.

For many guys, the whole concept of getting your ass pinched might not seem a big deal, but guys picture a girl doing it to them and go like, ”Tee Hee, that's so sexy.” But it's not like that for us. It never will be because no woman will ever go around pinching man bottoms. I'm not denying the existence of men being sexually assaulted. I'm just saying it's less common than a woman getting raped with iron rods. It's a context and frequency thing, not a severity thing. In the US alone, the disparity between victims of sexual assault speaks volumes; 81% of women and only 43% of men. Apart from rape, there's also the violence factor. Violence is still mainly  the domain of men. Even violence against men is mostly perpetrated by other men. These are not imagined statements; these are facts, backed-up statistics. Men commit comparatively more violent crimes than women, on average.

I suspect that now, in the depths of their hearts, many women are jaded about life. The world and society are still inherently patriarchal, and there is documented proof of crimes and violence against women. Want proof? Well, it is a crime not to educate a female child, and still, there are countries in the world where girl children are not educated, but boys are. It is a crime to rape a woman, yet statistically, the percentage of women who are sexual assault survivors is  higher than men. It is a crime to force marriage at 13, and it still happens, even in the US. It is a crime to pay women less than men for the same job, yet the wage gap exists. So, women adjust. We adjust so that we’re not ostracised and punished for wanting to think less of ourselves. And if we're inflexible or rigid, the names we get are aggressive and stubborn b****.

Many people like to point out how progressive society has become and how women are being treated equally. I want to say using the term progressive for doing something that should normally be done is sad. Progressive implies people are more welcoming of globalisation. Progressive is when society starts being more environmentally friendly. Progressive is not saying, "See, women are now equal to men." We were always equal to men. Society assumed we weren’t and treated us like that until a bunch of men stood up and decide to support the women who refused to take this lying down.

The changes are not happening fast enough. Biases are not being erased fast enough. Women are still forced to conform to stereotypes and punished passively if they don't. Harassment doesn't just happen in the workplace. Women are harassed by their landlords for living alone. Women are being looked at negatively for not being married, interested in relationships, or divorced. Women are viewed negatively for not automatically giving up their careers to sit at home with their kids. These biases aren't initiated and propagated by men. A lot of women do this to other women. Society isn't made up of just men. The other half is women. It's time we accepted that it's not just men who mistreat us; women treat each other equally poorly. And we set an example. If women can't treat other women right, how can we expect men to treat us right? Ironically, I think the root cause of sexism lies in our inability to be united as a gender. And me saying these things doesn’t make it a fact. The fact that it happens makes it a fact.

Women try to deny the crimes of the men in their families. They hide it thinking they're 'protecting' something. I'm quite frankly not sure what it is they're protecting. It's certainly not their kids. Children who grow up in such households grow up thinking that's the right way to behave. The son of a wife-beater will grow up to be a wife-beater himself. A girl who's spent her life watching her mother getting thrashed around the house by her father will grow up to marry a man who beats her up[3][4]. Obviously, this is not the case all the time, every time, but if this happens even in, say, 1 out of 10 cases, isn't that enough motivation to stop this? At the end of the day, women need to take a stand. Unanimously and together. We are not responsible for the crimes against us, but we are the ones suffering, so it is our problem, and we must  do something about it.