Why Criticise Just For The Sake Of It? 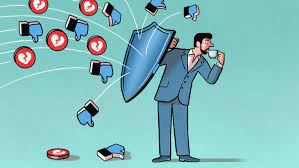 Gen Z liberally boasts of the significance of uniqueness in its culture be it Frida Kahlo's self-portraits sporting the unibrow or Andy Warhol's Campbell Soup cans gaining fame for the idea. Millennials rarely refrain from attaching hashtags of self-love, individuality and acceptance in their social media advice. But the darker side of this phenomenon is instant hatred for anything which used to be contemporary barely a decade ago. The elders are questioning the sanity of the youngsters while the latter is accusing them of being narrow-minded, a logical bargain of change is not even in sight. This situation may remind us of the iconic Rang De Basanti dialogue, "One foot in the past, another in the future. No wonder we are pissing on the future." Today people seem hard-pressed to disparage people and ideas revered by their parents just to prove that they have a wider range of thinking and while doing so they give a wide berth to rational evaluation. Ideology is meant to be debated but the life of the representatives of those philosophies is not. This addiction of finding faults in everything that is considered good may seem cool right now but it's a ticking bomb in the long run.

There has been a growing dissent in Africa and some countries of Asia regarding the removal of statues and other symbols which represent the colonial legacy. It began with Cape Town when an enraged student bathed the statue of Cecil Rhodes with a bucketful of human faeces. Rhodes said that Africans were a "subject race" and the white rule was the natural order singing in chorus to the spurious concept of white man's burden. Certainly, if a man with such views existed today, he wouldn't be respected by most but the reality is he lived in the colonial era. The human psyche can only have inventiveness in certain aspects so he was not being unnaturally cruel but probably making the best out of what was given to him.

This chauvinism dates back to the time of Aristotle. He was a supporter of the institution of slavery and was in favour of more stringent punishments for slaves because "Slaves feel less pain". This laughable analysis was done by the intellectual Greek but as any student of history might know, the Greek city-state at the time thrived on income generated by slavery. People like Aristotle and Rhodes were not cruel, chauvinistic or conservative for ideology but economy. Moral books however bright can never surpass the lustre of coins and that's exactly what they and generations ahead were and are chasing. Their basic ideas must be respected and that level of thought must be employed to tackle the problems we are facing today. Criticising their ideas for their non-applicability in the current scenario is a futile exercise.

The Glass will always be Half empty

Recently Virginia Woolf's Bloomsbury statue is facing protests as some claim that she was a racist, weren't all English citizens just that long before the world war. The US wants to remove the statue of Columbus as he represents Britain's imperialism as if the US itself never meddles in the affairs of other countries. Removing statues would achieve no goal if the mindset of people remains the same. Indians still consider anything western to be better, that's the reason most Indian brands who wanted to be popular made their company names in a foreign language be it Lakmè, Jaguar, Da Milano, Louis Philippe, Allen Solly, Monte Carlo, Peter England, Hidesign even Old Monk. Statues or books must be considered a part of history and should be preserved as it is to understand it. As the adage goes, "Those who ignore history are doomed to repeat it." This cynicism hasn't left TV series and literary series. The famous sitcom F.R.I.E.N.D.S. is maligned for being homophobic and racist as some of its jokes seem insensitive. People forget that it showed the life of 90s Manhattan, not 2022, maybe if it was made today things would have been different but calling the show on it is irrational.

For example, Trevor Noah was right in pointing out the hypocrisy of some journalists implying that the "relatively civilised and relatively European Ukraine" deserves more sympathy than "developing, third world nations" and that was CBS news correspondent Charlie D'Agata "choosing his words carefully". Noah said in his scathing comeback "Let's forget the racism - oh how I wish that we could forget about the racism. You do realise that until very recently, fighting crazy was Europe's thing? That's all of European history, they fought something known as the 100 years' war. " This can bring change and as the one who said this will listen to it, the person might change his perspective which will serve the purpose. But criticising Rudyard Kipling for his colonial glorification and Robinson Crusoe for making the hero call a native man Friday because he found him on that day won't solve anything. Gandhi is being criticised for his ideas of sex being only for procreation and Martin Luther called his version of a nation "the hell of celibacy". He also had the weird logic of sexual activity causing constipation and harsh facial features (now you know Gandhi wouldn't have been a fan of Jamie Dornan's chiselled jawline and angular face, no 50 shades about it). Sexuality is a taboo subject today, back then it would have been pure evil. Maybe if he existed today he would have had a different view not that we would ever know.

Viewing the past through the contemporary moral prism deviates from their basic sense. So the trend of criticising old things holds no meaning. As Aristotle said,

"There is only one way of avoiding criticism:

Tags: hypocrisy of some journalists De-westernisation