Why do millennials (seem to) love Nietzsche, Bukowski, and the like? 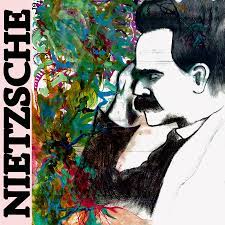 Pop culture today adores the philosophy of previously unconventional writers like Nietzsche, Bukowski, Edgar Allan Poe, and Dostoyevsky. It can be a Hollywood movie with testosterone-fuelled teens refusing to conform to society quoting Nietzsche or Taylor Swift's lyrics being creepily similar to Edward Allan Poe's poetry. It's even in Bollywood's classics like Phir Subah Hogi voted one of the youngster's retro favorites, an adaptation of Dostoyevsky's Crime and Punishment, or the unnatural glorification of unrequited love common in almost all of them. So why are millennials globally able to connect to these people and why do most experts of philosophy call it a misguided bandwagon?

Why these and not those?

A cursory glance at Nietzsche's or Bukowski's writings gives great insight into the author's perspective of pain, suffering, betrayal, love, and religion. The difference between classical treatises and these is that they do not force acceptance by logics of karma or God but base their views on human psychology. Earlier religion was used as law by the clergy to exploit people but Marx said, religion is the opium of the masses. This statement is more likely to be accepted by the cynical youth of the day. It would surprise most that the "What doesn't kill me, only makes me stronger" phrase used in almost all motivational speeches so far was penned in German by Nietzsche. He does not propagate the tough, forgive and forget mantra but suggests never trusting the betrayer again which is more rational. Though his philosophy is called existentialism, it may fall into a category of good old realism. Nietzsche denied the possibility of heaven or hell as it is the same stone-cold world for everyone. He taught people to find beauty in pain, as it is real, and proves that one is alive. His words give strength to all irrespective of the situation they face, "There are no beautiful surfaces without a terrible depth." Similarly, nearly a century later Bukowski took that role in encouraging anyone who has felt cornered for his/her ideas, with his bizarre and rebellious poetry -

I have my madness

I live in another dimension

and I do not have time for things

that have no soul."

Additionally, these quotes or poems are like snippets of brain food, one can keep ruminating on. No dusty leather-bound books are containing single rhythmic poetry like Paradise lost to work as a soporific, they are simple and striking.

The hermeneutics of suspicion essentially is a kind of skeptical literal interpretation to find latent clues and meanings in light of recent information. The current generation tends to analyze the life of the preacher before listening to the sermon. The life of these philosophers seems as interesting as their books. Edgar Allan Poe, the pioneer of dark romanticism died as if he wrote the screenplay of his end. He was missing for four days before being found in a hysterical state wearing clothes not belonging to him and with no recollection of his identity. He passed away mysteriously two days later, just as he had written "the boundaries which divide life from death are at best shadowy and vague." Dostoyevsky's uncanny similarity to the character of 'innocent' Rodion Raskolnikov intimidates the readers. The movement of realism and dark romanticism replaced pure romanticism with the former taking up topics of daily interest and the latter displaying a fascination with the demonic. While earlier a majority of the population read John Keats, William Wordsworth, William Blake to enjoy nature, now they began preferring novels of Mark Twain, Leo Tolstoy, and Charles Dickens. Nietzsche jettisoned the teleology of romanticism and grounded himself in the Darwinian concept of naturalism to an extent, agreeing that life is a tug of war between survival and domination.

Freedom in flaws and juxtapositions

In ancient epic literature, the protagonist is perfect in every aspect but now stories are about flawed characters redeeming themselves. Millennials want to read about someone who has had issues and has successfully overcome them. The time when heroes are images of God and villains are rotten to the core is long gone. Like people around us, the media portrays humans vacillating between right and wrong. Another point to be considered is the various ways in which Nietzsche or Bukowski can be interpreted. No specific lines are confining them but an amorphous cloud of work, casting a different light each time one reads it. For instance, for a person believing to be in love, Nietzsche writes, "There is some madness in love. But there is always some reason in madness." and for the one who is disillusioned of it he said, "Ultimately it is the desire, not the desired that we love." Bukowski often inspires people in tough phases and his poetry convinces you that you are not alone and things are not as bad as they look, "You have to die a few times to live." In an interview, he said that he saves lives which by the poetic license is acceptable when he was discussing the feedback he received. A fan wrote in his letter that "Bukowski, you are so fucked up and you still survive. I decided not to kill myself."

Religion was one of Nietzsche's favorite topics of discussion and "God is dead" remains arguably the most controversial sentence in his philosophy. Nietzsche was raised as a Christian but remained an atheist in his adult life. He believed that the two things leading Europe to its demise are alcohol and Christianity. His views were criticized and when 134 years ago he wrote 'Gott ist tot', in The Gay Science the shit hit the fan.

"God is dead, God remains dead and we have killed him."

Was Nietzsche happy with 'God's death?

It is not God the creator he is referring to but God as an institution that is dead. It was after the Enlightenment that it was proved that philosophy did not need to be organized on the theory of divine rights. The mispractices that had taken firm root in Christianity made it impossible to salvage it. Contrary to the thought that he was a pessimist, he was scared that the removal of Christianity would cause a nothingness in people, taking away their will to work. He feared nihilism as is reflected in The Will to Power and wanted conscious thought to replace it. There are still "misguided sheep" laying the blame of their actions on God by terms like Jihad, Nietzsche saw it earlier and had said, "God is dead, but given the way of men, there may still be caves for thousands of years in which his shadow will be shown." He suggested personal value development for each person living in the world. He meant that God's empirical place in society has ceased with all phenomena explained in terms of science not the "will of God." Bukowski came later when atheism was not considered taboo at least in a cultural melting pot like America. He believed that religion is a way of explaining the unexplained, trying to split hair on it was futile. One might see an inspiration of the sacred game's dialogue "Apun ko to lagta h apun-ich Bhagwan hai '' and the increased use of alcohol and parties in songs or dramas.

The younger generation has this subconscious tendency to gravitate towards those who have been wronged by fame. There is a famous science rivalry between Nicola Tesla and Thomas Edison, where Tesla voted for alternating current and Thomas for direct current. We all know that AC won but still, Tesla remained highly unrecognized until the last decade. It is the visceral feeling to rectify this that led Elon Musk to name his company after him and science buffs to talk endlessly of the eccentric scientist in recent years. We are also experiencing a return of Gothic literature with a modern twist in Dan Brown's books. Professor Robert Langdon explores clandestine castles with secret passageways leading to ancient cabins in the series. Bukowski touted as the godfather of lowlife literature was a master at showing sensitive juxtapositions with his riotous storytelling. People want to feel both unique and comfortably settled in the society and following Bukowski or Nietzsche gives them both solace and commiserations. They also inspire dilettante art of every kind. Nietzsche's love for music and dance is well known but seldom it is mentioned that he tried his hand at composition. One of his pieces caused Wagner a laughing fit and he suggested to Nietzsche's doctor that it is a result of excessive masturbation. Such anecdotes serve to uplift the interest of youth. As the man himself said, young people, love what is interesting and odd, no matter how true or false it is. A more mature mind loves what is interesting and what is odd about truth. Only fully mature intellects believe the truth even when it is plain and simple.

Last but not the least, at times when no one agrees with what one says or thinks, people are driven by an instinctive need to validate their ideas. Nietzsche provides the best reprieve in such a situation with his iconic words,

"And those who were seen dancing were thought to be insane by those who could not hear the music."