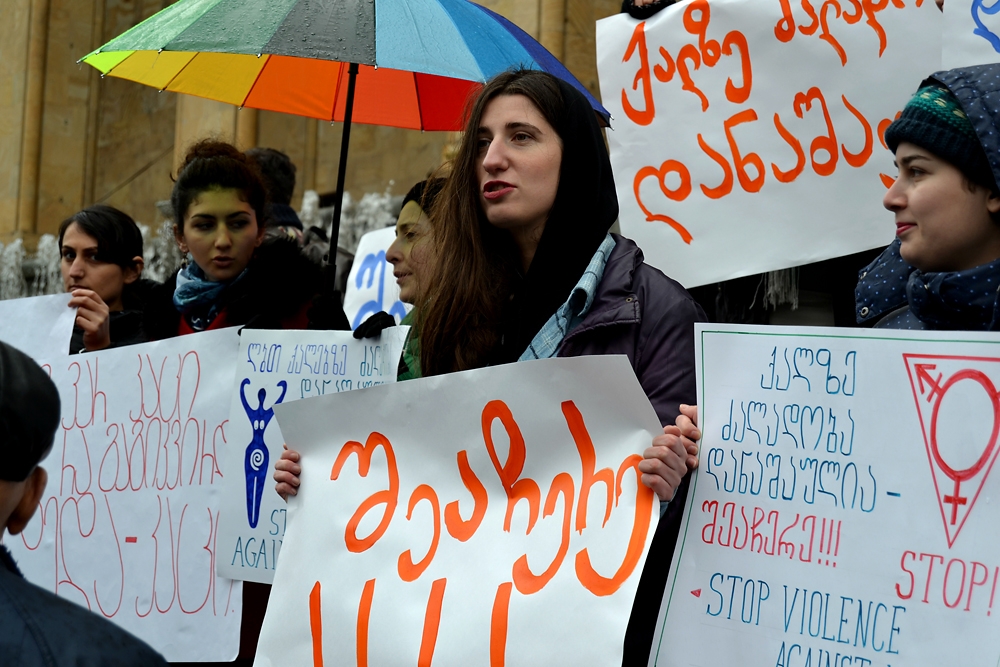 Rally participants in several cities around Georgia holding posters written with “Stop!” and “Violence against Women is a Crime!” (Photo: Giorgi Lomsadze).

Since the dissolution of the Soviet Union, the former Soviet states have gone through a fast, often painful process of modernization. While most efforts have been put into areas like politics and economics, other sectors have been put on the backburn. One of these is gender equality, a concept that still needs to be addressed as it often clashes with a strongly embedded traditional masculine mentality, leaving very little margin of action for women. A radical change is therefore warranted to align these countries with the Western models of social and gender equality.

In 2020, the European Union and the United Nations tried to fill some gaps by launching the "EU 4 Gender Equality: Together Against Gender Stereotypes and Gender-Based Violence," a three-year regional programme to improve gender equality and combat gender-based violence in Eastern Partnership nations. This is the first endeavour organised within the Eastern Partnership region to address gender equality simultaneously in Armenia, Azerbaijan, Belarus, Georgia, Moldova, and Ukraine. The overall aim is to question the well-rooted assumptions and old-fashioned stereotypes that favour gender-based violence in society. To achieve this, the programme aims to distribute and coordinate its actions between governments and civil society organizations. The partners are UN Women Regional Office for Europe and Central Asia, UNFPA Eastern Europe and Central Asia Regional Office, UNFPA Armenia, UNFPA Azerbaijan, UNFPA Belarus, UN Women Georgia, UNFPA Georgia, UN Women Moldova, UNFPA Moldova, UN Women Ukraine, UNFPA Ukraine.

In these six countries, problems like limited growth prospects and decision-making power; gender-based salary differences; frequency of gender-based violence; and damaging practises such as child brides and gender-biased sex selection are still a bitter reality. Consequently, the program has elaborated on three main objectives: to challenge patriarchal values that limit women's rights and opportunities by shifting perceptions about gender stereotypes and the position of women and men in the family; to improve men's participation in the household, caretaking responsibilities, and participation in initiatives that improve active fatherhood; and to encourage the implementation of good strategies in programs that work with abusers and improve preventive strategies. Moreover, tackling the problem of gender imbalances and the lack of women and girls` empowerment is in line with the UN Sustainable Development Goals (SDGs). Although significant progress has been made in the area of gender equality over the years, prior measures were often not synchronized or were undertaken unilaterally, limiting their impact and lowering their long-term effects.

Georgia provides a case in point. For instance, when it comes to rape, Georgian legislation remains vague, and many victims cannot find justice. The Georgian penal code describes rape as "any form of penetration of a sexual nature of the body of a person with any bodily part or object, committed with violence, under the threat of violence, or by abusing a helpless condition of a person". According to Tamar Gegelia, an associate professor of law at Caucasus University, the law's narrow definition requires the victim to physically resist the abuser and that violence be visible on the victim's body. Moreover, the victim must prove to have fought back. As pointed out, victims react in different ways; some do not react violently and just freeze out of fear of being killed. As OC Media rightly points out, the problem is perpetuated by Georgia`s lack of commitment to international law, although the country signed, in 2014, the Convention on Preventing and Combating Violence against Women and Domestic Violence, the so-called Istanbul Convention, ratified in 2017. This Convention requires the signatories to explicitly criminalize forced sexual acts. Although amendments have been required by several groups, no progress has been registered to date.

The EU4Gender Equality Program tried to tackle this problem by strengthening the police services. In 2021, 74 police officers (52 men and 22 women) from the Georgian regions of Tbilisi, Imereti, and Guria attended a training session, where they learned about gender-based and domestic violence, relevant legislation, the necessity of helping victims, and the importance of carrying out proper research. The training also discussed restraining order processes and legal decisions that affect gender-based violence cases. This will help police officers to act on a legal and just basis. The police training was realized with the support of Georgia's Ministry of Internal Affairs Department of Human Rights Protection and Investigation Quality Monitoring, which evaluates the work of police officers and investigators.

Within the framework of the EU4Gender Equality Program, substantial work has been done to fight against the stereotype concerning fatherhood and child-care, traditionally considered a maternal obligation. In 2020, the book “Luna and the Planet of Fireflies” was released thanks to the support of the United Nations Population Fund (UNFPA) Georgia Country Office and the European Union in the framework of the MenCare Campaign. The book is a breakthrough as it offers a revolutionary representation of the traditionally gender-based role in the family. As the author, Dato Gorgiladze, explains, the text aims to dispel prejudices about family arrangements and domestic labour allocation, which are still persistent in Georgia. Society still believes that men and women have different types of duties. Activities like caring for children, changing diapers, cooking, and feeding them are a mother's duty, while the father engages with his children in his spare time when he can. The book aims, therefore, to emphasize the importance of men's roles as caring fathers, husbands, and partners. Encouraging fathers’ involvement in childcare and family matters is the first substantial step toward the achievement of real gender equality to improve women's, children's, and family well-being.

The EU4Gender Equality Program believes that engaging young people is necessary to break gender-based stereotypes. With the support of the United Nations Population Fund (UNFPA), many young Georgians came together in Borjomi from March 26-29 for a training of trainers organized to encourage small initiatives to change gender-based social norms. The young participants firmly believe that knowledge, competencies, and new skills are the keys to changing the present and having a better future where everyone, regardless of gender, can access equal opportunities. The three-day event is based on the belief that every small step taken will contribute to individual self-accomplishment and a better future. Accordingly, empowering young people by breaking gender-based stereotypes is a wise strategy for a successful country because today’s young people will be tomorrow’s leaders, educators, and parents.

The EU4Gender Equality Program came to Georgia to alleviate decades of inequalities. According to UN Women, active in the country since 2001, data shows that the situation is dire. Based on gender perspectives, men dominate many aspects of social, economic, and political life, and inequalities between men and women persist. There is a considerable gender difference in labour force participation, with a salary gap of up to 35% between men and women. Women's business ownership is restricted. Female-headed households marginalise social groupings among internally displaced and conflict-affected communities, and women from other excluded groups are also exposed. Women's political participation is minimal, with only 11% of lawmakers in national and municipal administrations being female. Violence against women and girls has also become a public problem.

As well-documented by Natia Mestvirishvili in her 2017 article, there are still biases and prejudices against women in Georgia. One of these concerns selective abortion, a widespread problem in the South Caucasus. The desire to have a son led, in Soviet times, to flexible reproductive policies in which couples continued child-bearing until they had a male. The collapse of the Soviet Union and the dire consequences for the economies of the countries involved, brought about a fertility decline. Georgia was no exception, with more and more couples resorting to birth control practices for sex selection, like selective abortion.

Fortunately, this practice seems to have declined as Georgia has been able to stabilize and reverse its disproportionate sex ratio at birth rate (SRB). This was achieved through the improvement of the social security system, general economic conditions, rising fertility rates, women's economic empowerment, and the increased cultural influence of Western values. Georgia is in a unique situation because of this trend reversal, and it may provide significant lessons for other countries facing similar challenges. Nevertheless, the country will still need time to reverse its traditional patrilineal system based on son preference. Accordingly, in terms of child sex preferences, the Caucasus Barometer showed that people are more inclined to prefer boys to girls.

Nevertheless, certain behaviors are still not accepted. For instance, university degrees are considered more suitable for men than women; drinking alcohol and smoking tobacco is not appropriate for women; living alone without being married or having sexual intercourse before marriage is unthinkable; having children without being married is almost taboo. These ideas are based on the mentality that a woman finds more satisfaction in taking care of the household and that her career will never be as successful as a man's.

As is well-known, changing a well-rooted mentality is a generational phenomenon and cannot be achieved in a few years. Georgia, like many other post-Soviet space countries, is now coming to terms with new ideas imported through Western values. Gender equality is one of these. Notwithstanding the recent steps undertaken by international organizations like UN Women and the European Union, time remains the necessary ingredient for their successful implementation. For the new generations born in a post-Soviet society and exposed, since their birth, to Western values it will be easier to absorb and substantially implement these changes. The baton of a brighter future is therefore handed to them.