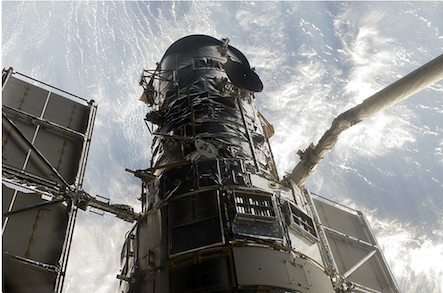 Since 1990, the Hubble Telescope has been aiding NASA’s pursuits in Space and Discovering its secrets.

Named after Edwin Hubble, the astronomer who discovered many ways to expand how we see space as a whole, as he established extragalactic astronomy as a field and is generally regarded as the leading observational cosmologist of the last century.

Even his dissertation on Photographic Investigations of Faint Nebulae, which he wrote in his teens before enlisting in the first World War, was impressive enough that his observation work at the Yerkes Observatory, featured in his dissertation, and got him a position at Mount Wilson Observatory, under George Ellery Hale, who was looking for new staff and even kept the position open for Hubble when he returned from War.

Hubble then studied the nebulae in the Milky Way, finding himself stuck on the Spiral Nebulae, which he had investigated about in his Dissertation. Much was unknown about them from previous years, as visible galaxies had fallen out of favour of being debated about until the twentieth century, probably due to not enough evidence of such galaxies that could be used.

So, when Hubble found in 1923 the Cephid variable, a star collection whose light helped measure how old, how hot, and how far away they were by what colours they burned with. Their luminosity showed Hubble that these were, in fact, quite a bit further away than they had been thought, within the well-known Andromeda Nebula, which meant that the Nebula was roughly approximately 900,000 light-years away.

That meant that, if what Hubble had discovered was correct, the Nebula was, in fact, far beyond the Milky Way Galaxy, which in some parts, is 300,000 light-years wide and couldn’t possibly be a nebulous cloud or star cluster, as previously thought, in the Milky Way.

Since the six space missions which updated parts of the Telescope named after him, or more accurately, a whole space-based observatory, has worked for over thirty years since being launched by the Shuttle Rocket, Discovery, according to NASA, it has:

“-Made more than 1.5 million observations over the course of its lifetime. Over 19,000 peer-reviewed scientific papers have been published on its discoveries, and every current astronomy textbook includes contributions from the observatory. The telescope has tracked interstellar objects as they soared through our solar system, watched a comet collide with Jupiter, and discovered moons around Pluto. It has found dusty disks and stellar nurseries throughout the Milky Way that may one day become fully fledged planetary systems and studied the atmospheres of planets that orbit other stars. Hubble has peered back into our universe’s distant past, to locations more than 13.4 billion light-years from Earth, capturing galaxies merging, probing the supermassive black holes that lurk in their depths, and helping us better understand the history of the expanding universe.”

Now, they are discussing making some changes to prolong its longevity with SpaceX.

Elon Musk’s space launch provider has agreed to enter a partnership with NASA to launch Hubble further into space to discover even more images of the wonders of the likes we have yet to see, with the help of their spacecraft, The SpaceX Dragon II.

Currently, the Dragon has flown both people and cargo into space and is the only one significantly to return significant numbers of cargo to earth. How much Cargo is unknown and seems to be kept a secret with SpaceX and perhaps NASA, but with thirty-five launches in total, thirty-two of those being to the International Space station, and another fifteen being reflown missions, with plans to help Artemis I missions and beyond to Mars, according to an update made on April 16, last year.

After schedule slips, the first crewed flight launched for the Dragon II was on 30 May 2020 with the launch of the Demo-2 mission.

Reportedly, seats on the Dragon cost upwards of around fifty two million US Dollars per seat, which is currently £45,896,24000 pounds in today’s current exchange rates for the Great British Pound sterling.

According to Space flight Now’s assessment of the Press Kit for SpaceX’s Dragon II,  although the demonstration mission was only carrying cargo in 2010, the Dragon II was designed from the outset with crew- carrying capability in mind and SpaceX has developed necessary systems for transporting crew, such as seating, a launch escape system, and environmental control and life support systems.

The Dragon II currently has the most powerful heat shield in the world; designed in cooperation with NASA, it is made of a material called PICA-X, a high- performance variant on NASA's original Phenolic Impregnated Carbon Ablator also known as PICA, and has specifically been designed for lift during precise landing and low Gravity forces on re-entry to Earth.

According to a popular online Newsletter, How to Geek, “The plans are still in the early stages, and right now it’s more of a model for other servicing missions than a firm plan specifically for Hubble. NASA said in a blog post, ‘SpaceX — in partnership with the Polaris Program — proposed this study to better understand the technical challenges associated with servicing missions. This study is non-exclusive, and other companies may propose similar studies with different rockets or spacecraft as their model.’

The plan, in its most basic form, is to restore Hubble to the original position and elevation that it had in the nineties when it was first launched, as many satellites within the orbit of the earth lose their altitude, which in Hubble’s terms, will accelerate further as it comes to earth.

Whether servicing Hubble will add more longevity to its life up in the stratosphere is debatable, as it has in the past, but one thing is for sure, NASA plans to “safely de-orbit or dispose of Hubble” when that time comes; I am sure NASA will keep everyone interested, informed properly, just like they do on their social media platforms, like their Youtube or their official website, as usual.

However, despite the fact that the James Webb telescope is much more advanced and powerful than Hubble, both Telescopes were both pointed at DART’s mission to strike moonlet asteroid Dimorphos, which is a small asteroid orbiting another much larger one, Didymos. 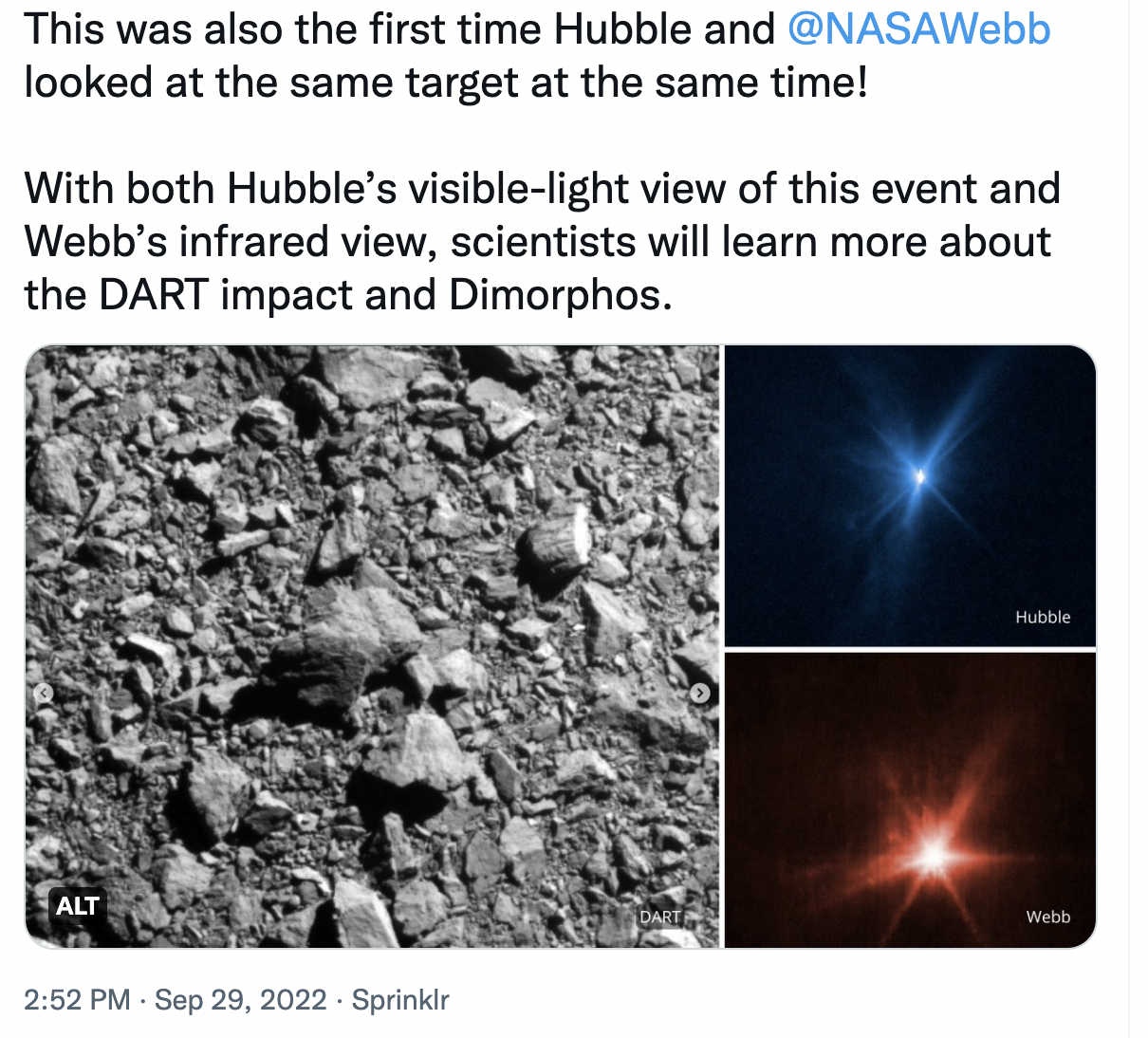 Both telescopes are helping observe the move the DART programme (or Double Asteroid Redirection Test) made to the Moonlet and its larger source of orbit.

One thing is for sure, Hubble’s discoveries (Both the astronomer and the Observatory) will part of our history as Humanity’s expiration of space and studying it to understand it.