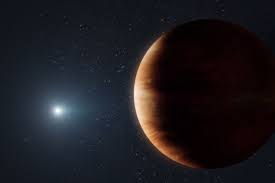 Using direct observations from the European Space Agency's Gaia spacecraft, astronomers have discovered a 'Super Jupiter' around a white dwarf.

The discovery is part of a treasure mine of data included in Gaia's Data Release 3, which offers the most comprehensive scan of our galaxy to date.

Astronomers can generate the most exact and complete multi-dimensional image of the Milky Way thanks to observations collected by the Gaia telescope, which orbits a location in space about 1.5 million kilometres from Earth.

Martin Barstow, Professor of Astrophysics and Space Science at the University of Leicester and Director of Strategic Partnerships at Space Park Leicester, is a member of the Gaia project and has co-authored many studies based on the new data.

A description of 'starquakes', stellar DNA, and a new binary star catalogue with over 800,000 binary systems are among the other highlights of Data Release 3. Only about 30,000 binaries were known in our galaxy before Gaia debuted in 2013.

"Gaia data has been moving through astronomy like a tidal wave. It's the most productive observatory we have available to use right now, and it's transforming both astronomy and our understanding of the Universe.

"This Data Release 3 is a complete step change. All the data we have catalogued using spectra -- stellar distances, ages, composition, and more -- adds an extra dimension to what we know about the stars in our galaxy, and represents a huge leap forward." says Professor Barstow.

Exoplanets orbiting white dwarfs are notoriously difficult to observe. White dwarfs are the remains of stars that aren't massive enough to turn into black holes or neutron stars.

Researchers detected the existence of a companion object with a mass roughly nine times that of Jupiter by analysing the motion of the metal-rich white dwarf WD 0141-675 and observing a 'wobble' in its orbit. This must be an exoplanet because it is too tiny to be a star.T

This 'Super Jupiter' is just the third known exoplanet to circle a white dwarf, making WD 0141-675 the white dwarf closest to Earth to host a planet.