Why some people are always late? 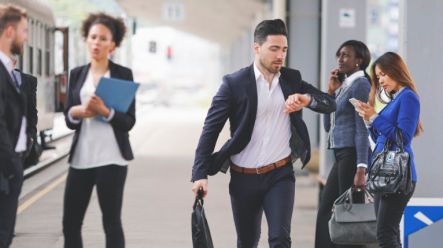 You for sure know at least one person who is always late in a group of friends, which might even be you…

But why do certain individuals struggle with punctuality?

The author of ‘Late’ - A Timebender's Guide to Why We Are Late and How We Can Change, Grace Pace, describes those who are habitually late as 'time benders'. These individuals struggle with punctuality but under tight time constraints, they can be very productive.

YouGov survey (2014) found that 1 in 5 Americans are punctually challenged to get to work at least once a week - Millennials being the worst at it.

It is a ‘Bell Curve Scale’ - some people are anxious to be early and these are ‘timekeepers’, and at the other end of the scale there are the ‘time benders’ who do not like a routine, and familiar tasks as they get bored fast. However, they focus well when something interests them, and in a time crunch, they can work effectively. In an office, the ‘time benders’ are easy to spot – they are the ones with messy desks because they do not tend to finish one thing before starting another. Thus, this trait can be seen as being baked into our personalities.

Particular personality traits might be making such individuals to be regularly late. Conscientiousness is one major personality trait for laziness, along with agreeableness, extroversion, openness, and neuroticism. This can be measured by asking them how tidy, organized, and punctual they are.

Those who struggle with punctuality have a different perception of time – every minute is not the same length for them. They can get deeply engrossed in one activity and not be aware of the time at all. However, if they have to meet a deadline they can work effectively. This theory is enforced in 2016 by Washington University psychologists in the Time-Based Prospective Memory study.

The most revealing idea that came out of Grace Pace’s research was that ‘time benders’ are not late for everything, they can be on time when it matters. This means that they are aware of the consequences of being late so they will make sure to be on time – such as when having to catch a flight.

Pace: “The times when we slip into our worst ‘time-bending’, are when there are no firm deadlines and no consequences. And that tends to be for social events”. This can be hurtful to the people around us who matter because the ones are seeing them always being late. It is helpful to recognize the power and importance of deadlines. They are important and have real consequences. Asking for or suggesting a deadline will make them take it seriously.

Additionally, people who are expecting one too late make it more difficult for the certain individual, and he/she will more likely be running late. The reason behind this is that individuals just assume that being late is part of their genes and makeup and that one will not even try to correct that behavior. Thus, the belief about one’s self is becoming a self-fulfilling prophecy, and that can be self-sabotaging when in fact with a bit of effort it can be changed, according to David Robson, author of ‘The Expectation Effect’.

Therefore, one can change his/her personality as personality traits are neither destined since birth nor set in stone but are rather malleable. This is seen as an exciting recent development in psychology. According to various studies, one could train him/herself to be more conscientious by forming a detailed schedule for each day, setting aside some time to organize his/her workspace, and many more such activities for a couple of weeks. Practicing these sorts of tasks, which highly conscientious people do, and being a bit more conscious about when he/she does them, will form these kinds of mental habits that will retrain the brain.

To conclude, being a ‘time bender’ represents to some degree, a part of our personality, making some better at keeping track of time than others, but that does not mean one should accept to be forever the late one. By retraining certain behaviors and setting meaningful deadlines with consequences, one can alter their personality and improve his/her punctuality.