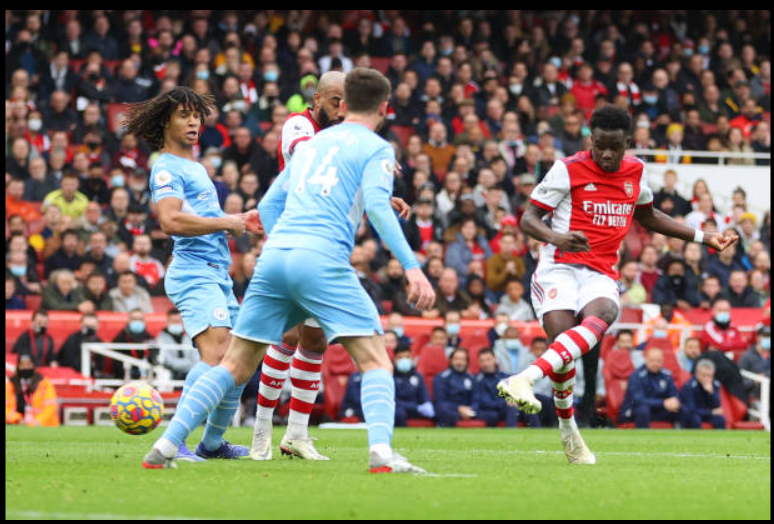 As the twentieth match week of the English Premier League concludes, the race is clearly between the Gunners and the noisy neighbours. Gunners defeated their fearsome rivals Manchester United in a thrilling 3-2 victory, whereas City comfortably walked past with a 3-0 win against the Wolves. With a statement victory at the Emirates, Arsenal cemented their top spot in the Premier League table at 50 points, five more than the second City with fewer played games.

Arsenal versus Manchester United was a Premier League classic reminiscent of the Old Arsene Wenger and Alex Ferguson rivalry. United travelled to London undefeated in the last six matches of the Premier League, whereas Arsenal is in the form of their lives. United opened the scoring charts and stunned the Emirates by plummeting a rocket shot into the back of the net from outside the box. Arsenal’s equaliser came five minutes later through Eddie Nketiah as he weaved past the United defenders to meet the Granit Xhaka cross. Arsenal took the lead in the 53rd minute thanks to a Bukayo Saka screamer from outside the box after successfully evading Christian Eriksen, and the Emirates stadium erupted. United’s response came through a sneaky header from the World Cup winner Lisandro Martinez as he scored his first-ever goal for Manchester United. It seemed both sides were about to share the honours at the Emirates until Nketiah scored a 90th-minute winner to bag all three points for Arsenal. A scuffed Odegard effort inside the United box fell kindly to Nketiah as he made a relatively simple tap-in to give Arsenal a 3-2 victory. Fans and Players are in high spirits as the North London giants are eyeing their first-ever Premier League title since 2004.

In the Etihad, Manchester City cruised past Wolverhampton Wanderers, thanks to an Erling Haaland hattrick. The magical duo of Kevin Debruyne and Haaland came into the forefront again as Haaland met with a delicious cross from Debruyne in the 40th minute. The second goal came through a penalty as Ruben Neves clipped Ilkay Gundegon inside the box. Haaland made no mistake while taking the penalty to increase the City lead by two. The hattrick came in the 54th minute for Haaland as Riyad Mahrez pounced on a horrible error by the Wolves goalkeeper Jose Sa. Riyad Mahrez, after stealing the ball from the goalkeeper, unselfishly put it on a plate to Erling Haaland, and he found the back of the net for the third and final time. He scored four hattricks in just 19 appearances, a new Premier League record.

Manchester City will play their next match against Arsenal in the 4th round of the FA cup. This clash will be the dress rehearsal for the Premier League battle that is coming between these sides in roughly two weeks. The meeting will give a clear picture of this season’s title race.

One Last Battle Between the Two GOATs.