At Least 125 Dead After Riot at Indonesia Football Match 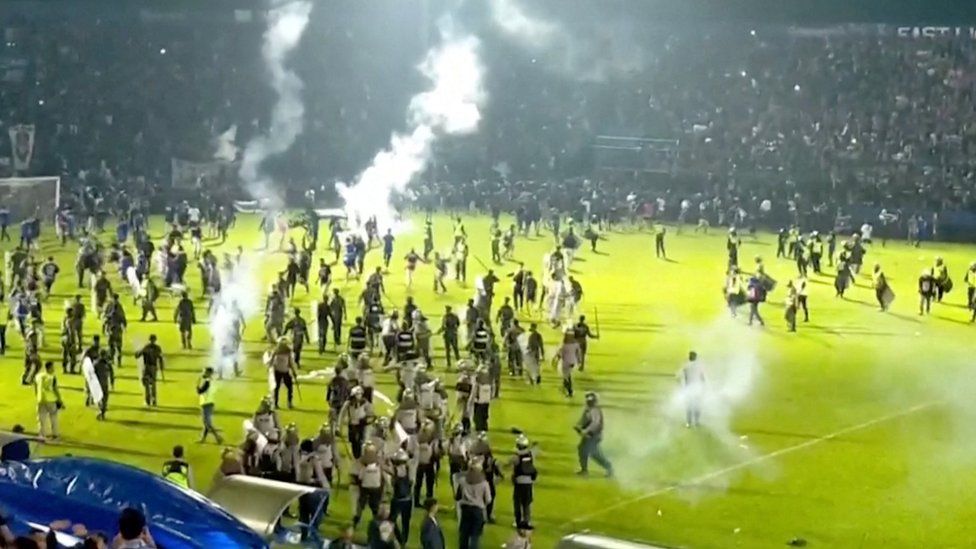 Saturday marked a tragic night for Indonesian football, as at least 125 people died and around 320 were injured during a riot at Kanjuruhan stadium in Malang, East Java.

Thousands of Arema supporters invaded the pitch in anger after their major rivals, Persebaya Surabaya, beat them for the first time at home in 23 years.

They threw bottles and other objects, as well as toppled police vehicles outside of the stadium.

Police responded to these actions by throwing tear gas at the crowd, which led to panic amongst the fans, and a stampede promptly followed as everyone dashed towards the exits.

Many people were trampled to death during the riot, while others suffocated from the tear gas. According to reports, 32 children were included in the death toll.

FIFA president, Gianni Infantino, said of the incident: “This is a dark day for all involved in football and a tragedy beyond comprehension.”

Indonesian police have been under scrutiny, as FIFA does not allow tear gas to be used in football stadiums because it is considered dangerous.

Mahfud MD, Indonesia’s chief security minister, said an investigation has been launched into the tragic incident.

Mahfud issued a statement saying: “We asked (police) to unveil who has perpetrated the crimes and take action against them, and we also hope the national police will evaluate their security procedures."

The local police chief in Malang has now been sacked, along with nine other officers.

Indonesia has a history of football hooliganism, with many bitter rivalries resulting in fatalities. According to a report from Reuters, 74 fans died between 1994 and 2019 due to football-related violence.

One of the most widely reported incidents of this type of violence came in 2018 when Persib Bandung supporters were banned from matches after lynching a Persija Jakarta fan.

The match on Saturday will go down as one of the worst disasters in football history. It sits alongside examples such as Hillsborough, where 97 Liverpool fans perished similarly, and the Peru-Argentina match in 1964, where 320 people died.