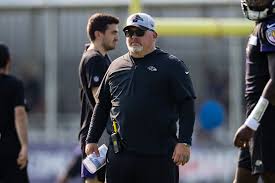 Greg Roman, the Baltimore Ravens' offensive coordinator, has resigned from the position after four seasons at the helm. Roman, 50, led the organization's offense to one of its worst seasons to date, calling for a change in the coordinator's position from fans.

With much speculation and mystery as to what is going to happen this offseason with Baltimore with their star quarterback Lamar Jackson’s contract being up, the departure of Roman could not have come at a better time for the organization.

Roman has been a coach in the NFL since 1995 when he started out with the Carolina Panthers as the quality control coach of the defense. He then followed up with stints with multiple NFL teams, including the Houston Texans, Buffalo Bills, and San Francisco 49ers, as well as a couple of years at the college level at Stanford.

The former Ravens coach became very well known for his success as the offensive coordinator for the San Francisco 49ers as he took quarterback Colin Kaepernick to the Super Bowl back in 2013, ironically against Baltimore. Roman’s offensive play-calling design became unique in the sense that it was a "run-first" style offense in a trending pass-first league.

Following his time with the 49ers, the assistant coach went on to be the offensive coordinator in Buffalo for the Bills for two seasons before he was hired in Baltimore as the tight ends coach. Roman was quickly promoted to be the offensive coordinator in Baltimore two seasons later, in 2018, after the team drafted the Heisman-winning quarterback out of the University of Louisville, Lamar Jackson.

Baltimore, along with the help of Greg Roman, had major success in the offensive department immediately following the promotion during the 2019 season. The team went on to win a league-best 14 games in the regular season with Jackson at the starting quarterback position, winning him the league MVP award by the first-ever unanimous decision.

A unique offensive play style such as the one Roman ran with the Ravens was soon to be "decoded" by opposing defenses in the years to come. thus leading to a decline in the production of offense in Baltimore.

While the future is uncertain for the quarterback position in Baltimore, one thing is certain: A new style of offense is on its way to The Charm City.