End Of A Quarterback Era 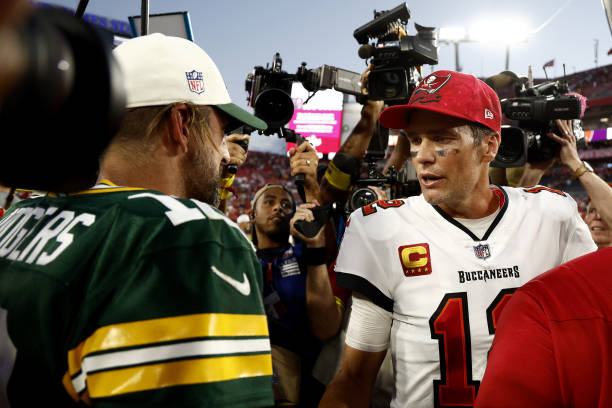 In week eight of the National Football League, The Tampa Bay Buccaneers and the Green Bay Packers each lost, diminishing their records to 3-5 each.  The last time Tom Brady had a losing record seven games into a season was in 2002, and it is the first time in his career that he has been two games under .500.  Rogers has only had two losing seasons since becoming a starter.

2022 is a historically slow start for both MVP quarterbacks who have dominated the NFL for the past 20 years.

The Packers are having their worst season under Matt Lafleur, already losing more games in a season than he has in any previous season.  The Packers’ offense has struggled partly due to the loss of their star receiver, Davante Adams, who inked a significant deal last offseason to play with Derek Carr, a college friend, and the Oakland Raiders.  Their season is just as terrible at a staggering 2-4 record.

While Davante Adams left an unfillable gap in the Packers’ offense, the team struggles beyond losing one wide receiver.  According to ESPN, the Packers rank 17th in yards per game and 15th in rushing yards per game.  The offense is mediocre and has struggled to score points ranking 26th in points per game.

Meanwhile, the Tampa Bay Buccaneers rank dead last in rushing yards and 21st in total yards per game and 25th in points per game.  The two teams face similar struggles of difficulty moving the football and scoring touchdowns in the red zone.

As Rogers has lost the stability of a number one receiver in Davante Adams, Brady has lost similar stability in his offense.  2022 is the first season Tom Brady is playing without Rob Gronkowski and Julian Edelman, two of his most clutch receivers over the last decade.

This season, the two quarterbacks lack vital offensive threats.  Clutch receivers have helped Rogers and Brady convert on big plays.  Targets such as Adams and Gronkowski are more than talented players; they act as security blankets on big 3rd downs in tight games.

The Packers’ success and drafting have also limited Rogers, and the loss of Davante Adams has only magnified the issue.  In the last decade, The Packers’ front office has spent one first-round pick on an offensive player: Jordan Love, Rogers’ replacement, who has played eight games since being drafted.

Contrary to the Packers, the Buccaneers had built a wealth of talented receivers for Brady, and in 2020 the team won Brady’s seventh Super Bowl championship.  However, since 2020 the team has lost Gronkowski and Antonio Brown.  Chris Godwin has been injured most of the season, and the team can not run the football.  The team is one-dimensional, with Mike Evans being the only above-average receiver.

The Packers and Rogers are in a much better position long-term than the Buccaneers and Brady because the Packer’s defense is still good. If they focus on drafting weapons in next year’s draft, the team could be back to commanding the NFC North, but this Packers’ season seems nearly over at 3-5, and the Vikings at 6-1, winning the division would be a miracle.  Making a wild card spot will be just as tricky.

The long-term plan for the Buccaneers looks dire, considering Brady may retire at the end of the season, leaving the team without a quarterback. However, this season the team can make a run. Their division is weak, and Brady is an MVP quarterback. If the team’s receivers get healthy and Brady’s offense starts scoring more touchdowns, they can win the division and possibly make a run at another Super Bowl before Brady hangs up the number 12 jersey.