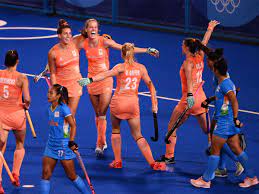 Felice Albers gave the Netherlands its first lead in the sixth minute. Whereas India skipper Rani Rampal evened out the advantage in the 10th minute. Skipper Rani scored India's only goal.

The Indians backed in the first two quarters to go into halftime, locked at 1-1. Goalkeeper Savita Punia leads it, but the break seemed to have broken their energy as the Dutch came out all guns blazing after the change of ends and elevated in three goals to snap any chance of a defeat in the bud.

The Indians, too, were showing a spark in the game and was surprising the opponent with the counterattacks.

If that was not enough, there was more misery in store for the Indians as Caia Jacqueline van Maasakker banged home from their sixth penalty corner in the 52nd minute.

The Netherlands took advantage of the six penalty corners as against India's none. After World No.1 Netherlands, the Indian women will play against Germany on July 26, then against Great Britain, Ireland and South Africa on July 28, July 30, July 31, respectively, in the group stages.

Rising Cases Of Suicide Among Students