An unfortunate update from San Francisco, as Jimmy Garoppolo will miss the remainder of the season after suffering a broken foot. The starting 49ers quarterback suffered the injury on the team's first possession of the game. Backup quarterback Brock Purdy replaced Garoppolo immediately after the injury. Despite the setback, the San Francisco 49ers were victorious over the Miami Dolphins with a final score of 33 to 17. The 49ers now have a record of eight wins and four losses.

The injury occurred on the 8th play of the possession when Miami Dolphin defenders Jerome Baker and Jaelan Phillips rushed to Garoppolo for a successful tackle. The two defensemen fell on top of the quarterback, breaking his left foot. After the play, he was able to walk back to the bench. He was visibly in pain and eventually stopped putting pressure on his foot.

Garoppolo was brought into the locker room by the team's medical staff for further tests on his injury. Garoppolo's return was initially listed as questionable. As time progressed, his status was downgraded to "out" for the rest of the game. Finally, the X-ray results revealed that Garoppolo's foot had unfortunately been broken. 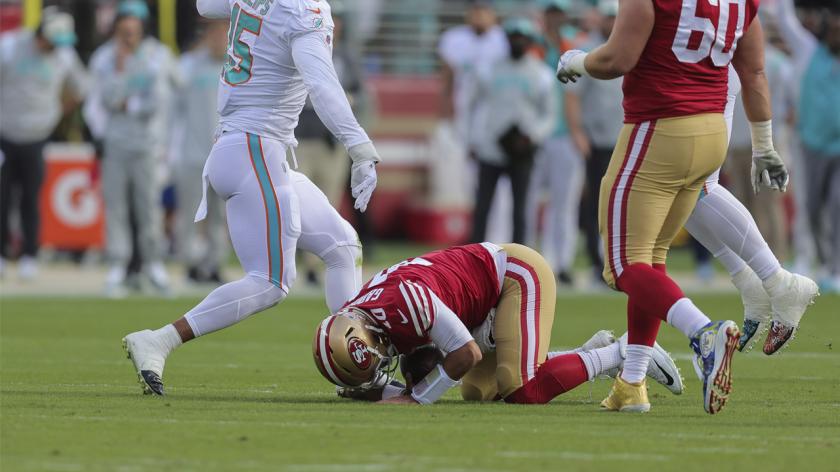 Garoppolo is pictured above in pain after the play that caused the injury. (Photo Credits To NBC News)

For the second time this season, a starting quarterback for the 49ers has sustained a season-ending injury. During the offseason, Trey Lance defeated Jimmy Garoppolo for the team's starting quarterback position. However, Lance suffered a season-ending injury with a right fibula fracture on September 18. The organization had no choice but to hand the position back to Garoppolo. Since the switch, the 49ers have won six games and lost only three.

Tensions between Garoppolo and the 49ers were high as he sought to leave the team before the start of the season. Soon after, both parties aimed to find a mutual solution.

He requested a trade from the team by the end of last season. However, no other franchise could find a suitable agreement with San Francisco. With no other options, the 31-year-old re-signed with the 49ers on a one-year $6.5 million contract. This new contract terminated his original 5-year, $137 million contract signed on February 8, 2018. At the end of this season, he will officially be a free agent.

Garoppolo and San Francisco were off to a roaring start together. The team put up many impressive performances as fans looked forward to a positive outcome for the season. Prior to his injury, Garoppolo put up impressive statistics. In the ten games he started, he threw for 16 touchdowns and 2,437 passing yards.

With the injury to Garoppolo, another change will transpire, as Brock Purdy will most likely lead the team. Purdy is in his first professional season in the National Football League. The 49ers have five games remaining this year and hope to continue their winning ways with a new quarterback taking the helm. In the meantime, we wish Garoppolo a speedy recovery.