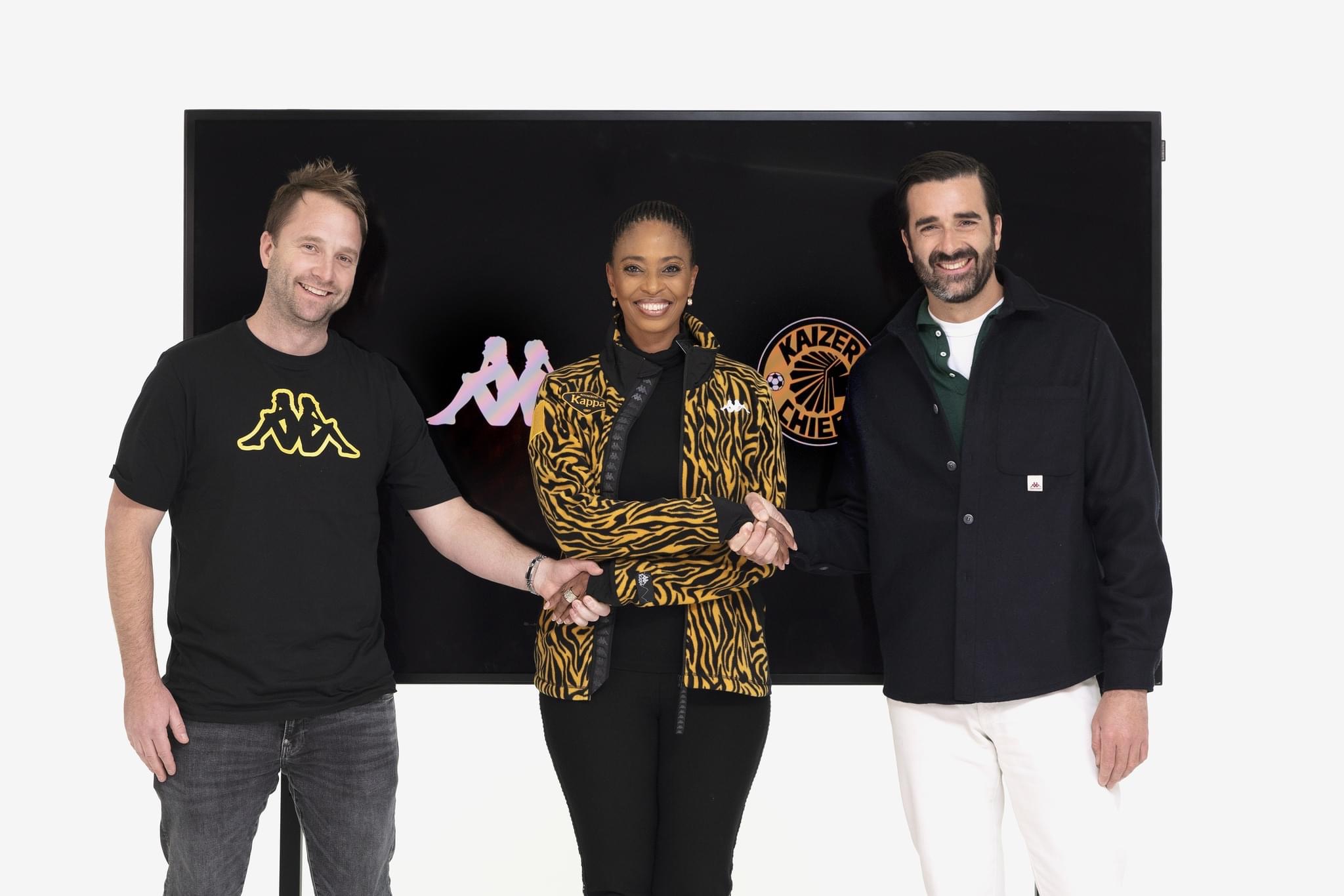 Kaizer Chiefs and Italian sportswear giants Kappa have reunited in a landmark agreement that sees Kappa become the Chiefs’ official technical sponsor and licensing partner from the 2023/24 season for an initial period of five years. The new partnership follows the parting of ways between the Chiefs and Nike at the end of the 2022/23 season after 23 years, which is the longest kit partnership in the Club’s history.

The agreement to reunite two leading names in football was signed in Italy yesterday, rekindling a relationship that fstarted in 1989 for seven glorious trophy-laden years and a memorable football fashion journey.

Kaizer Chiefs’ Marketing and Commercial Director Jessica Motaung mentions that the deal between the Kaizer Chiefs and Kappa is not only an acknowledgment of their past but also an exciting leap into the future for the club. The relationship between the Chiefs and Kappa began in 1989 when the Chiefs wore the chic Italian brand for the first time, and the partnership lasted until 1996.

“We are excited to team up with Kappa once again, a brand with which Kaizer Chiefs set new records and established itself as trendsetters in African football in the early 1990s. Kappa, like Kaizer Chiefs, is a unique brand of style and class and one of the key players in the global football kit space. Kappa have had great partnerships with some of the world’s leading football clubs, as well as a number of local teams over the years. This deal is not only an acknowledgment of our past but also an exciting leap into the future for the club,” said Jessica Motaung, who is in Italy to finalise and conclude the relationship.

“We believe that the reignited partnership with Kappa will introduce and bring about new technical product innovation and exciting designs for our teams and supporters. We are looking forward to this new journey with our long-time friends, Kappa, as they embark on reclaiming their position and dominance in the South African football and sports market,” concluded Motaung.

By the terms of the new agreement, Kappa will supply kits and accessory products to all Kaizer Chiefs’ teams, from the Kaizer Chiefs Youth Academy Development Team to the Senior Team. In addition, Kappa will have the right to manufacture and distribute Chiefs and Kappa branded merchandise and accessory products in South Africa, throughout Africa and across the globe.

Michael Joseph, CEO of Kappa South Africa said: “The signing of this partnership with Kaizer Chiefs has been a target of our company since we reignited the Kappa Brand in South Africa in 2010. This partnership is in perfect alignment with our ambition and continuous goals to continue to make Kappa the largest sports brand in Africa. We are thrilled to be once again partnering with a Club like Kaizer Chiefs whose passion and drive in all aspects, matches that of our brand. Not only are they an ambitious Club, with a strong identity and uniqueness of elegance and excellence, but their fans are their priority.”

He added: “Kappa together with Kaizer Chiefs, are going to reinstall the romance of the 90s and deliver something extraordinary to these fans. Our common glorious past must be a strength for the future of our partnership and we are really excited to unveil our products to the club’s players and supporters in the coming seasons. Our commitment to the Club is to deliver not only to itself but to its fans the most beautiful attire and product seen to date.”

Kaizer Chiefs will continue to wear Nike until the end of the current season. The partnership between the Soweto Giants and Nike is another that lasted for over 20 years.