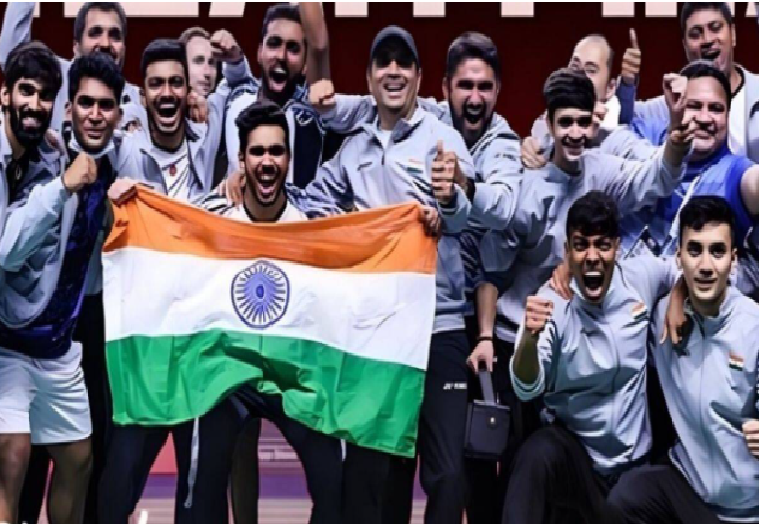 Brimming with confidence and faith, India took on 14 time winners and Cup royalty Indonesia in the final of Thomas cup in Bangkok and lifted the title defeating the defending champions by 3-0.This was India’s maiden victory, a well deserved one. It was not an easy journey:a slow and steady progress. Not only did the country enter semifinals of the team event for first time in 43 years, but they were also assured of their first ever medal in the 73 year old tournament.

Indian badminton fraternity had full trust on its bunch of excellently proficient singles and doubles players. They were indeed India’s most underrated yet talent oozing sportsmen. The men’s badminton players included Kidambi Srikant, Satwiksairaj Rankireddy, Chirag Shetty, Lakshya Sen and HSPrannoy. This bunch of 20 something year olds believed that this was their year

All of them showed memorable performances and achieved the desired feat winning every match in the finals.The men’s badminton team displayed remarkable team work and dexterity all through the tournament by defeating worthy opponents like Malaysia, Denmark; in road to the finals,Indonesia.It was an open secret that they knew for over a month: Indian men were going to clinch their maiden Thomas Cup.

A massive win: India’s first Thomas cup is a gold. A momentous day for the Indian badminton team that will be etched in the annals of our sport’s history. Entire nation is proud of the Indian badminton team for their impeccable grit and outstanding performance. A real inspiration for so many young Indians to pursue their passion, thereby, motivating many upcoming sportspersons.