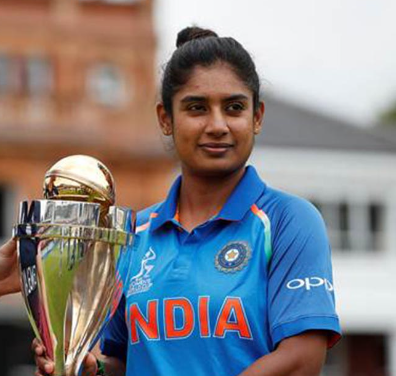 Mithali Raj was nicknamed as “The Lady Sachin Tendulkar of India”. This was a matter of respect and honor for the record setting all rounder. This was also a result of recognizing her exemplary consistency in parallels with Sachin Tendulkar. Wanting to be a Bharatnatyam dancer, ending up as a cricketer.  A simple little girl  wearing Blue with a dream to represent India to a mellow woman with dozens of badges of honor. Such a rollercoaster journey.

‘Women in blue’ came in limelight in the cricket crazy country only after Mithali led Indian women cricket team made to finals with England, eventually winning the series. Although young and inexperienced, they were self aware and managed to gather a supporting fanbase.  A 16 year old Mithali Raj had  made her ODI debut in 1999, scoring an unbeaten 144. Also called Lady Sachin, she at one point recorded the highest Test individual score in women’s cricket, making her stand akin to her male counterparts. The trailblazer ended her storied 23 year long  career with an overall tally of 10868 runs

Speaking of her volume of her potential as a batter,she deserves no less recognition than her male counterparts.  She deserves to be called as one among legends of the game. Honing the cap as the captain in 2004 for the Indian women’s cricket, she never looked back. Her leadership proved to be boon leading to India winning three Asia Cup titles between 2005 to 2008. Often complimented as captain cool, her legacy stands unmatched.  A career spanning over 23 years, she has been an inspiration to every young girl wanting to represent India.

From holding numerous records in international cricket to being recipient of several national and international awards, she has it all. Her awards include Arjuna Award, Padma Shri, Youth Sports Icon of Excellence Award, Vogue Sportsperson of the Year, BBC 100 Women, Wisden Leading Woman Cricketer in the World and Khel Ratna Award.

Often regarded as the best batter in Indian women Cricket, she took her fans by surprise when she announced her retirement from all forms of cricket. She justified her decision by terming it as ‘perfect time to draw curtains’ as the team is in hands of bright, talented and capable youngsters.