BeReal And Its Impact 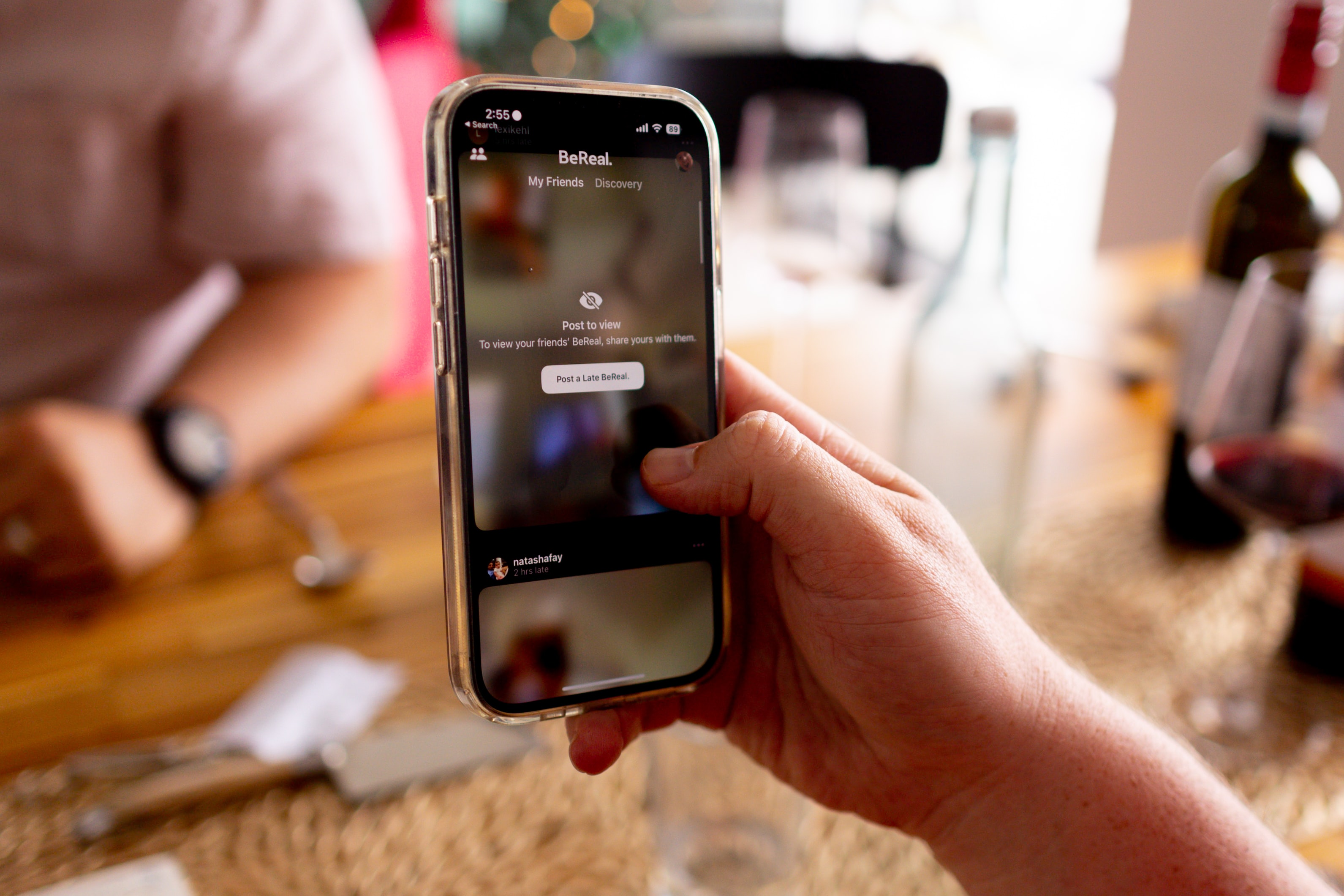 In recent trends, there has been an increase in new social media apps that are trying to bring something new to the competitive market of social media itself. One of these apps has been rising in popularity since mid-2022. This app is called BeReal and it has become a new trend among Gen-Z.

Currently, this app has been downloaded over 73 million times according to Business of Apps. It goes on to state that its current daily active users are around 20 million which is a major increase compared to April of last year when it was only under 3 million active users.

So, what is BeReal? It is a social media app that was made in France and follows a similar structure to Instagram. However, what makes this particular app stand out is that it does not have any filters the other apps have to make a photo more pretty and cover up anything the person doesn’t want others to see according to ZDNet.

Instead, the app focuses on the idea of having photos be more authentic as the name BeReal suggests. Once a day, the app sends a notification to the user that says “Time to BeReal” where the person has two minutes to take a selfie and a back photo of what they are currently up to. BeReal uses both the front and back cameras of one’s phone to get those photos together.

If the person does not post in time, then the app will label the photos to everyone that the photos were late. This indicates to your friends and strangers that the late photos don’t show who you are and what you do in your daily life.

The Leap explains further that BeReal also does not have the feature of followers but instead focuses solely on people sharing their genuine photos of themselves and their personal lives with friends. Not only does the app not have followers, it primarily focuses on people sharing among friends’ posts. While there is a way for strangers to see one’s photos on a feature called “discovery feed”, BeReal’s aim is for friends to connect more genuinely.

Adding on to its uniqueness, the app does not have a “like” feature but instead has what it calls “RealMoji”. This term by BeReal is a different way for friends to show them liking or disliking your photos by taking a photo of their faces to show their real reaction to the photos. This allows one to see what their friends’ “genuine” reactions are.

Parade adds that BeReal does delete the photos taken after 24 hours and the random time notification is set for everyone to receive at the same time for all users to connect more frequently. Users can still view past posts they made through a section called Memories which can be saved and shared publicly.

The app still allows comments and captions to be made under the photos for descriptions.

This new take on social media brings up the question of why it has grown in popularity despite the limitations BeReal has that many other social media apps don’t.

The answer to this lies in the impact it has on the demographics of BeReal users and its current setup.

The majority of BeReal users across the world are under the age of 25 as Insider Intelligence writes. These people from kids to young adults currently fall under the demographic of Generation Z. 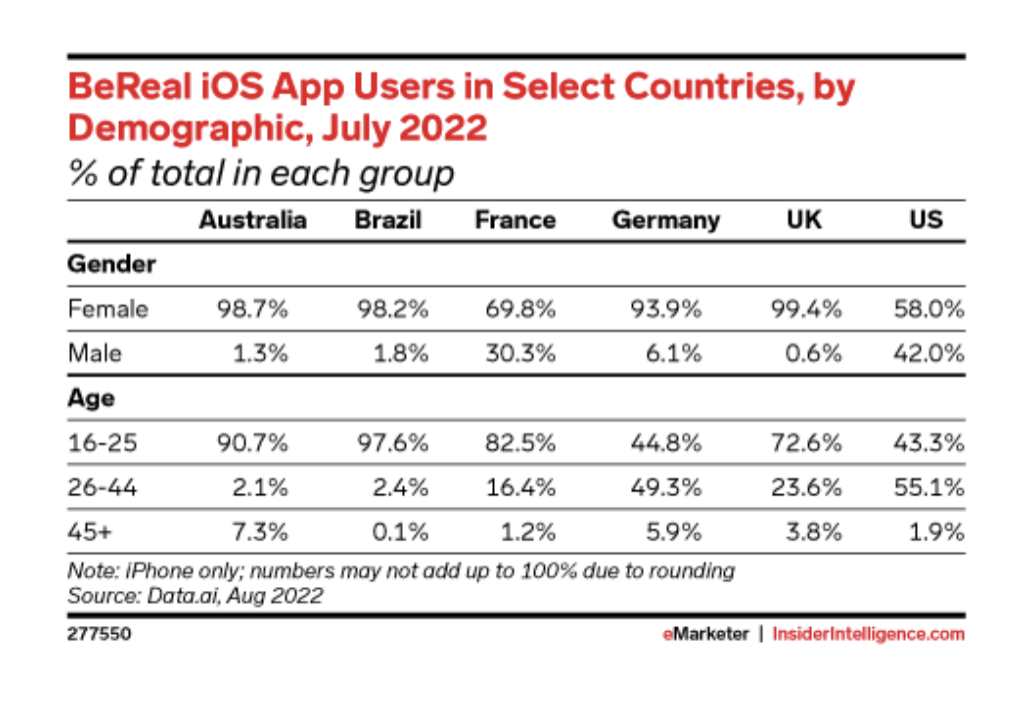 This particular generation holds up two main factors that can be attributed to BeReal’s rise in downloads and popularity.

Parallel Path first describes Generation Z as a generation that values authenticity over covered-up filters. In an age where information is much more accessible while also growing concerns over misinformation and fake news, Generation Z is more aware to look more deeply compared to previous generations.

“They want to see transparency in a company’s products and marketing. Because of their digital prowess,  they are not easily fooled by marketing schemes and are very capable of deciphering what is real and what is fake.”

BeReal fits with this desire for authenticity due to it having no filters and having the app set up to be a safe connection among friends. This unfiltered way of posting photos of your face and what you are currently up to allows one’s friends to see who you are.

Another trend that Parallel Path points out is that Gen Zers have a shorter attention span in comparison to earlier generations. The idea of getting any message or text straight to the point and doing so in a fast approach is what young people now expect.

BeReal does this due to its random timing where everyone takes photos within 2 minutes and has one look only at photos of friends and a quick scroll through its public feed. Since the majority of users do it at the same time, this allows for much quicker usage of the app and keeps the attention of Gen Zers.

“It’s probably no surprise, but the attention span of the average Gen Z consumer is only 8 seconds. This means it’s important to create content that “stops the scroll, gets to the point and delivers your message before they bail.”

BeReal’s future is unknown with an article from NYBreaking stating that experts predict it will not last this year. The reason for this is that it is a novelty that will fade in time and with the way social media is, this will begin to fall in terms of how many users will continue to use it daily in comparison to the big social media apps.

“Dr. Toogood thinks that our desire to show the best version of ourselves online will never go away, potentially preventing this app from hitting the big leagues. After all, Instagram was first marketed as an app that allowed you to transform digital images into a grainy Polaroid, rather than for airbrushed perfection.”

Others provide more optimism with BeReal having been the most downloaded social media app for 2022, this could be a sign of a transformation according to Mashable.

“So while BeReal's initial charm might be waning, it's transforming into something else entirely: a new form of journaling in the modern age.”