The biggest music streaming site in the world, Spotify, has released its ever-popular ‘Spotify Wrapped’ for 2022 on November 30th.

Considered a kind of annual event to some, Spotify Wrapped presents a cumulation of individuals listening habits on the platform. They are often presented with appealing, tidy graphics that make these statistics bite-sized and sharable to others. Even if this information is also often basic such as how many times someone listened to a specific song or just a list of songs they might have listened to.

In more recent years, including this year, 2022, Spotify has included more tools that have simple patterns for measuring listening data but expand on the way we understand why and how we listen to music. It has become questionable how and why their taste algorithms would need such a thing to begin with.

This year, Spotify has decided to assign listeners a listening personality based on the ever-so-popular MBTI test. Based on four metrics, Spotify used sixteen different ways to describe how you listen to music.

After those four metrics are put together (for example, ELTU) would then result in a musical personality type on your Spotify Wrapped. The name of the ELTU personality type used in the example would be ‘The Maverick’.

Some of the Personality Types from Wrapped are shown above.

The quaint inclusion of these personality types might overjoy frequent users of Spotify. Or they might feel that the application understands a dimension of their uniqueness. But could this also be seen as a glorified marketing gimmick? Or even a showcase of how eerily dedicated and sophisticated analytical ai is becoming? This brings up the question of what it is doing with your data.

At the very least, it is likely one which Spotify uses to keep user retention. User retention is described as “the continued use of a product, feature or app by your customers”. Spotify Wrapped itself is an excellent tool for what is called user or customer retention. It only appears once a year, often in late November or early December. Something like the promise of getting to view personalised infographics and, in this case, other tools, but only if the user has enough data provided over the year.

Spotify Wrapped has been so successful that other companies have begun replicating it on their platforms. Sites such as Youtube Music and Apple Music have created their own features in likeness to Spotify Wrapped.

Wrapped has also aided Spotify concerning marketing. Kimeko McCoy of Digiday has referred to Spotify Wrapped as Spotify’s “annual marketing moment” and referred to it being “one of the streaming platform’s biggest marketing campaigns of the year, is the gift that keeps on giving, both for users and Spotify’s marketing goals.”

All this can easily be tied back to the idea of Spotify Wrapped being used for user and customer retention. Especially considering most of the marketing for Wrapped occurs when it is already out. This means that new users observing others receive their Spotify Wrapped won’t be able to receive theirs until next year.

Then there are arguments about ai and metadata itself. Like many businesses, Spotify is continuously user data. For Spotify to create intense and interesting infographics, Spotify has to gather a lot of data. This doesn’t just include data concerning a user’s listening habits. But also age, location and gender. Spotify also makes assumptions about the user’s lifestyle, such as whether the user might be a parent. In the future, Spotify might also use its Spotify Wrapped personality types to recommend music or advertise to people in a specific way. It won’t be a surprise if many of the infographics that Spotify provides to users in Wrapped are also new tools the company uses to define listening habits as a whole.

Regardless of how Spotify harvests and uses data, it has also provided us with a lot of information regarding music listening and how genres are defined and created. Glenn Mcdonald created everynoiseatonce to track the emergence of new genres and the establishment of old genres. It is powered by Spotify data, such as uploads and playlists. The data which Spotify has a hand in collecting information on new music trends, ideas and concepts. Some of which may become invaluable to the music industry. 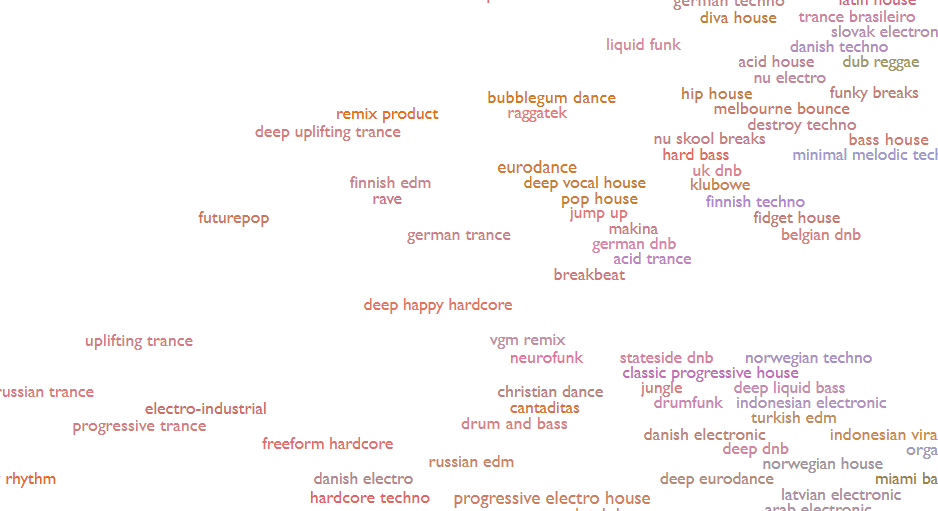 A sample of everynoiseatonce showing only a small sample of genres

Spotify Wrapped might be an annual event not only for music fans but for those in marketing; the music business and Spotify themselves also benefit greatly. For better or for worse.