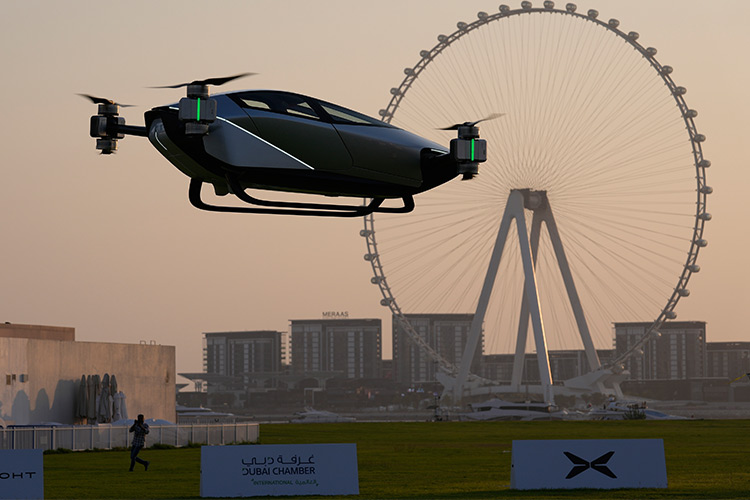 Imagining the future has always been impossible without the dream of flying cars. An idea that dates back to 1890 has now become true in 2022.

On Monday, Dubai and the world witnessed a historic moment in the future of travel when XPeng, a Chinese technology and electric manufacturer, took off its two-seater electric VTOL (vertical take-off and landing).

Designed by XPeng, the autonomous two-seater flying car has a 760 kg take-off weight with a maximum flight speed of 130km per/hour. It is the latest generation of flying cars equipped with an intelligent flight control system and autonomous flight abilities.

The eVTOL X2 flying car produces zero carbon emissions and is designed with low-altitude city capabilities. During the test flight, the uncrewed vehicle ascended to the height equivalent of a three-storied building, thus making it ideal for city trips.

During a media event, the head of aviation affairs at Aeroht, Dr. Liu Xinying, said, "During the first phase, these vehicles will be tested in regulated areas to reduce operational costs and risks.We aim to complete that within two to three years. The second phase will be commuting from point A to B.

The third will test the vehicles in urban mobility cities with door-to-door delivery, for example. Finally, we are working on the sixth generation of flying cars with autonomous flight planning. We have scheduled it to be mass-produced and delivered in 2024."

Dubai, A Global Innovation Leader and Hub for Future Technology

Influential personalities, including the Consul General of China in UAE, Acting President and CEO of Dubai Chambers, Vice Chairman and President of XPeng, and Deputy CEO of Dubai Industries and Export, attended the monumental event on Monday.

The test flight was conducted during the GITEX Global 2022, the largest tech show held at Dubai World Trade Center.

In recent years, Dubai has become a "magnet and testbed" for companies with advanced technology. "The decision to debut the X2 flying car in Dubai is a testament to Dubai's position as a global innovation leader and hub for future technology," said Hassan Al Hashemi, the Acting President and CEO of Dubai Chambers.

Mohammed Al Kamali, the Deputy CEO of Dubai Industries and Export, added that the government would continue to support companies that choose Dubai as their hub. "Opportunities are limitless here, and we work with different communities and agencies to make things work here," said Kamali.