A passenger plane carrying 43 people plunged into lake Victoria in Tanzania early morning on Sunday, where 19 people have been reported dead.

The state-owned Television Network Tanzania Broadcasting Corporation (TBC) has confirmed the number of deaths on Twitter. 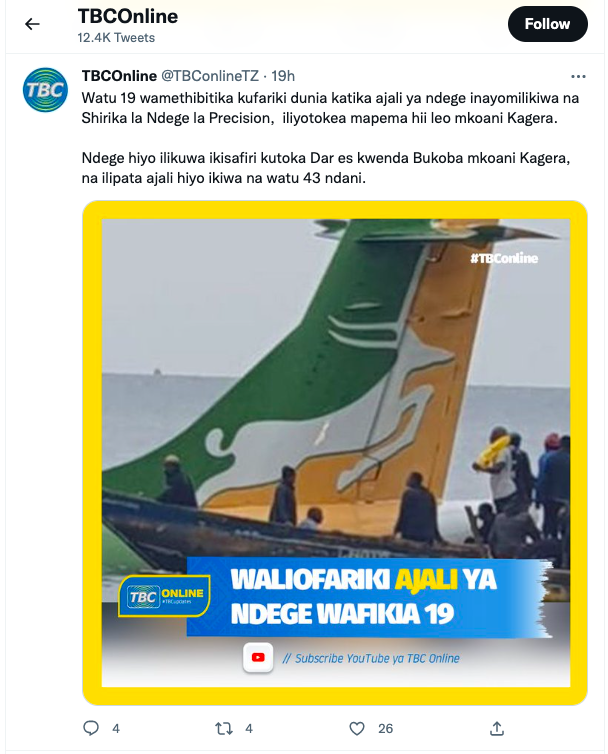 Prime Minister Kassim Majaliwa arrived at the referral hospital in the Kagera region and met the accident victims who are being treated there.

President of Tanzania Samia Suluhu Hassan took to Twitter and expressed her condolences to those affected by the accident.

She said: “Let’s continue to be calm while the rescue operation continues and ask Allah to help us.” 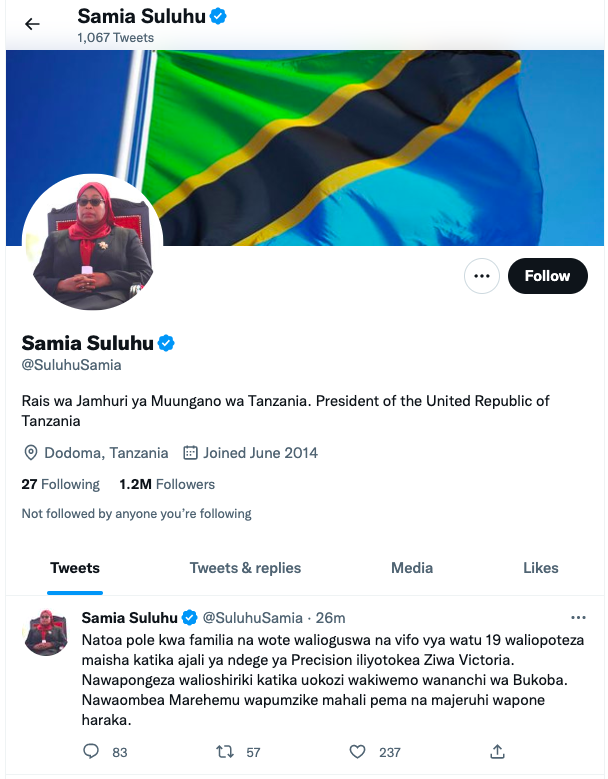 The Precision aircraft ATR42-500 was flying from Dar es Salaam to Bukoba with 43 people on board, 39 passengers, including an infant, and four crew members.

The video footage of the incident being broadcast on local media showed the plane was almost completely submerged in water, with only the tail fin visible above the water.

The rescue team and some fishermen waded through the water to protect people. Emergency workers tried to lift the aircraft out of the water using ropes and cranes.

The accident has been blamed on bad weather, and the rescue team has been working for the last seven-eight hours.

The regional commissioner Albert Chalamila had earlier said: “26 people had been successfully rescued and were receiving treatment in a referral hospital in Kagera region.”

Precision Air released statements confirming the accident and said: “A team of specially trained Precision Air personnel and TCAA are on their way to Bukabo to provide whatever support and assistance that may be required at the scene.”

Precision Air is the largest private airline in Tanzania, which Kenya Airways partly own, and was founded in 1993. It operates both domestic and regional flights as well as private charters to popular tourist destinations.

This is not the first fatal incident involving Kenya Airways. Earlier in 2007, a Kenya Airways flight from the Ivory Coast city of Abidjan to Kenya’s capital Nairobi crashed into a swamp after take-off, which killed all 114 passengers onboard.

In 2000, another Kenya Airways flight from Abidjan to Nairobi crashed into the Atlantic Ocean minutes after take-off, killing 169 people while ten people survived.