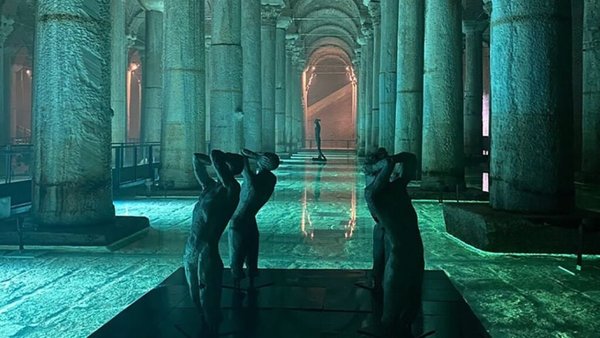 Basilica Cistern is one of the most popular places for tourists to visit in Istanbul. The 4-year restoration of the ancient cistern was completed and reopened on Sunday, July 24, 2022.

Basilica Cistern, set between Hagia Sophia, the 4th-century church built by Constantine I, and the Million Stone that marked the center of Constantinople, was built by Emperor Justinian I between the years 526 and 527 to sustain the water supply of the city through its connection to the water channel of Hadrian.

The structure used to have the capacity to hold 100.000 tons of water. Most of the 336 columns that make up the cistern had been composed of columns from older structures. There are Corinthian capitals from older buildings of the Byzantine city and an overturned Medusa head as the base for a column. The cistern had not been used as a part of the water supply since the conquest of Constantinople by the Ottomans.

Today Basilica Cistern can be accessed through the stone staircase of 52 steps, set in the southeast part of the structure. Other than being a museum, the space has also been used as a venue for various cultural events such as concerts.

This is the most extensive restoration of the 6th-century Byzantine structure, managed by the Culture Joint Stock Corporation (Kültür A, Ş.) of the Istanbul Municipality. The structure was kept open throughout the process carried out by Hera Restoration.

The construction of the entrance and exit were reorganized to accommodate the volume of tourists visiting the cistern throughout the year by adding extra space for them to wait without being affected by the environmental conditions.

Another focus of the restoration was related to the leaks from the ceiling, especially during rainy weather, which endangered the visits of tourists as well as negatively impacted the conservation's sustainability. The proper insulation was applied to address this problem. Also, the reinforced concrete floor was removed, and it was replaced with a new platform for visitors.

According to an inspection in 2020, the collar beams of the columns were found to be in very poor condition. During the restoration works, it was discovered that the collar beams were not continuously attached and were placed only until the capital of the columns. If not addressed, this structure situation could have caused serious collapses in the case of an earthquake.

The 4th-century Million Stone, which was used to mark the beginning of the ancient Roman roads, and the 16th-century water gage in the park right next to the Basilica Cistern were also a part of the restoration project.

The Basilica Cistern reopened its doors to visitors with a special themed exhibition and a concert by Turkish musician Mercan Dede.

A 7.8 Earthquake Struck Central Turkey And Affected 10 Other Countries

The Big Bench Theory: A Bench To Feel Children Again