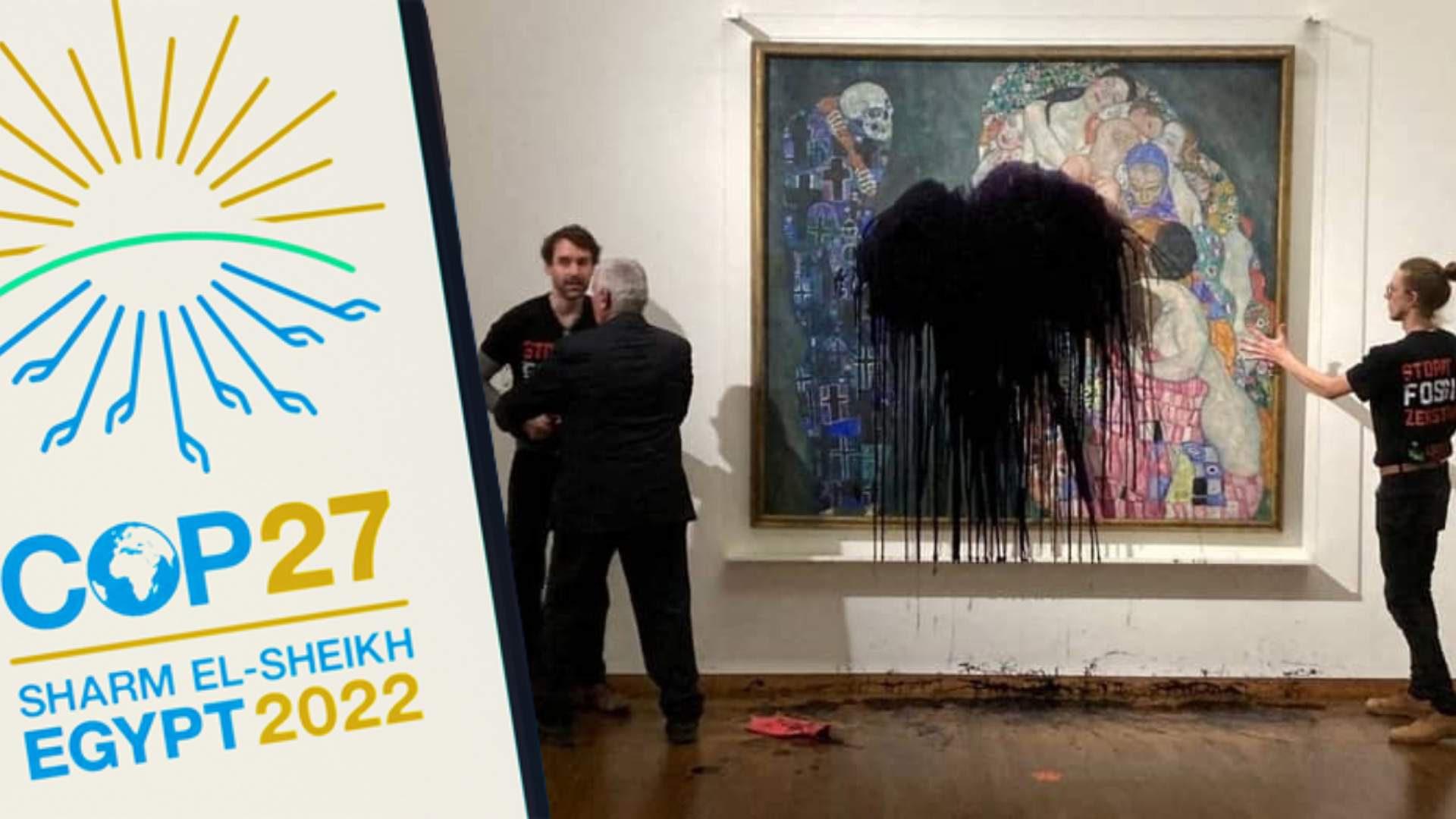 COP27 took place because it wanted to globally bring countries and governments together to work on the climate crisis faced largely by the people. While the purpose of COP27 was to get a change positively and execute plans that don’t involve vandalism, climate activists have taken the plunge. They throw tomato soup or black oil on the historically preserved art of the countries where famous art resides.

Recently in November of 2022, Austria also came into the list of vandalism countries where the protestors attacked the infamous painting of Gustav Klimt in Vienna.

The incident occurred at the Leopold Museum in Austria, where the protestors attacked the painting with a black oily liquid. The work of art that was attacked was made in 1915 and was preserved at the museum. The protesters stated that the attack was necessary because the government didn’t pay attention to the fossil energies being used.

The painting was called ‘Death and Life.’ The two protestors were caught. While the security guard pushed one away from the artwork, the other glued his hand to the wall as a sign of ongoing protest. While the artwork survived, the necessary damage was done to the wall, security framing and the glass of the painting, and the floor.

The activist group, Last Generation in Austria stated that the problem of fossil fuel has been going on for about fifty years, and we haven't done anything to protect the earth or fix the climate changes. He also stated that the solutions are with us. He gave the example that driving below 100 km/h on the highway will save 460m tons of CO2 annually just in Austria. It will also protect Austria from climate disasters, have safer roads and travel, and have less air pollution.

Last Generation also tweeted, "oil and gas drilling is a death sentence to the society." The activist group adds more by saying that the climate crisis has been in the last 50 years, and no measurements have been taken correctly. Phoebe Plummer says that the climate crisis won't be taken seriously as long as it won't be a political will. The last Generation says that strict action is necessary or the planet will be unlivable for coming generations. One problematic aspect is fossil fuel destruction leading the earth to climatic hell.

The museological director of Leopold’s Museum, Hans Wipplinger, told the conference that he was shocked that this museum will also come under the attack of climate activists. Wipplinger added that he emphasizes the climate activists, but their ways are unacceptable, and they must pay for the damage they have done.

While it is unsure if the protestors were arrested, the recent attacks on the artwork of famous painters such as Vincent Van Gogh, Dutch painter Johannes Vermeer, and Renaissance painter Sandra Botticelli were attacked. Fortunately, the painting was saved, but the activism is taking a good toll on the security guards of the museums who fear such attacks.

Phoebe Plummer, who threw tomato soup at the painting of Gogh, stated that art is not essential as life as food as justice. The museum and art officials then released a statement counterarguing how throwing tomato soup or any sticky, oily liquid will combat climate crises. Plummer reported having a cleaner and better environment for future generations. Plummer, who goes with the pronouns them/they, stated that the reason behind doing this was to be known as a climate activist who fought for a good cause and a clean future.

The activists stated that they are taking the rebellious way because they want their government to take quick actions to tackle critical climate issues. In accordance with climate change, recent floods, wildfires, and damage to the natural resources and ecosystem has made the protestors seek government attention by spilling items on famous artwork. Their motto is to decide whether life or art is essential for them, which has been the same motto for everyone.

While the governments of countries under climate activism showed their concern but also objected to the ways employed for protesting, the activists were vocal when they put their problems, such as questioning whether life is essential or preserving the art. It is important to pay attention to the degrading climate health and implement ways on an individual level to help improve the climate.

Climate Crisis In Pakistan With The Recent Floods