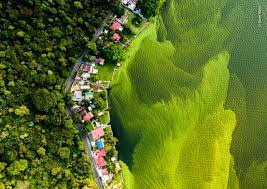 Photographer Daniel Núñez, with his photograph The Dying Lake, won The Wildlife Photographer of the Year in the category Wetlands - The Bigger Picture. His image illuminated the immense algal growth on Lake Amtitlán in Central America, Guatemala.

The competition recognizes the best nature photography, and has done so every year since 1965. The judges emphasise the importance of images, as the Natural History Museum highlights: “…Images can be powerful through their impact or beauty or illustrate an environmental or conservation story that reveals the importance of wetlands for nature and/or for people”.

Daniel Núñez’s photograph of the algal was taken by a drone. “It was a sunny day with perfect conditions,' Daniel observed, 'but it is a sad and shocking moment”. Every year, around 75,000 tonnes of waste goes into the lake.

The contrast between the algal on Lake Amatitlán and the forest showed the increasing concentration of the persistent cyanobacteria algal, which has flourished as a consequence of pollution. Thus, the proliferation and contamination indicate that humans’ practice of deforestation has had an intense impact upon water quality, with growing toxins in the lake.

Núñez was motivated by his work as a Guatemalan Biologist and his passion for photography, as he states: “The purpose of wildlife photography is not just to get a photo, it is to get more. It is to be able to achieve a message that is transmitted to promote conservation and information about nature. I consider that it is a tool that is rarely valued as it should be”.

His job contributes to science, art, and research. Like him, many other participants have been telling a story about our planet, with a variety of photographs including those depicting animals in their habitat. They are not photojournalists, but play a crucial role in fostering a link between nature and people.

The competition’s judge said: “What really makes this image work is the element of surprise. At first glance, the right-hand side of the image looks like a grassy field. But when you realize that it's water, you immediately understand that something is sorely wrong with this picture - it's a damaged ecosystem, and something must be done to fix it”.

Where you can view the image? In the city of London, the exhibition of the competition - featuring 100 powerful photos - is displayed at the gallery in the Natural History Museum from 14 October 22  to 2 July 2023. It is hoped that the images will boost understanding of the importance of recovering our damaged ecosystem and embracing biodiversity, and generally inspire and educate their audience.