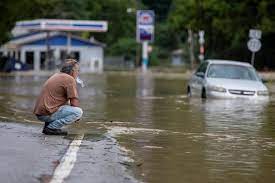 On the evening of Wednesday July 27th, East Kentucky was devastated by severe storms causing flooding, landslides, and mudslides. The following day, Kentuckian governor Andy Beshear declared a state of emergency for what he described as “one of the worst, most devastating flooding events in Kentucky’s history”.

Since then, Beshear has been continuously updating the public via Twitter. Last night, he shared a document that, among other things, indicates that the death toll is continually rising, and is now at 37 deaths, at least six of whom are children while hundreds remain unaccounted for. Each victim’s funeral is to be paid for by the Team Eastern Kentucky Flood Relief Fund, an initiative that he encourages able citizens to donate to.

So far, at least 1,432 Kentuckians were rescued by first responders from Kentucky, Tennessee, and West Virginia. Emergency housing is being provided for victims of the disaster as rescuers continue their search for survivors, and more than 12,000 households are still without power.

Beshear ordered federal aid to be provided for the recovering region. American President Joe Biden approved the request in the Disaster Declaration, released on July 29th. It is expected that millions of dollars will be required to repair damages to infrastructure including roadworks and bridges.

Kentucky, a south-eastern US state, has faced economic turmoil in the wake of its declining coal industry, upon which the state was formerly heavily dependent. Kentucky now ranks as one of the worst economies in the US, and therefore has been hit particularly hard by this natural disaster, which has only raised its poverty levels. Many struggling citizens will require financial aid to rebuild homes that were lost in the flood.

It is unsurprising that scientists have attributed the cause of this natural disaster as another unmistakeable consequence of climate change. The disaster is but one in a summer tortured by droughts, wildfires, and extreme heat on an unprecedented international scale.