Denis Goldberg: the only white anti-apartheid activist of the Rivonia Trial 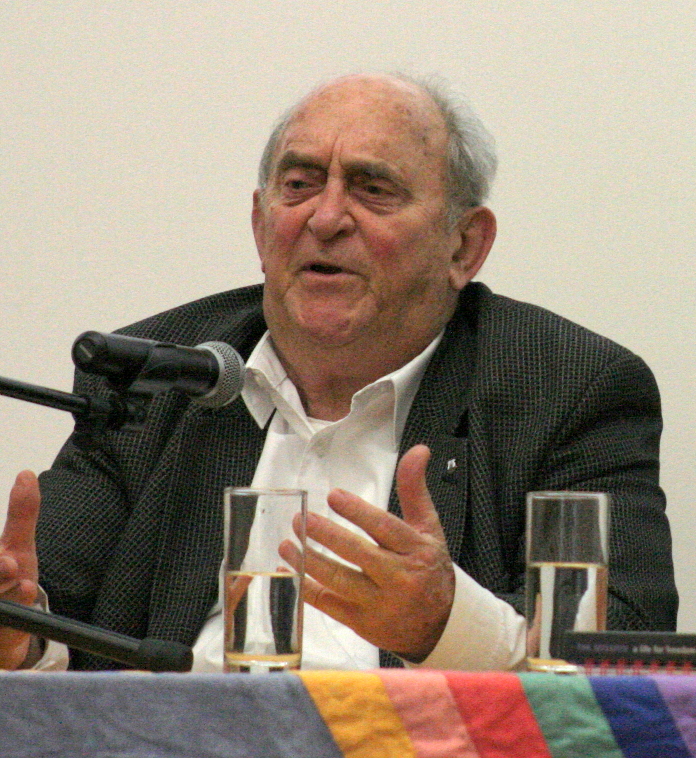 Denis Theodore Goldberg (1933-2020) was No. 3 accused in the Rivonia Trial, alongside nine others including Nelson Mandela, Walter Sisulu and Govan Mbeki. He was the only white man sentenced, and also the youngest, aged just 31, and is now one of the less well-known defendants. Apartheid was the name given to a legalised form of racism, in which white people were privileged above all others. Only white people were allowed to vote until the first democratic elections in 1994.

Goldberg was born into a Cape Town household that welcomes people of all races. At the age of 11, he asked his English-born parents why his history book said South Africa was a democracy when black people couldn’t vote. They explained the nature of apartheid, and he later said that ‘once you tear away the veil of lies around a society, you can’t put it back together unless you lie to yourself every day’. Goldberg studied engineering at the University of Cape Town, where he was shunned for his political beliefs and later fired from jobs. He met his wife, Esme Bodenstein, a fellow activist, through the non-racially segregated Modern Youth Society. He wanted his children, and grandchildren, to be free to pick their friends regardless of their colour. By 1957, Goldberg had joined the Communist party (which had been banned in 1950) and the Congress of Democrats, an affiliate of the African National Congress (ANC) for white opponents of apartheid. Despite these activities being legal, Goldberg and his wife were constantly harassed by the Security Police, who were building up case files of those involved.

Following the Sharpeville Massacre on 21 March 1960, Goldberg, alongside his mother, was arrested and imprisoned for four months without trial, for supporting township strikers. The massacre occurred at the police station of Sharpeville when a crowd of 7,000 protesters went there after demonstrating against pass laws, designed to segregate the population, manage urbanisation and allocate migrant labour, and severely restricted the movements of citizens and others by confining them to designated areas. The South African Police (SAP) opened fire on the crowd when they advanced toward the station fence. Overall, 69 people were killed (many shot in the back as they ran away) and 180 injured, including 29 children. Today, the anniversary of this event is memorialised as a public holiday in honour of human rights.

In 1961, Goldberg became a technical officer of Umkhonto we Sizwe (‘Spear of the Nation’, or MK), the armed wing of the ANC when the government turned to increasingly violent methods to suppress protesters. The wing aimed to act only against hard targets such as power masts and avoid any injury or loss of life. Goldberg’s involvement in the organised training camp at Mamre, outside Cape Town, formed part of the evidence against him at the Rivonia trial. In 1963, when the 90-Day Detention Law was passed by the government, in which a person could be detained without being charged or allowed access to a lawyer.

On 11 July 1963, Liliesleaf farmhouse in Rivonia (Johannesburg), which had been used as the secret meeting place for about two years, was raided by the security police. Goldberg was arrested alongside Sisulu, Mbeki, Raymond Mhalaba and Rusty Bernstein. Goldberg was laid open to aggressive interrogations, threats of hanging, as well as being offered inducements to turn state witness in exchange for sentence leniency. His wife Esme had also been arrested and was being held under the 90-Dau Detention Law. She too was treated harshly and subjected to threats, including having her children taken away. On 8 October, the accused men were charged with offences under the Sabotage Act. The trial became known as the Rivonia Trial.

The accused were informed by their lawyers that they would get hung. Goldberg, in an attempt to protect Mandela and the others, offered to take responsibility by saying that he had gone beyond his weapon manufacture instructions, arguing that the evidence against him was the most difficult to disprove as the plans had been written by him. This offer was dismissed by the others. He also asserted that Esme and his children go into exile, which they did in December 1963 when they left for Britain. Her house in north London provided a shelter for many South African political refugees. An escape plan was discussed and two of the accused managed to escape, but Goldberg was unsuccessful. The verdict was delivered on 12 June 1964: Bernstein was acquitted and Bob Hepple was discharged; the rest were all found guilty. They did not receive the death sentence, instead, eight were sentenced to four terms of life imprisonment each.

None of the men appealed their sentences. While the others were sent to Robben Island, a Maximum-Security Prison about seven kilometres off the coast of Cape Town, Goldberg was sent to the Whites section of Pretoria Central Prison, in keeping with the regime's philosophy that the different races should not mix. He, therefore, had the added struggle of being isolated from his comrades. He was alone in his cell for 16-18 hours a day, conversing with other inmates was forbidden and the conditions were so harsh that it often resulted in psychological stress and illness. After four years, Esme was allowed to visit for the first time, and then again after another four years, but never again after that, with no reason given. His children were allowed to visit after eight years and were allowed physical contact until the age of 16. One 500-word letter was permitted every six months, but these were harshly censored and cut. Both his parents had died whilst he was imprisoned. On the day before he was released, Goldberg was allowed, under supervision, to visit his father’s grave.

In 1977, Goldberg, who had been studying law, brought a case against the Minister of Prisons and Commissioner of Prisons, asking to be entitled to receive newspapers, arguing that this was a deprivation of news, harsher treatment than other inmates and additional punishment to loss of liberty. The case was taken on appeal to the Supreme Court of Appeal. In September 1980, it was decided that Goldberg could receive newspapers (subject to behaviour and their grade in the prison system) 16 years after being sentenced. In 1979, an escape attempt was planned, but Goldberg, who realised that it would threaten the movement as it would result in suppression by authorities, wrote coded letters to his comrades in the ANC. Goldberg decided not to escape, while Tim Jenkin, Stephen Lee and Alex Mourmbaris successfully escaped to neighbouring countries with Goldberg distracting the warden.

In 1985 there was a tide of change. Goldberg’s daughter Hilary had set up a committee to try to obtain her father’s release. Herut Lapid, who campaigned for the release of Jewish prisoners around the world, became involved and started lobbying political contacts in Britain. Those of Robben Island approved of these initiatives. Alongside this, political developments were also underway: under pressure from the US, the government offered to release political prisoners if they renounced violence. Goldberg agreed not to be a soldier anymore, but he did not repudiate his earlier involvement or the need for an armed struggle. When South Africa’s president, P.W. Botha, met Margaret Thatcher in 1985 a letter pleading Goldberg’s case was delivered to him by the British foreign secretary. Shortly afterwards, on 28 February 1985, Goldberg was released, after serving 22 years in prison.

Goldberg was immediately flown to Israel where he was reunited with his family. He then went into exile in London and resumed his work in the ANC at its office there. On 26 June 1985, on the 30th anniversary of the Congress of the People (also known as ‘Freedom Day’), Goldberg had a speech at Trafalgar Square at an Anti-Apartheid Movement (AAM) rally. He also represented the AAM at the Anti-Apartheid Committee of the United Nations. Until 1994, he built up support for the movement, travelling across Europe and North America.

When Mandela was inaugurated as president in the first non-racial elections in South Africa in 1994, Goldberg decided not to return to South Africa and stayed in the UK with his family. He founded the development organisation Community HEART in London in 1995, to help improve black South Africans' living standards. The organisation raised funds for organisations such as Rape Crisis Cape Town and for initiatives to provide schools with books and computers.

In 2002, Goldberg returned to South Africa and was appointed Special Adviser to Ronnie Kasrils MP, Minister of Water Affairs and Forestry until 2004. He then served as Special Adviser to Buyelwa Sonjica, Kasrils’ successor. He continued to travel around the world to speak about South Africa and the need to change it. For example, in 2009 he presented a paper titled South Africa, the Transition to Democracy and the Banning of Torture at a seminar at the University of Düsseldorf. In 2010 he published his autobiography, The Mission: A Life for Freedom in South Africa. He also joined many struggle veterans in 2016 in criticising the corruption within the ANC, arguing that its leaders needed to be replaced.

In 2015, Goldberg helped establish the non-profit Denis Goldberg Legacy Foundation Trust, with its focus being the founding of an arts, cultural and educational centre, to be known as the Denis Goldberg House of Hope. Speaking in 2018, Goldberg declared his belief in the role of art and culture to promote change and that South Africa was still badly divided and that young people needed ‘to sing together, dance together, make poetry together’.

In April 2020 Goldberg died after being diagnosed with lung cancer in 2017. He was one of the last two surviving Rivonia Trialists, the last of whom, Andrew Mlangeni, died in July of the same year. South African President Cyril Ramaphosa declared that Goldberg ‘dedicated his life to achieving the better life we enjoy today and his revolutionary contribution reinforced the non-racial character of our struggle and of our democratic dispensation’. He put the South African peoples’ freedom over his own. Reflecting on his activism, he said: ‘Freedom is more important than your own life’.