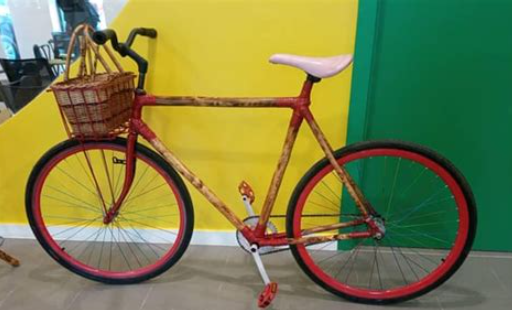 Years from now, everybody will remember the pandemic lockdowns in different ways. Some picked up new hobbies; others could focus more on the ones they already had. Anything helped distract us from what was happening in the world. Grace Mabika, a 33-year-old woman from Gabon, decided to pursue her passion project during the pandemic. The company she co-founded, Bamga Bicycles, is changing Gabon one bike at a time.

The enterprise aims to empower the local community by creating more jobs and offering a product accessible to all. Their bamboo bikes are produced with local materials and distributed at a reasonable price so that the entire population can benefit from them. In particular, Mabika is interested in increasing the number of women involved, both as employees and customers.

Mabika, a teacher, first came up with the idea of producing bicycles after seeing her students struggling with walking to school. Some traveled on foot for considerable distances, eventually hindering their learning and making their home tasks harder. The teacher stated: “It pained me to know that my students had to walk for so long. For women, it’s even worse because when they get home, they have to cook – it’s exhausting.”

When she put her idea into practice, she was a hotel manager. She witnessed many of her colleagues losing their jobs due to the pandemic. She hired these people to work with her on this new project. The former hotel staff was first employed in cutting down bamboo to produce the first bicycle, a kid’s tricycle, sponsored by friends and family that believed in Mabika’s idea. With time, production is growing and shifting to meet the country's demand.

More than two thousand orders came from the town of Mouila, where Mabika lives, and where the factory is located. An outdoor company from Gabon that has shops across the country ordered a further three thousand bikes to distribute everywhere in the nation. The goal for the company now is to reduce the cost of their bikes to make them more affordable to the general public. This is especially important for Mabika since she notices that many bikes now in circulation in Gabon are targeted toward men. Their bamboo bikes instead are made smaller, hoping to encourage women to take up cycling. “If we can get just 5% more women riding bikes”, she said, “I would be thrilled.”

Bamga Bicycles is but one example of the importance of empowering local communities to improve life with their own resources. It is a little-known fact that Gabon is rich in bamboo, but it can already be seen how a simple idea like a bike can change many lives for the better. The company has already created jobs and empowered the community, especially women. The long-term goal is to eventually highlight that Africa can be a source of good quality bamboo, enabling it to take a share of the worldwide market.