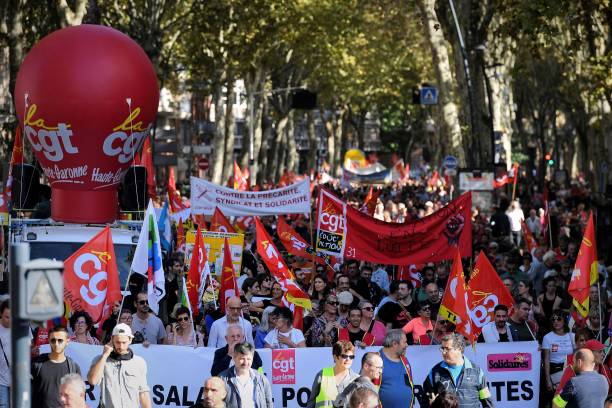 Thursday, January 19 was a nationwide strike day in France. Around 1.12 million people took to the streets all over France, including 80 000 in Paris, to show their disagreement with the pension reform of the French President, Emmanuel Macron. However, the General Confederation of Labour said that over 2 million people took to the streets, including 400 000 in Paris. The French government wants, in particular, to raise the retirement age from 62 to 64 years old.

Now in Barcelona, Spain, to sign a “friendship and cooperation treaty” to strengthen the France and Spain relationship, the French President said: “We will do it [the pension reform] with respect, in a spirit of dialogue but also determination and responsibility.” However, French protesters’ leaders announced a new nationwide strike day on Tuesday, January 31. Furthermore, in a radio interview, the French Minister of Labour, Employment, and Economic Inclusion, Olivier Dussopt said: “It is an important mobilization […] we must continue to convince and we must listen to the messages in the processions.” He added: “Retirement is a particular subject, in France more than anywhere else. This refers to a form of intimacy.”

During those mostly peaceful protests all over France, some people threw projectiles that resulted in the use of tear gas by the police. Furthermore, Paris Police Prefecture announced that 44 protestors are in custody for carrying prohibited arms, contempt, rebellion, and throwing projectiles.

French Prime Minister, Elisabeth Borne reacted to the demonstrations on Twitter: “I salute the police commitment, like the trade unions, which enabled the demonstrations to take place in good conditions. Allowing opinions to be expressed is essential for democracy. Let's continue to debate and convince.” Moreover, on the same note, the French Interior Minister, Gerald Darmanin wrote: “Protesting is a fundamental right. It is the honor of the police and the gendarmes to have allowed everywhere in France that this right is exercised in the best conditions.”

During one day, most of the left-wing political parties from the ecologist to the far-left one were united as one against Macron’s government. The far-left party “Nupes” president, Jean-Luc Mélenchon qualified those demonstrations as a “lost battle for the government” since it couldn’t convince the people with this pension reform, according to Mélenchon.

Finally, the French Democratic Confederation of Labour chose the date of Tuesday, January 31 for the next nationwide strike to allow trade union organizations to get ready and to be able to have even more people in the streets. Furthermore, some trade unions asked for local demonstrations on Monday, January 23.