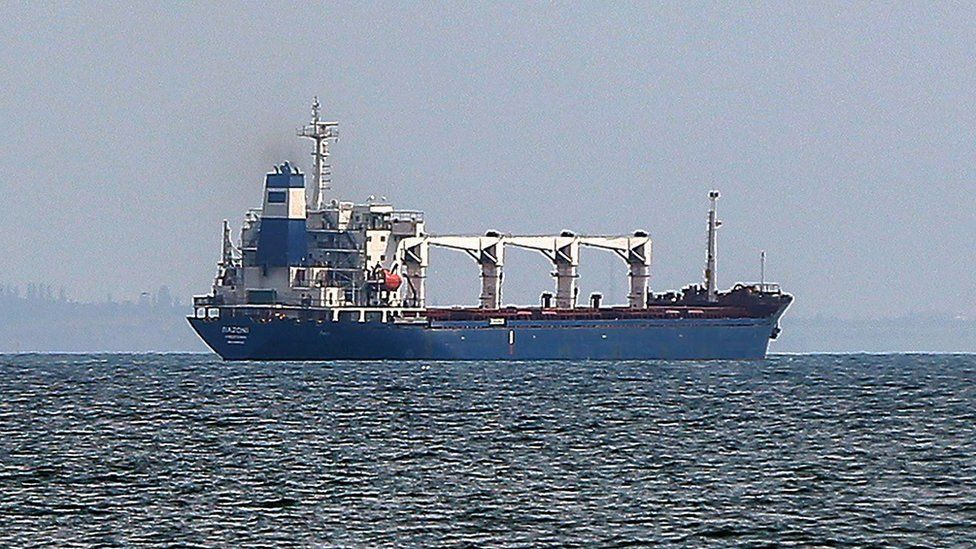 After weeks of negotiations brokered by Turkey and the United Nations, Ukraine’s first grain ship, The Razoni, sails for Lebanon at the Odessa port in Ukraine. The European Union describes the move as a welcome first step towards mitigating the global food crisis enhanced by the Russia-Ukraine crisis.

The Sierra Leone-flagged bulk carrier transporting 26,000 tonnes of corn is the first vessel to leave Odessa since Russia invaded Ukraine’s borders in February. It was to depart on Monday and arrive at the Black Sea by Tuesday to undergo checks from Ankara border security, officials from Russia, Ukraine, and the UN at the Joint Coordination Center in Istanbul.

However, early problems at sea resulted in a 24 hours delay. The Razoni crew is to arrive at the Black sea in Istanbul today before departure into world markets- executing the Black Sea grain initiative that aims to export commercial foodstuffs and fertilizers from Ukrainian ports safely. The journey to Lebanon is forecast to last for a week.

According to the Ukrainian government, the Razoni is just one of 17 ships awaiting departure from Odessa and two other ports. The agreement allows for one Ukrainian ship to sail per day. The Joint Coordination Center sees to its implementation.

Ukraine Foreign Minister Dmytro Kuleba called the deal a “relief” for large importers of Ukraine grain in the Middle East and Asia. However, UN spokesperson Stephane Dujarric said that the body hopes that “there will be some outbound movement” in the deal that he describes as “delicate, complex and complicated.”

The EU said it expects the entire agreement to reach a complete execution as soon as possible to quickly implement action plans against the food crisis “enhanced by Russia’s illegitimate aggression and blockage of Ukrainian ports in addition to mining and destroying the fields in Ukraine. It says, “The negative consequences of Russia’s aggression against Ukraine and blocking the ports are affecting the most vulnerable people in Africa, Asia, and the Middle East.”

“We hope that all the agreements will be fulfilled from all sides and the mechanism will work effectively,” Dmitry Peskov, Press Secretary to Vladimir Putin, told Russian Press.

Russia and Ukraine constitute about a third of global wheat exports, halted by Russia’s blockade as global food prices soared. The grain transporting Razoni makes a first market stop at Lebanon, one of Ukraine’s primary sources of import, and currently experiencing economic setbacks. Ukraine hopes to reach maximum capacity in weeks as it mobilizes new vessels to transport more grains to other parts of the world where food scarcity rampages.

"We expect that a responsible implementation of the measures envisaged by the documents will become a practical contribution to resolving the problems of global food security," said Russian Defense Minister Sergei Shoigu.

Almost 40 hours after its departure, the first bulk carrier anchored near the Bosphorus entrance from the Black Sea, awaiting official authorization, Reuters reports.