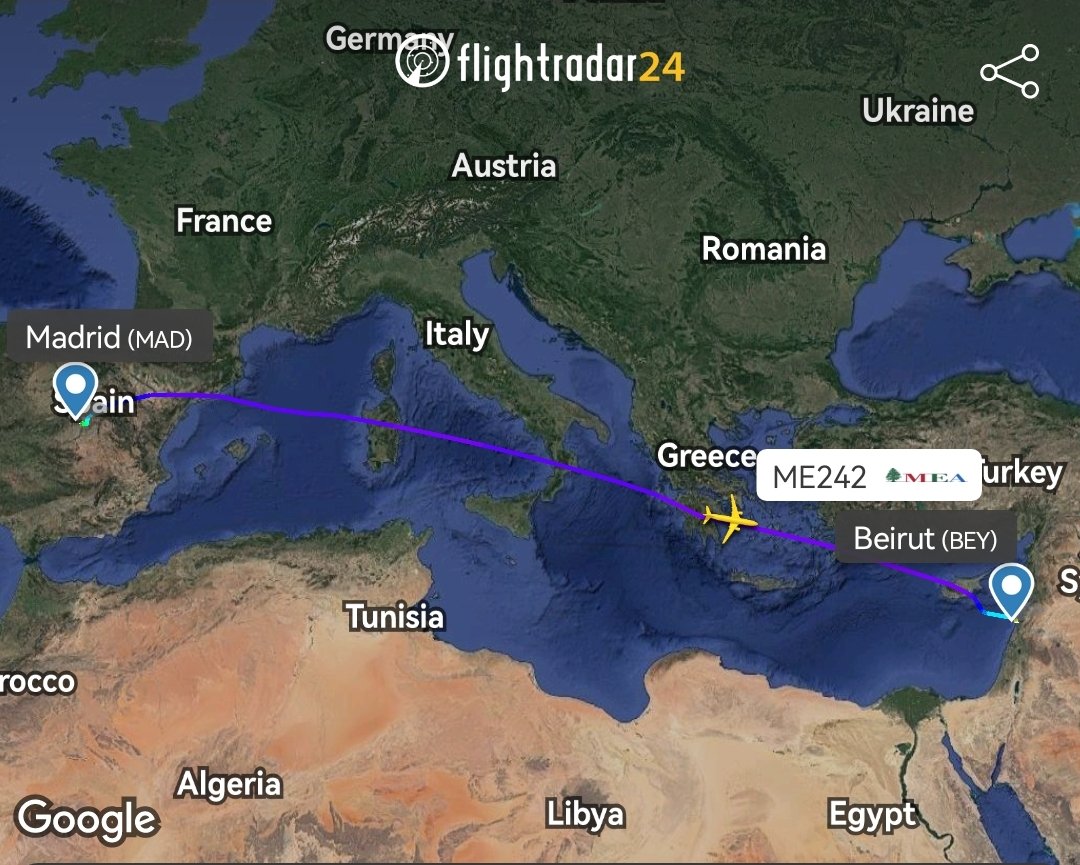 A Lebanese commercial airplane, carrying 145 passengers, was intercepted by two Greek F-16 fighter jets during a flight from Madrid to Beirut on August 10 , over suspicions of hijacking.

According to IntelSky, a Lebanese Aircraft tracker on Twitter, the Middle East Airlines’ Airbus A321 appeared to be non-responsive, where a “Code Renegade set Greek authorities on alert following a relevant signal by the NATO air control center in Spain (CAOC Torrejón), to intercept a non-responsive civil aircraft.”

Code Renegade is usually an alert used to warn of airplane hijack emergencies.

IntelSky also added that “there were reportedly several attempts to contact the aircraft but no response had been received over the radio, something that was particularly worrying.”

The two Greek fighter jets took off from Souda and intercepted the aircraft in Argolida, north-eastern Peloponnese.

“They re-established contact with the pilot and determined that there were no problems,” said the news website Greek City Times.

Abed Alhout, the pilot and also the son of the Chairman of the Board of Directors of the Middle East Airlines Mohammad Alhout, is said to have forgotten to turn on the correct frequency of the instruments, resulting in the inability of the NATO control center to contact Alhout.

Residents of the Argos reported noticing the incident and hearing explosion-like sounds.

Maria Sfeir, who was a passenger on the ME242 flight, said in a response to IntelSky Twitter thread that “After they [F-16 Jets] flew away, the cabin crew reassured us from the captain that these were regular trainings that were notified in advance by the airline.”

Mohammad Alhout, the pilot’s father, has previously been criticised after hiring relatives at different levels of the company, Libnanews reported.

In a statement released on Monday, caretaker Minister of Public works and Transport, Ali Hamieh said that "the Ministry underlines the need to communicate with the General Directorate of Civil Aviation at Rafic Hariri International Airport as an authorized body when dealing with any news related to it."

The reason behind Hamieh’s statement is to preserve the circulation of credible news related to the ministry of public works and transport and preserve Lebanon’s global reputation.

The statement also explained the circumstances surrounding the incident and that the Lebanese aircraft had contacted the Greek authorities twice after entering the Greek airspace.

IntelSky replied to the statement, in a thread on Twitter, saying that “ we reported the news from Greek sources, not from us.”

“How can you say that the plane communicated with the Greek authorities, and despite that, the fighter came a few meters away from your civilian plane? Is this normal? Please be fair. Pilot experts can confirm the invalidity of this statement,” IntelSky added.

The admin of IntelSky also added that they agree with Hamie’s statements that “Lebanon does not need additional bad news about it. But this does not mean that you should not be realistic in your statements when you deny any true news.”