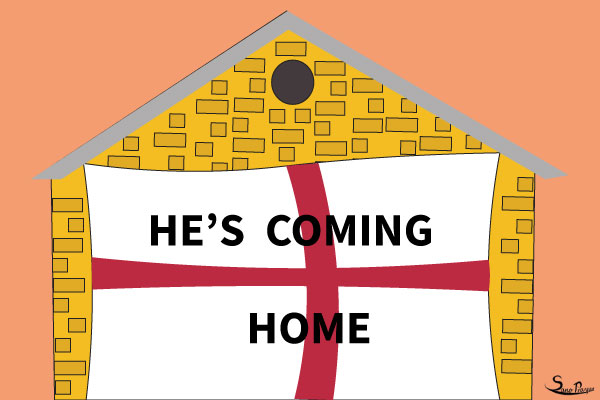 The noise of keys opening closed doors, the creaking of the door, the one person who is feared sitting by the sofa trying to make his presence known through squeezing, patting, grabbing, and rubbing someone or even demanding sex with their partner as soon as they arrive. This may sound like a movie but this time is a scary time and a time of compromise for many women as their partners are here to stay watching the matches.

As we have the celebration and cheers of the World Cup 2022 going on this year, there is also something dark going on in the background of these noises. Not all people enjoy these occasions though such major tournaments and sports events bring joy, a feeling of belonging, and togetherness to a community. The ‘He’s Coming Home!’ campaign highlights this occasion's dark side.

The campaign ad starts with showing houses where people are cheering and people enjoying watching the game and it turns to one house with a flag warning ‘He’s Coming Home.’

The campaign focuses on the fact that more men will be staying at home to watch the matches and domestic violence cases have been increasing by 38% around this time.

Women’s Aid organization working to reduce domestic abuse has been warning of the increasing domestic violence around this time. It is a time of football fans watch games at home, and it's winter, making people stay indoors. During this time it is highly likely that the families, friends, and groups being together shouting, supporting, and cheering on their teams in this football fever will dim the shrill shouts, cries, and clashes going on in the neighborhood when women being abused physically, mentally, or emotionally. Such environments will take the attention of people to be aware of what is happening to women who need immediate attention and help.

Football fever goes well with the consumption and overuse of alcohol leading to verbal and physical abuse if the partners were already unhealthy and toxic in nature. Moreover, such men as partners turn abusive and life-threatening as they become violent towards their women and children as they are less likely to be known or stopped by others.

During the pandemic, it was also proven that chances of violence and domestic abuse increase within enclosed doors. This was named the ‘Shadow Pandemic’ by the UN as violence behind enclosed spaces peaked worldwide.

Hence, the winter, doors enclosed and football craze is also a perfect recipe for such families to have a disastrous time as the Women's Aid campaign is trying to show us.

We should know that such festive-like events are not a relaxing and chilling time for everyone. As most of us enjoy the celebrations of the World Cup on every screen, for some women this is a time that gives them dreaded goosebumps and chills!

So, I hope we are also aware of the possibility of such issues and events happening place around us if and when it does.

Every year November 25th to December 10th has been a time to spread awareness and push forward to end violence against all girls and women. It is formally called the #16DaysofActivism. UN has given the theme UNiTE! to encourage us to unite to end gender-based violence. Thus, I hope we can use this period well to focus on this important issue. I hope we can keep everyone safe and let everyone enjoy this time.

In the comments, let us know how you want to help reduce domestic violence.

Children Programming: How virtual education is influencing kids and millennials