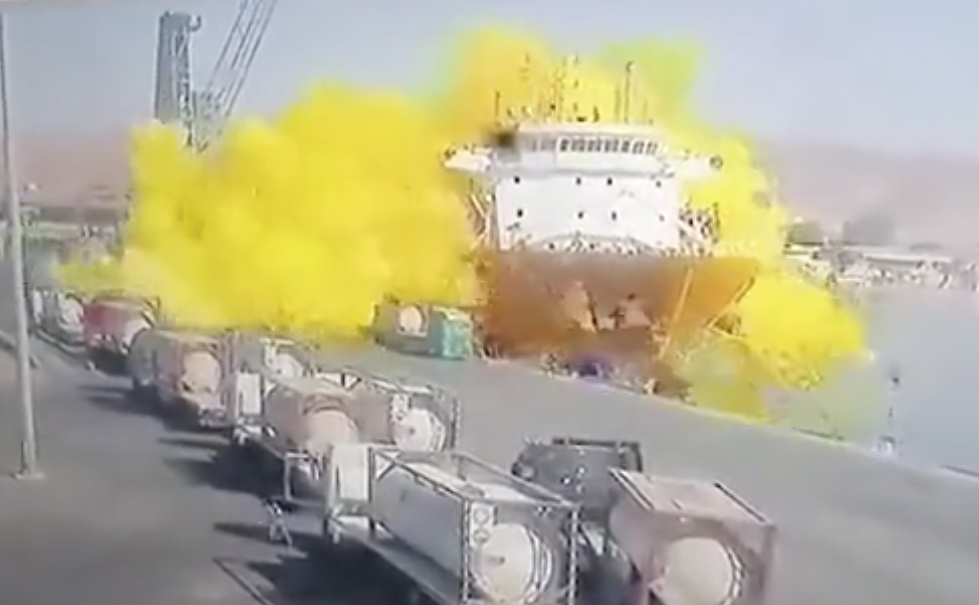 Last Monday, a toxic chlorine gas leak killed at least 13 people and affected over 250 others in Jordan's Red Sea port of Aqaba. Authorities have reported that residents were instructed to close their windows and stay inside.

According to statements, the leak occurred after a tank's cable carrying more than 25 tones of chlorine snapped and the container crashed. As a result, the toxic gas spread throughout the surrounding area.

Haj Hassan, the deputy chief of the Aqaba Region Ports Authority, confirmed the accident in a statement to a local broadcaster, explaining how the leak occurred.

Aqaba is a large and busy port in the Red Sea's northwestern region. Its routes are of major importance because they connect routes all over the Middle East, including Iraq's imports and exports.

Later, CCVT footage was released, showing how the container was held by the cable, suddenly carried in the air, dropped, and then exploded on the ship. The toxic gas quickly spread throughout the area.

It wasn't long before the authorities warned residents not to go outside and to close their windows as chlorine gas is a common cleaning agent that can also be used as a chemical weapon.

By pressurising and cooling the gas, chlorine can be transformed from a yellow-green gas to a liquid. Shipments can be used to store the liquid. However, chlorine is a poisonous element, and when it comes into contact with humans, whether by inhaling or swallowing, the acid causes cell damage. Inhaling it, in particular, causes high levels in the lungs, which can lead to death.

The former CEO of the company in charge of the shipment, Mohammed al-Mubadin, has commented on the dangers of this gas by clearly outlining the situation. According to reports, the container contained a large proportion of chlorine. This indicates that the gas was extremely heavy, making it difficult to avoid affecting the zone.

Following the accident, officials and ambulances were dispatched to the most affected area. To begin, approximately 199 people were transported to hospitals and treated. However, 13 people were killed. Residents explain that “they didn't hear any explosion. They just smelt something noxious and saw the yellow smoke, then there were people choking.”

Recently, Health Minister Firas al-Hawari confirmed that 332 residents were admitted to the hospital late Tuesday, with only 50 remaining in treatment.

As a result, the affected residents have experienced similar symptoms such as shortness of breath, heavy coughing, fatigue, and vertigo.

Jordan's Prime Minister, Bisher al-Khasawneh, has visited Aqaba and the hospital where the injured are being treated. He has sent his heartfelt condolences and has already directed the Interior Minister to launch an extensive investigation into this tragedy and "to guarantee all resources to ensure the total security of workers at the ports and all necessary precautions in relation to hazardous materials".