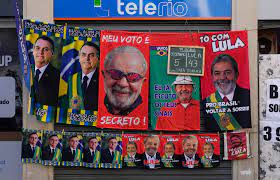 Brazil’s election is going into the second round in which left-winger Luiz Inácio Lula da Silva, known colloquially as Lula will face far-right incumbent Jair Bolsonaro. So far, the votes counted show Lula obtaining 48% of the vote and Bolsonaro with 43%, but Lula fell short of the 50% margin to prevent a runoff.

For many of Brazil’s Left Sunday’s election results were a disappointment. Many activists and voters were hoping for a majority, but Lula still aims to gain votes from smaller Left-Wing parties that drop out.

Both candidates have used social media to their advantage throughout the campaign, with them dominating TikTok as a way to attract younger voters. Lula has been President of Brazil between 2003-2010, but could not run for President during the 2018 elections, as he was currently in prison after being convicted on corruption charges.

Throughout Lula’s presidency, Brazil saw a decline in inequality and economic growth.

Yet, Brazil remains a disquieted nation; Bolsonaro is accused of neglect as President. During his time, his mismanagement of Covid led to around 700,000 Brazilians dying, by undermining vaccination attempts and peddling dangerous anti-Covid cures.

Many citizens describe Bolsonaro's presidency of Brazil as a brothel with no pimp. Many voters care about the high levels of poverty in Brazil, education, rising food prices and hunger. Bolsonaro is backed by former President Donal Trump and Victor Orban.

Lula has campaigned to maintain the Amazon rainforest to protect the environment and also the inhabitants of Indigenous Brazilians. Deforestation drastically increased under Bolsonaro and he argues that parts of the rainforest should be open to economic exploitation.

Yet, Lula’s record as President was no panacea for Brazil either. Deforestation still occurred under Lula, but to a lesser extent than Bolsonaro, and Lula’s period incarcerated for corruption questions the stability and integrity of his time in office.

The Guardian Brazilian correspondent Tom Phillips described this election as ‘toxic’. Although Lula current leads in the polls, many political analysts believe this to be a repudiation of Bolsonaro rather than a vote for Lula. The immense damage brought to Brazil under Bolsonaro, one of increased inequality, mass Covid deaths and the burning of the Amazon forests has left many Brazilians pessimistic about its future. Voters who may not be ideologically Left-wing voted for Lula, as a way to stop what many saw as dangerous leadership under Bolsonaro.

However, there remains fierce support for Bolsonaro. The show of strength from the right - not just from Bolsonaro but prominent Bolsonaristas who were also elected to parliament has taken many by surprise.

"Bolsonarism is much more alive and has a further reach than people had thought and polls had captured," says Esther Solano, a political scientist and Bolsonaro expert. At a speech after the election results, Bolsonaro promised that Brazil would never become Venezuela, a talking point that many on the Right favour as a sign of communism in Latin America.

This election remains hostile and unstable, with both Lula and Bolsonaro having an equal chance of becoming President, now, only time will tell.

Who is Lula da Silva?