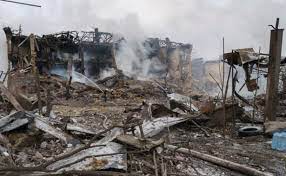 According to reports, three persons were killed in Dnipro, Ukraine, after Russian long-range cruise missiles struck a space rocket facility and a nearby road. According to local authorities, the incident left three people dead, fifteen others wounded, and numerous surrounding residential structures damaged. Two more people perished, according to a regional official, after dozens of Russian missiles were launched at Nikopol, south of Dnipro.

Valentyn Reznychenko, the regional governor, posted on Facebook that "the missile hit an industrial plant and a major road next door." He stated: "Three persons lost their lives due to a Russian assault. Other injuries totaled fifteen." We are figuring out how much damage there is.

In the north, Russian missiles killed people when they struck homes in Chuhuiv, a town close to Kharkiv.

Reports from the capital, Kyiv, say there has been an increase in air attacks as Russia's ground offensive in the east has slowed down, frequently hitting city centers. Air raid sirens were audible last night in several Ukrainian cities.

A graphic photo from Dnipro following this morning's air attack shows a man lying face down, his head covered in blood. Later, it was discovered that the man was a nearby bus driver who had just concluded his duty.

In a Facebook post, Dnipro mayor Borys Filatov encouraged civilians to leave the city. "It's not safe for women, children, and the elderly, and those who can and want to leave should leave," he said.

He lamented that after repeated missile attacks on the airport, attacks on the city's periphery, shots at the central bridge, and bombings of oil storage and service station, "people stubbornly continued to disregard the air raid sirens."

After the catastrophes in Kremenchuk and Vinnytsia, he claimed that he had been expecting that other citizens would continue to stay watchful.

Twenty-two killed in a Russian rocket attack in Vinnytsia, Ukraine