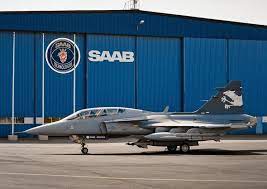 After Sweden formally joins NATO, the aerospace & defense giant Saab based out of Stockholm is expected to experience tremendous development.

Saab, which was first well-known for its autos, has evolved into a powerful aerospace & defense industry.

Saab specializes in making aircraft. They reached an agreement with the Swedish government on June 30 to give them two GlobalEye early-warning planes.

NATO membership currently appears inevitable for Sweden as a result of the Turkey-Sweden agreement, whereby Sweden will crack down on Kurdish political elements in exchange for Turkey supporting Sweden's participation in NATO. Sweden's full integration into the Western bloc seemed inconceivable before Russia invaded Ukraine. Sweden has been neutral and dedicated to the non-aligned movement for a very long time.

Olof Palme, a former Swedish prime minister and the intellectual founder of the country's social democratic welfare state, placed a high priority on an anti-colonial, non-aligned foreign policy and frequently criticized Western imperialism and the Warsaw Pact's repression. The first Western leader to acknowledge the Cuban revolutionary government was Palme. The demise of Palme's concept and a huge commercial opportunity for Saab resulted from NATO membership.

Saab is thrilled about the implications joining NATO will have for its business. Saab's CEO, Micael Johansson, commented on the possibility of Swedish NATO membership, saying, "You become a part of the inner circle, and therefore you can access that market in a more equal way."

Johansson was right. Saab will be able to obtain additional contracts from NATO nations after joining the alliance. Massive bids from NATO nations, particularly Baltic ones eager to enhance their early warning systems on the Russian border, will be made for aircraft like the aforementioned GlobalEye system.

However, the Gotland-class submarines made by Saab might be the real prize. The submarines from Gotland are remarkably powerful and silent. A Gotland submarine proved successful in sinking the USS Ronald Reagan carrier in a US Navy scenario.

Johansson was correct. Saab will be able to secure additional contracts from NATO nations once they become members. NATO nations, particularly those from the Baltic region who want to enhance their early warning systems on the Russian border, will make large bids for aircraft like the aforementioned GlobalEye system.

Throughout NATO's unsuccessful war in Afghanistan, defense contractors made over $7 trillion. The Ukraine conflict is headed for a brutal standoff that might last for years.

This means more suffering for the Ukrainian people but more money for the weapons industry. This creates the unsettling possibility that defense companies like Saab would be in charge of statecraft rather than actual governments.