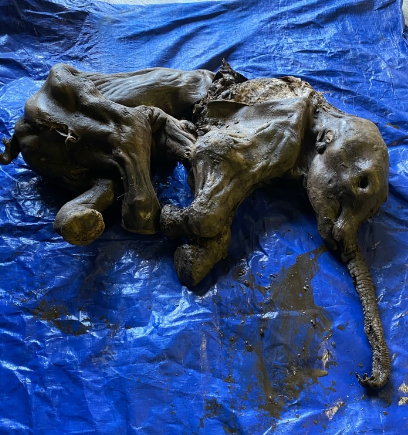 June 21 was supposed to be a typical day for Travis Mudry, a miner working in the Klondike goldfields of Canada’s Yukon territory. However, while cutting into the permafrost (frozen earth) to access some gold deposits, a block fell off the wall. This revealed a small animal, with little legs and a trunk, almost perfectly preserved. The creature, initially believed to be a buffalo, turned out to be a baby mammoth, and the most well-preserved ever retrieved in North America.

Mudry reached out to his boss, Brian McCaughan, that immediately took some pictures to send to experts for better identification. Grant Zazula, a paleontologist of the Yukon government, responded to McCaughan’s call for assistance and arranged for his colleagues to meet with McCaughan and Mudry, as he was six hours away from the site. The two geologists from the Yukon Geological Survey and the University of Calgary met with the workers to arrange for the retrieval of the animal before the storm hit the discovery site.

Once secured, the baby mammoth was transferred to a secure location for a ceremony reuniting scientists, politicians, and elders from the indigenous population that inhabits the territory of the discovery site, the Tr’ondëk Hwëch’in. An elder of the community said in a statement: “It took my breath away when they removed the tarp. We must all treat it with respect. When that happens, it is going to be powerful and we will heal. We must as a people”.

The animal was named “Nun cho ga”, meaning big baby animal in Hän language. From the analysis conducted, Nun cho ga, a female, was about one-month-old when she died. The quick death caused by the permafrost is what likely led to such pristine preservation. The ice was able to deliver to us the skin, hair, and muscle virtually unaltered. Nun cho ga is the second mammoth in the world unearthed in such good conditions.

Permafrost has guaranteed the conservation of many other animals over the years, such as wolves and camels. The abundant remains in the region long guaranteed cooperation between miners and scientists, including the Tr’ondëk Hwëch’in population. They allow outsiders to analyze their territory. The indigenous elders ensure it complies with their laws and cultural heritage. At the same time, scientists are concerned with reconstructing the lives of these animals and retracing their steps during the Ice Age.

The commitment to cooperation professed by all the parties involved, from the Tr’ondëk Hwëch’in nationals to Yukon government officials, comes at a time when scientists are becoming increasingly aware of their impact on indigenous communities. The latter seek better partnerships with scientists to avoid damaging their land and people, while actively contributing to scientific research.

In the past, many researchers disregarded ethics in favor of their work, which sometimes risks damaging the communities and augmenting their sentiment of distrust towards scientists. Today, this is changing, as seen by the cooperation fostered by the government in the Yukon region and the new constitution for which activists are fighting in Chile. The outcome of these initiatives is yet to be assessed, though the successful retrieval and ceremony in honor of Nun cho ga point towards progress.