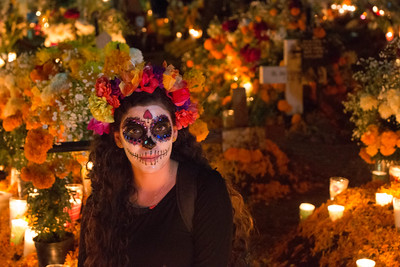 Oaxaca, Mexico is on the final day of their Dia de Los Muertos or Day of the Dead festival, ‘Ofrenda.’ The festival was held at a restaurant and bar called Archivo Maguey located in the heart of the city. It held different themes every night and special drinks in order bring people together in celebration of the annual Mexican tradition.

Ofrenda is the Spanish word for ‘offering’, which is used to describe the altars that are made each year during the holiday for now-departed loved ones. The altars typically consist of cempasuchitl flowers, ‘papel picado,’ pictures of the relatives, candles and ‘pan de muerto.’ Usually, the holiday lasts for two days, but the Oaxaca festival lasted for eight.

This ‘Ofrenda’ festival was not a large altar that brought people together in the city of Oaxaca, but instead an eight-day-long party with music and drinks that valued life, honored the dead, and made love a focal point of its celebrations.

Some of the themes included:

Each night brought people together through music, including live bands and DJs that fit the theme for the night. Archivo Maguey encouraged people to attend each night dressed in typical Day of the Dead style, including the likes of the Catrina skulls and masks.

The Catrina style skull is an important symbol for the holiday. It is a tall, female skeleton usually dressed in bright-colored feathers and flowers that has existed since the early 1900s. She has been seen as an essential part of the celebrations, as women paint their faces to resemble the goddess of death that Aztec cultures have honored throughout history.

Not only did Oaxaca celebrate through nightlife, but also during the day, with a list of events that both children and adults could attend. There were several gatherings to enjoy traditional Dia de Muertos food like ‘pan de muerto,’ mole, and tamales. Events were held in the Plaza of the city, municipal buildings, and neighborhood streets, allowing everyone to have the opportunity to attend.

People all around the globe celebrate the dead in their own ways, such as practices for ‘All Saints Day’ or ‘All Souls Day.’ ‘Dia de los Muertos’ is unique to Mexican tradition, with the cempasuchitl flowers on the ofrendas, La Catrina style skull, the food, and festivities held on Mexico’s streets.

Annual Mexican Festival is back on after pandemic finally dies down